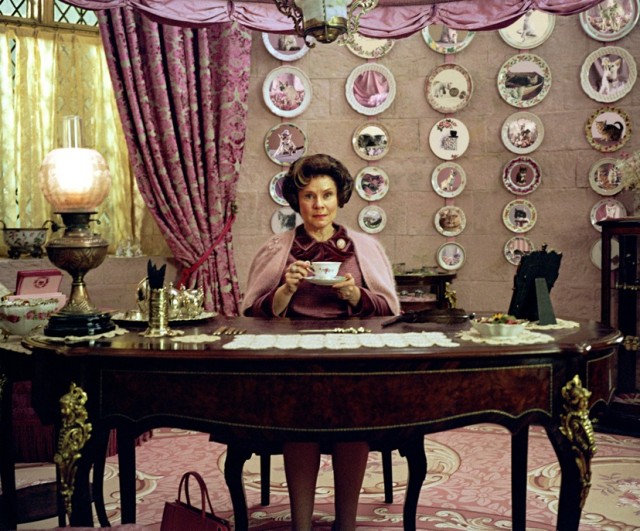 As a Halloween treat to Harry Potter fans, J.K. Rowling has posted some new writing related to the Harry Potter universe on her Pottermore fansite, including a new short story about the fictional world’s second-worst villain, professor Dolores Umbridge.

Even though the Harry Potter series ended more than seven years ago, when the seventh novel Harry Potter and the Deathly Hallows was published, Rowling has lately been adding bits and pieces to the Harry Potter universe via short stories published on the Pottermore website. Earlier this summer, she wrote a satirizing tabloid piece that saw a middle-aged Harry and friends attending the Quidditch World Cup. The story was written from the perspective of the fictional Daily Prophet gossip columnist Rita Skeeter.

Halloween was the perfect time to share more with Potter fans about one of the most evil characters in the wizarding world. “Dolores … is one of the characters for whom I feel the purest dislike,” Rowling wrote in a note at the conclusion of the 1,700-word story. “Her desire to control, to punish, and to inflict pain, all in the name of law and order, are, I think, every bit as reprehensible as Lord Voldemort’s unvarnished espousal of evil.”

When Stephen King reviewed Harry Potter and the Order of the Phoenix, the book that introduces Umbridge’s character, for Entertainment Weekly, he said: “The gently smiling Dolores Umbridge, with her girlish voice, toadlike face, and clutching, stubby fingers is the greatest make-believe villain to come along since Hannibal Lecter.” If even horror master Stephen King thinks she’s scary, then she’s the perfect villain to write about for Halloween.

In the story, Rowling shares that Umbridge is not actually a pureblood witch as she pretends to be, but has a Muggle mother and a Squib (a child of a wizard or witch without magical powers) brother. She and her wizard father separated from her mother and her brother during her childhood and never them saw again. Dolores became a master manipulator early on and unscrupulously climbed her way up the career ladder at the Ministry of Magic. Later on she is appointed the Defense Against the Dark Arts professor at Hogwarts, which is where Harry Potter finally encounters her.

Rowling points out that other than Voldemort, Umbridge is the only character ever to leave a permanent physical mark on Potter when, during detention, she forces him to write “I will not tell lies” with a magical quill that carves the phrase into his flesh.

Rowling also revealed that the inspiration for Umbridge’s character came from a teacher the author had in real life, “whom I disliked intensely on sight,” she said. “The woman in question returned my antipathy with interest. Why we took against each other so instantly, heartily, and (on my side, at least) irrationally, I honestly cannot say.” Rowling went on to explain that she also took the inspiration for Umbridge’s love of girlish accessories and items decorated with kittens from this real-life figure, as well. “I have noticed more than once in life that a taste for the ineffably twee can go hand-in-hand with a distinctly uncharitable outlook on the world,” Rowling continued.

Umbridge was portrayed memorably by Imelda Staunton in the Harry Potter films.