J.K. Rowling’s New Book: What to Know About ‘Career of Evil’ 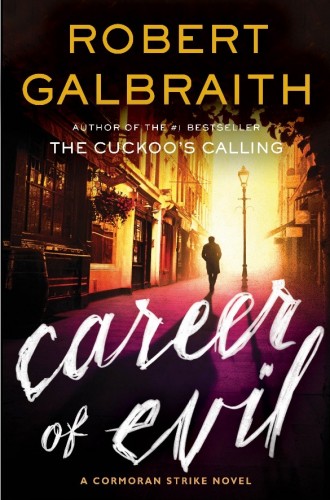 A new J.K. Rowling book is finally headed our way. A year after the publication of her last novel, 2014’s The Silkworm, the best-selling author has announced that her latest work, Career of Evil, will hit shelves this fall. Career of Evil is the third book in Rowling’s mystery series written under the pseudonym Robert Galbraith. The Galbraith novels center on London private detective Cormoran Strike and his partner Robin Ellacott as they investigate various disturbing crimes. Rowling revealed the details of the new release, as well as the first look at its cover, on both her Twitter page and that of her “good friend” Galbraith. As the synopsis explains, Career of Evil will follow as Strike and Robin tackle their latest sinister case – one that begins with Robin receiving a mysterious package containing a woman’s severed leg. While she’s understandably horrified, Strike is less surprised but still alarmed. There are four people from his past that he believes could be responsible, any one of which he knows are “capable of sustained and unspeakable brutality.” With police focusing on one suspect that Strike believes is actually innocent, the two decide to take matters into their own hands and investigate the worlds of the three other suspects. But as more horrendous acts occur, the pair realizes they have to move quickly before they run out of time. Rowling published her first Cormoran Strike novel under Galbraith’s name, The Cuckoo’s Calling, in 2013 and was outed as the real author a short time later. After the pseudonym was revealed, the book quickly jumped to the top of the bestsellers list. Its sequel, The Silkworm, was published last summer. It’s unclear how many books the series will consist of, although Rowling has previously stated that she intends to keep it going longer than the seven-part Harry Potter franchise. Both The Cuckoo’s Calling and The Silkworm earned widely positive responses from critics and the general public alike upon their debuts. Whether Career of Evil will earn similar critical acclaim remains to be seen, but from the sounds of the synopsis, readers are in for just as thrilling and suspenseful a mystery in the new book. But the new novel isn’t the only way that the Cormoran Strike franchise is growing. Back in December, it was announced that the BBC, the same channel that brought Rowling’s The Casual Vacancy to screen earlier this year, is planning on adapting the crime novels into a television series. Though specific details (including casting news and number of episodes) haven’t been revealed yet, Rowling will reportedly be collaborating with the channel on the project. That isn’t the only adaptation of Rowling’s works currently underway. Warner Bros. has recently recruited Oscar winner Eddie Redmayne, as well as Inherent Vice actress Katherine Waterston, to star in it’s upcoming Harry Potter spin-off, Fantastic Beasts and Where to Find Them, based on Rowling’s 2001 book of the same name. The popular author will make her screenwriting debut with the highly anticipated feature, scheduled for release in 2016. With two screen adaptations and another novel from the author on the way, it’s clear Rowling’s fans have plenty to look forward to over the next year. Career of Evil, which is already available for pre-order, is scheduled for publication on October 20.