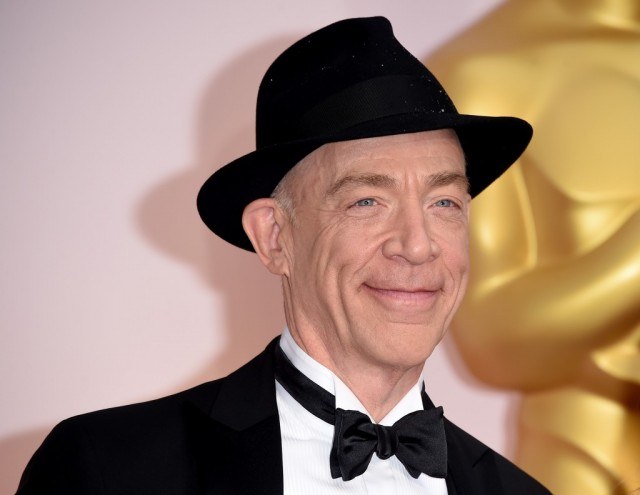 J.K. Simmons is following up his Oscar win with a return to the small screen. The Whiplash star has reportedly signed on to headline Starz’s new supernatural drama, Counterpart.

Counterpart is described as an espionage thriller with a metaphysical twist. It stars Simmons as Howard Silk, a low-level worker in a bureaucratic U.N. agency who has spent his whole life filled with regret. Things change when he suddenly uncovers that the agency is hiding a massive secret: It has access to a crossing to a parallel dimension. The show will navigate themes of identity, idealism, what ifs, and lost love through the eyes of Howard and his “counterpart” on the other side, Prime.

In addition to starring the Academy Award winner, the forthcoming series will feature a noted team behind the camera. According to The Hollywood Reporter, the series is created and written by Justin Marks (The Jungle Book). Director Morten Tyldum, who is also just coming off his Academy Award nomination for The Imitation Game, is attached to helm the first two episodes of sci-fi drama. Both Marks and Tyldum will executive produce with Anonymous Content’s Bard Dorros and Keith Redmon (True Detective, The Knick), and Gilbert Films’ Jordan Horowitz and Gary Gilbert (The Kids Are Alright).

With such acclaimed names behind it, it’s no surprise that Starz clearly has high hopes for the drama. Per THR, the network is reportedly eyeing a two-season pickup for the show.

Counterpart comes at a notable time for Simmons, who earned critical praise and won a Best Supporting Actor award at the Oscars for his acclaimed turn in the music-themed drama Whiplash earlier this year. The show will mark a return to the small screen for the actor, following his more recent focus on feature films.

Simmons has plenty of experience top-lining a television series. He’s best known for his chilling performance as Vern Schillinger on HBO’s Oz and Assistant Chief Will Pope on The Closer. He also previously starred on Law & Order and NBC’s 2014 short-lived series Growing Up Fisher.

Counterpart is only the latest show that Starz has added to its roster in recent months. The network is also developing the drama The One Percent, which is co-created by Oscar-winning director Alejandro González Iñárritu and will star Ed Helms, Hilary Swank, and Ed Harris. The sitcom Blunt Talk, starring Patrick Stewart, and the drama miniseries Flesh and Bone, are both expected to air sometime later this year.

So far, there are no specific details regarding a filming schedule for Counterpart or a potential premiere date. In the meantime, Simmons has a busy year ahead on the big screen. He will co-star alongside Arnold Schwarzenegger and Jai Courtney in this summer’s highly anticipated Terminator Genisys and will also reportedly appear in the family romance drama Worlds Apart.

Simmons has several films due out next year as well. The actor is currently filming the comedy drama The Meddler alongside Rose Bryne and Lucy Punch. He is also set to star with Anna Kendrick and Ben Affleck in the action thriller The Accountant, and the forthcoming drama The Lake. Also on his docket of upcoming projects is starring alongside Tom Hiddleston in the highly anticipated action adventure fantasy flick Kong: Skull Island, due in theaters in 2017.