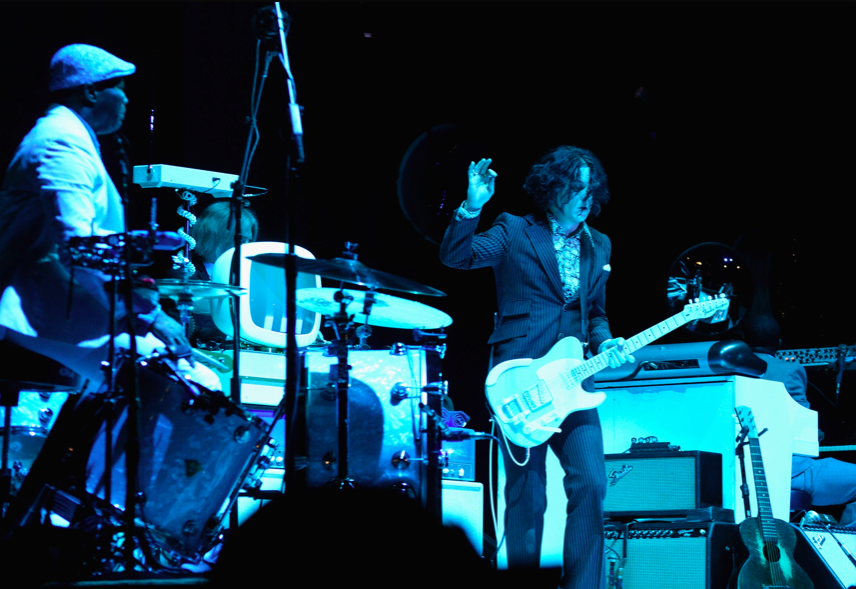 Jack White’s second solo album, Lazaretto, debuted in first place on the Billboard charts last week and broke the record for the largest sales week for a vinyl album since Nielsen SoundScan began measuring vinyl sales in 1991. That spot was formerly occupied by Pearl Jam’s 1994 album Vitalogy, which sold 34,000 vinyl copies during its first week. According to Billboard, which reports Nielsen SoundScan’s data, Lazaretto sold 40,000 copies of the vinyl LP and 138,000 copies overall during its first week on the charts.

White has been a champion of vinyl for years, with his Nashville-based Third Man Records promoting the format through a variety of projects, which have included a plethora of colored records, an LP that when cracked open had a 7-inch hidden inside, and even a rose-scented vinyl album. White has been an active participant in national Record Store Day, which is celebrated on the third Saturday in April and promotes listening to vinyl and shopping at local, brick-and-mortar record stores. In 2013, White was named the official ambassador of Record Store Day, and Third Man released a 10-year anniversary edition of the White Stripes classic Elephant in the duo’s signature colors, with black-and-red vinyl on one side and white on the other other.

For Record Store Day 2014, White promoted what he called the “world’s fastest studio-to-store record.” In the early morning, White performed the as-yet-unheard title track from Lazaretto as well as a cover of Elvis’s “Power of My Love” in Third Man’s performance space called the Blue Room, which is equipped with technology that can cut live performances direct to acetate. After the master was finished, he rushed it to Nashville’s United Record Pressing, where copies were made and sold to fans that lined up to get their hands on the 7-inch, which would only be available at Third Man on that day.

For his second solo album, White went all out to create what he calls an “Ultra LP” filled with Easter eggs and never-before-done tricks. Certain areas of the album can be played at all three different speeds (33 rpm, 45 rpm, 78 rpm), there are hidden songs under the labels on both sides of the album that can be played through the paper, the A side must be played from the inside of the record out, and both sides of the record contain a locked groove so that when they’re finished playing, either the last spurts of noise on the instrumental “High Ball Stepper” (side A) or the sound of crows cawing (side B) continue repeatedly until the record is stopped.

Since side A plays from the inside out, that locked groove is located on the outside of the album, something that White says hasn’t been done before. The record also contains a floating angel hologram created by the artist Tristan Duke that appears in the light near the inside of the LP when the album is spinning. This isn’t all of the album’s firsts and Easter eggs — Third Man released a nearly 10-minute video to explain all the aspects of the Lazaretto Ultra LP.

On a recent appearance on Conan, White said that the vinyl for Lazaretto “is my proudest moment with Third Man Records, this object.” White’s fans tend to share his belief in music as a tangible and communal art form, and so are more likely to be vinyl buyers. White went all out with the Lazaretto LP, giving his fans and vinyl lovers in general plenty to be excited about with the record. Considering that the LP also comes with a digital download credit so that you can listen to Lazaretto on your phone or in the car, as well, there’s even less reason to download the album from iTunes instead of picking up the vinyl.