Janis Joplin: How She Became a Music Icon

Janis Joplin wasn’t just a singer. For many, she helped define an entire generation. Before she was 27 years old, she built an iconic music career with her unforgettably gritty voice.  Her death, 45 years ago this month, was a tragic symbol of how the rock ‘n’ roll lifestyle caught up to many talented artists. But we can still celebrate Joplin’s short life and the influence she had on 1960s counterculture.

Born to a devoutly religious family in Port Arthur, Texas, Joplin always lived a little bit outside of the mainstream. Her early interest in blues music and love of the Beat poetry movement drove her toward the Haight-Ashbury neighborhood in San Francisco. There, she found a way to express her artistic sensibilities. By 1966, she’d joined up with Big Brother and The Holding Company, a psychedelic rock group whose groovy sound perfectly showcased her soulful, unique voice. The rest was history.

Critics and music fans began to take note of Joplin’s unique sound. Big Brother and The Holding Company’s recording of “Piece of My Heart” is considered by some to be one of the greatest rock and roll performances of all time. After a stunning show at the Monterey International Pop Festival, Joplin overshadowed the band to emerge as a predominant voice within the rock ‘n’ roll community. Time called her “probably the most powerful singer to emerge from the white rock movement.” Soon, she was ready to venture out on her own. 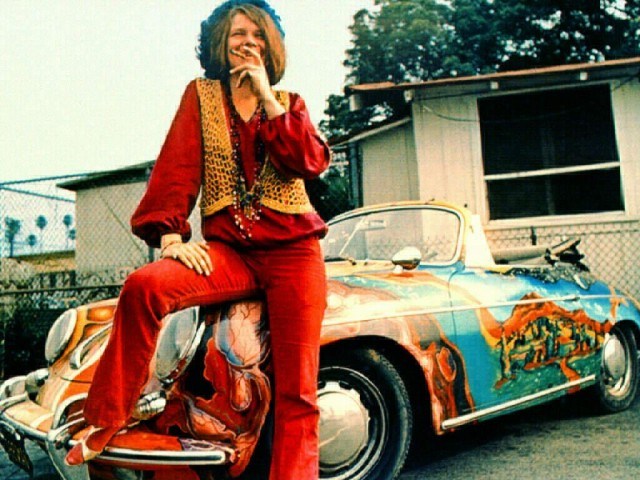 A Singer and a Symbol

Joplin formed two groups of her own — Kozmic Blues Band in 1969 and Full Tilt Boogie Band in 1970. She was a headliner at the Woodstock music festival, performing songs like “Work Me, Lord” and “Ball and Chain.” She joined Jimi Hendrix, Joni Mitchell, and dozens of other legendary artists at a memorial tribute for Martin Luther King, Jr. It seemed as though everywhere she appeared on stage, she mesmerized audiences with her ability to deliver magnetic, powerful performances.

But it wasn’t just her music that made her famous.  In many ways, Joplin embodied the rebellious social movement of the late ’60s. She wore her hair long and her clothing loose. She smoked and drank a lot. She spoke her mind, once even getting herself arrested for vulgarity at a concert. She bought a Porsche 356C and painted it in psychedelic patterns and colors. Unfortunately, her own involvement in the counterculture fueled her growing drug and alcohol dependency. And that addiction would eventually take her life.

Joplin died of a heroin overdose on October 4, 1970. Music fans, fellow artists, and critics were all stunned by her death, and almost instantly began to commemorate her legacy. Her New York Times obituary revered her for singing with “more than her voice. Her involvement was total.” Many others commended her for her electric stage presence and one-of-a-kind vocal stylings.

As is the case with many artists, Joplin’s most admired work wasn’t even made public until after her death. But her throaty, soulful performances in the posthumous album, Pearl, have gone on to make her an unforgettable music icon. Recordings of “Cry Baby,” “Mercedes Benz,” and her only number one hit, “Me & Bobby McGee” made her a multi-platinum selling artist and one of the most successful musicians of all time.

In 1995, she was inducted into the Rock and Roll Hall of Fame for her contributions to the psychedelic rock movement. Rolling Stone named her one of the 100 Greatest Singers of All-Time, stating that in her time she was “the woman in rock.” She inspired trends and paved the way for countless other artists, from Stevie Nicks to Gwen Stefani. And though she didn’t get to witness the way her music took on a life of its own, she lived with a passion that few will soon forget.