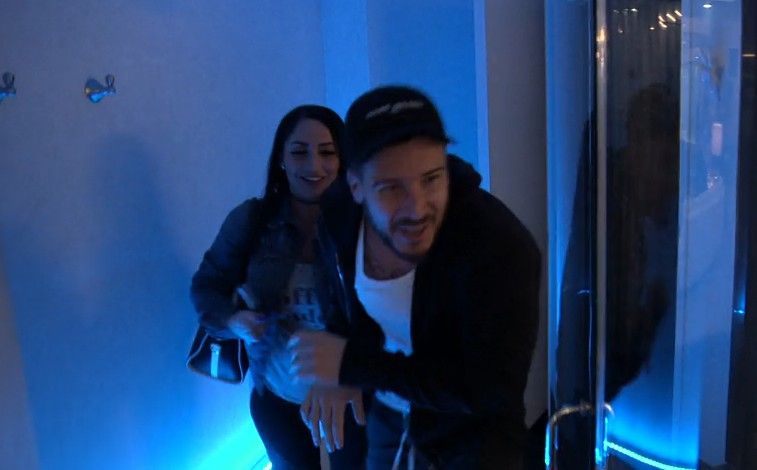 Angelina Pivarnick is back for Jersey Shore: Family Vacation Part 2. Unsurprisingly, she is still having problems with her former roommates. But there is a new theory floating around why she doesn’t get along with a specific one. Are Pivarnick and Vinny Guadagnino fighting because they’re still into each other? That is what some of their cast members think. Here are four things to know about the rumor they hooked up again.

1. Vinny Guadagnino and Angelina Pivarnick previously hooked up in Season 2

The former roommates did already hook up in Season 2. The two kissed in a cab, but they weren’t very happy about it afterward. “I was drunk, that’s about it,” Pivarnick said the next day.

2. Ronnie Ortiz-Magro claims there is sexual tension between Guadagnino and Pivarnick

In the episode “Heartbreak Hotel,” Guadagnino and Pivarnick quickly got into it and she even slapped him. She did apologize, but Ronnie Ortiz-Magro said that their fighting could be something more.

“You guys fight all the time. You have like, one more hate bang to get out,” he said. Pivarnick quickly shot that idea down with “No, I’m not f*cking DTF anymore, Vin.” She then continued, “Been there, done that with you. I honestly don’t remember your d*ck. I’m not being mean. I’m not saying it’s small. I’m saying I don’t remember!”

3. Pauly D has since said he believes the two have hooked up again

The Paul “DJ Pauly D” DelVecchio said he believes the two have hooked up again. “I believe it, I don’t know, I believe it,” he told OK! But he later noted this wouldn’t be a good thing considering Pivarnick is in a serious relationship. “She’s engaged, though, so if they did [hook up], that’s a problem for her.”

4. Pivarnick did previously hint there could be something more between them

In another interview with OK!, the cast talked about Pivarnick and Guadagnino’s relationship. “There was Angelina smacking Vinny but also wanting to hook up with Vinny,” said Jenni Farley. Pivarnick then said, “and Vinny wants to hook up with me.” DelVecchio then said to Pivarnick, “you cheated.”

Pivarnick later clarified that she is engaged and fans will just have to wait and see what happens. But Farley then said, “you didn’t care.” Pivarnick did say her fiancé will get mad at her this season.