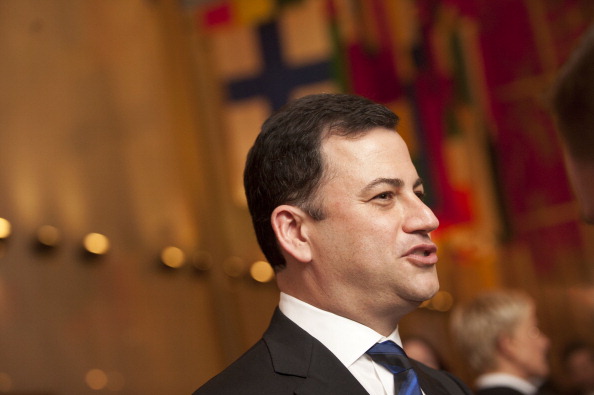 Apologies to Matt Damon, but Jimmy Kimmel isn’t running out of time. According to Reuters, ABC has extended Kimmel’s contract by two years. Kimmel’s program Jimmy Kimmel Live! is already the longest running talk show in ABC’s history; it premiered after the Super Bowl in 2003 and has established itself as one of the preeminent talk shows on television.

Kimmel earned a name for himself as the co-host of The Man Show (1999-2004), along with Adam Carolla (whose career since has been significantly less impressive than Kimmel’s.) Both Kimmel and Carrola left in 2003 to pursue other ventures, and the show went belly-up shortly thereafter (there’s probably some lame pun to be made regarding the girls on trampolines, but that’s best left to wiser authorities.)

After The Man Show, Kimmel hopped over to ABC, where he’s been sitting comfortably for 11 years. Jimmel’s show stood out from the pack of then-popular talk show gurus Jay Leno and David Letterman, the former of whom has been basically excommunicated from late-night, and the latter of whom who will be retiring next August.

Kimmel brought the sardonic edge that made The Man Show a surprisingly clever affair (stop women’s suffrage, anyone?), which set him apart from the old fogies and actually aligned him more with the irreverent wit of Letterman’s early years, in which the bespectacled host smooshed things with a hydraulic press, titled his camera 90 degrees, flipped the image backwards, and generally did weird things for our (and his) amusement. Call it late-night Dadaism.

Kimmel’s gift for comedic gags and running jokes is like late-night’s version of an infectious vocal hook. He’s had prolific use of viral videos (his gloriously tumultuous relationship with Matt Damon and Ben Affleck are probably his best known ones.)

Now that Kimmel is locked-up with ABC until 2017, the battle for late-night supremacy has become a three-pronged melee between Kimmel, that other Jimmy, and Stephen Colbert, who replaces Letterman. It’s official: a new generation of late-night is now at its apex. According to The New York Times, “Mr. Kimmel’s show is up 16 percent in total viewers for this season and 13 percent among the viewers preferred by late-night advertisers, those between the ages of 18 and 49.”

With the announcement that Craig Ferguson is leaving The Late-Late Show (which is really sad), questions regarding the state of late-night have been popping on all over the internet. But Kimmel, Fallon, and Colbert are a tri-force of bright light in the dark of the night.