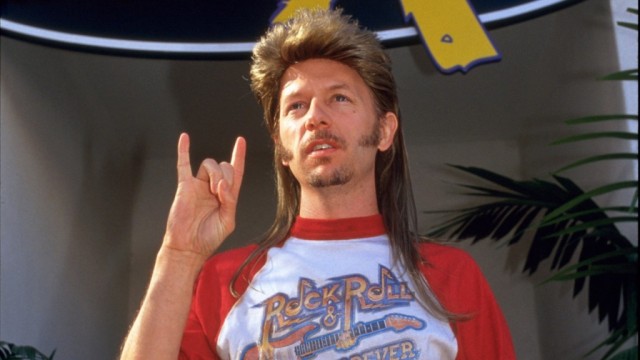 Joe Dirt is making a comeback — and in the unlikeliest of ways. Over a decade after the original film’s release, David Spade is set to reprise his role as the custodian-turned-unlikely hero in a sequel that will air exclusively on the Sony-based streaming service, Crackle, and its associated platforms.

Crackle announced that Joe Dirt 2 is set to start production in Louisiana (the backdrop for the original flick) in November. According to Deadline, the project will be produced via Adam Sandler’s Happy Madison banner. In addition to starring in the film, Spade is co-writing the script along with Fred Wolf, who has signed on to direct. It’s a history making deal, as the movie will mark the first time that a sequel to a major studio film was made for digital release.

The original 2001 adventure comedy was released by Columbia Pictures and followed the story of Joe Dirt, a loser janitor whose surprisingly good attributes are revealed after he goes on the search for his parents who abandoned him as child. The film received negative reviews, but was a moderate success at the box office, grossing over $27 million domestically. Joe Dirt 2 will pick up where the first comedy left off, once again following the wacky adventures of the redneck with the unfortunate mullet.

“I’m beyond stoked that Joe Dirt will finally hit the screens again on Crackle,” Spade said in a press release. “I’ve been sleeping in this wig for years and it will be nice to wear it in the daytime again.”

For Crackle, it also means the chance to back an already known movie and extend it into its own franchise — one that Hollywood may otherwise have passed on. “David Spade had a fresh and unique vision for Joe Dirt 2 that he could have brought anywhere and we couldn’t be happier that he brought it to Crackle for a first-of-its-kind, worldwide release,” Eric Berger, Crackle’s general manager, said. “The original film has been a longtime viewer favorite, ranking among the most viewed in our library, and we decided to produce and distribute the sequel as a feature for fans everywhere.”

The project seems to be part of Crackle’s recent effort to add more original content to its full library of various film and television options. In the past couple of years, the network has produced shows like Jerry Seinfeld’s Comedians in Cars Getting Coffee and the drama Cleaners. Last year, the company also debuted their first original film, Extraction, which starred Danny Glover.

It’s not the only digital platform to begin delving into feature films. After challenging the TV industry with its critically acclaimed original shows, Netflix also now has its eyes on the big screen. The announcement of Joe Dirt 2 comes just days after Sandler and Happy Madison struck their own one-of-a-kind deal, which promised four new movies to air exclusively on the popular streaming service. Prior to Sandler’s groundbreaking agreement, the company had also already announced plans to team up with the Weinstein Co. and release a sequel to martial arts classic Crouching Tiger, Hidden Dragon online and in certain IMAX theaters.

With Crackle now jumping on the bandwagon (and other streaming companies sure to eventually follow its lead), it looks like audiences can expect plenty more made-for-digital films in the future.