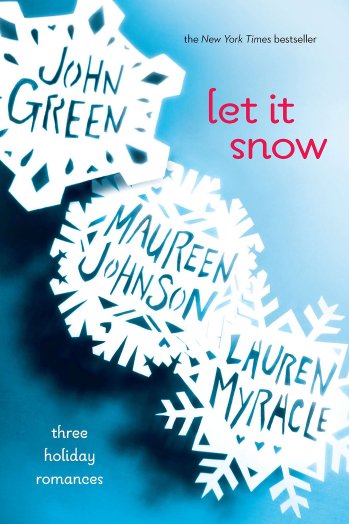 Another John Green film adaptation is officially in the works. According to The Hollywood Reporter, Universal has optioned the film rights to the author’s Let It Snow: Three Holiday Romances, a collection of young adult holiday-themed short stories.

To say Green has been on a winning streak as of late would be a massive understatement. His best-selling novel The Fault in Our Stars was adapted to the big screen earlier this summer to hugely successful results. The movie, starring Shailene Woodley and Ansel Elgort, broke millions of hearts, spurred zillions of tears, and grossed over $300 million worldwide against its small $12 million budget. Another of Green’s widely acclaimed novels, Paper Towns, is already scheduled to hit the big screen next summer.

But it sounds like his latest film adaptation will be very different from his last. In fact, it seems a lot more Love Actually than TFIOS or Paper Towns. For starters, Green only partially authored Let It Snow, co-writing it with Maureen Johnson (Shades of London series and Suite Scarlett) and Lauren Myracle (Thirteen Plus One). While the 2008 book remains within the YA genre, it actually consists of three separate but interrelated stories. Johnson wrote the first story, The Jubilee Express; Green wrote the second, A Cheertastic Christmas Miracle; and Myracle the third, The Patron Saint of Pigs. The tales follow a group of teenagers who live in the same town and experience a huge snowstorm during the Christmas season. In that time, their personal relationships and romances begin to intersect.

All three authors will reportedly be working with Universal on the adaptation. Both Green and Johnson have already expressed excitement over the project on social media. “Very excited that the movie rights to Let It Snow have been optioned. Yay @LaurenMyracle and @maureenjohnson!” Green wrote on Twitter. “PHEW. I have been sitting on this secret for MONTHS,” Johnson added.

Of course, the project is only in the early stages of development, so there are no other specific details just yet. But while the book is certainly different than Green’s other works, it shouldn’t come as a surprise that it was also optioned for film. After the aforementioned TFIOS success, Green is in high demand and studios clearly think his material is a safe bet to become a hit.

Not only that, but his adaptations also seem to be drawing some interest from emerging talent. Woodley was offered the lead role in the TFIOS just as she was on the cusp of a major breakthrough, having left behind The Secret Life of an American Teenager and after nabbing a role in Divergent. By the time the movie actually premiered, her star power had reached an entirely new level. The same can be said for her co-star Elgort, who also played Woodley’s brother in the Divergent movie.

Though Paper Towns is still filling out its cast, the movie recently landed their female lead in popular model-turned-actress Cara Delevingne, who has been slowly transitioning to films and will now be playing the character of Margo. Meanwhile, Nat Wolff, who played the supporting character of Isaac in TFIOS, has long since been signed on for the lead role of Quentin. Paramount also has the rights to Green’s novel Looking For Alaska, but so far, the project only has director Sarah Polley attached.

We’ll have to wait to see which way Let It Snow goes with casting. Either way, if Green keeps up this same kind of momentum, fans can pretty much count on this being just one of many more future adaptations from him.