John Malkovich Takes to the Seas in ‘Crossbones’ 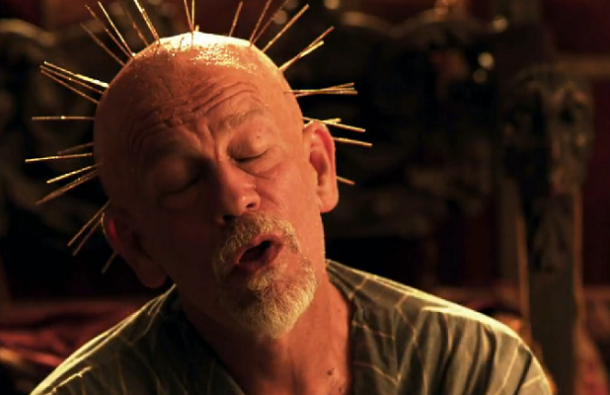 Blackbeard, one of history’s misunderstood pirates, wasn’t a magical murderous monster, as the perpetually brooding Ian McShane would have you believe in that fourth, forgettable Pirates of the Caribbean movie. He was actually a shrewd businessman and only reluctantly killed people, though he himself met a grisly end when Robert Maynard lopped off Blackbeard’s head and hanged it from the bow of a ship, sailing around with the swaying head serving as a warning to the other scourges of the sea.

Crossbones, written by award-winning writer Neil Cross who created the British crime drama Luther, is based on The Republic of Pirates by Colin Woodard, and will have ten episodes. The first is directed by David Slade, who helmed the fantastic finale of Hannibal‘s second season.

Malkovich, one of the finest actors of his generation, is known for his keen, articulate way of speaking and his sharp comedic timing, which he uses to menace and entertain at the same time. In the Line of Fire, for which he was nominated for an Oscar, features Malkovich going against Clint Eastwood in a battle of brains; he played Cyrus the Virus in the Nicolas Cage blockbuster Con Air, and himself in the brilliant Being John Malkovich (the fictional Malkovich was ranked ninetieth on Premiere Magazine’s list of the 100 best film characters).

According to Reuters, Blackbeard “is still alive years later and determined to get his hands on the newly invented longitude chronometer, a device to navigate the seas.” The show will portray Blackbeard trying to establish a sort of outlaw’s society, which doesn’t go over so well with the other, anti-establishment pirates.

The Pirates of the Caribbean film franchise has made the concept of a pirate television show seem a little less exciting (At World’s End remains the most expensive film ever made, at $300 million, even when accounting for inflation). But John Malkovich can make anything interesting, so this show may be worth watching. With Black Sails on Stars and Malkovich as Blackbeard, pirates may be having a moment.