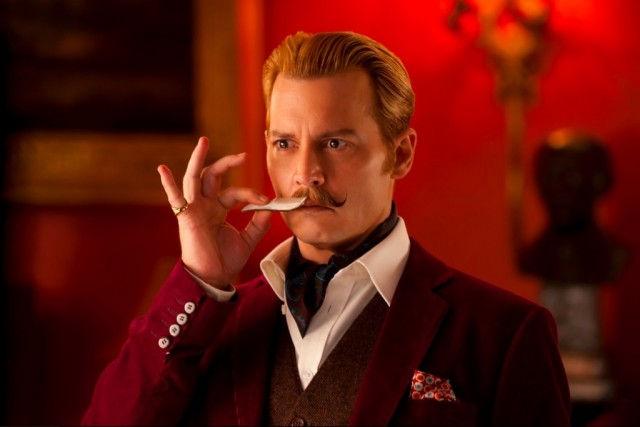 Johnny Depp’s new adventure comedy Mortdecai is getting completely panned by critics and is expected to flop at the box office this weekend, making yet another failure for the formerly renowned actor and causing some to wonder if Depp’s career will ever return to its previous highs.

In the film, adapted from the 1970s anthology of mystery novels by English writer Kyril Bonfiglioli, Depp plays the debonair art dealer with a horrible mustache Charlie Mortdecai. In an effort to stop his leggy wife (played by Gwyneth Paltrow) who gags at the mere sight of his mustache from leaving him, Mortdecai travels around the world seeking a stolen painting that has the code to a secret bank account. Ewan McGregor, Olivia Munn, Jeff Goldblum and Paul Bettany co-star.

As one could pretty much tell from the film’s trailer, this movie is terrible. It currently has a truly pitiful 9% rating on review aggregator Rotten Tomatoes, with critics sharpening their pencils for some very harsh reviews. “It’s hard to think of a way in which the experience of watching the new Johnny Depp film could be any worse, unless you returned home afterwards to discover that Depp himself had popped round while you were out and set fire to your house,” said Robbie Collin for The Telegraph. That review also referred to the film as “psychotically unfunny.”

“Having combed Roget’s Thesaurus in vain for a suitable adjective to describe the Johnny Depp comedy Mortdecai, I’m forced to say it’s just … bad,” said film critic David Edelstein for New York Magazine in a review titled “It’s Great Johnny Depp Seems to Be Having So Much Fun in Mortdecai Because No One Else Will.”

While bad reviews don’t always correlate to poor performance at the box office, this time it seems like they will. Box Office Mojo has predicted that the movie will likely make under $10 million during its opening weekend and make for another box office flop from Depp. The obscure source material as well as waning interest in Depp’s overall schtick were cited as reasons for lack of audience interest in the movie and Box Office Mojo predicted that the controversial American Sniper would rule the box office again this weekend.

Last year Depp’s sci-fi drama Transcendence was considered one of 2014’s biggest flops and even got nominated for some of the bad movie awards the Razzies. The film completely bombed when it was released over the Easter weekend, taking in only $10.8 million during its opening and receiving just a 19% Fresh rating on Rotten Tomatoes. The 2013 Disney epic from Depp’s Pirates of the Caribbean director Gore Verbinski The Lone Ranger didn’t do much better, getting only a 31% rating on Rotten Tomatoes and never even cracking $100 million at the box office, a disappointment for such a big budget project.

Before that, Tim Burton’s adaptation of the 1960s TV show Dark Shadows saw Depp playing a wimpy vampire and got pitiful reviews that questioned what had happened to the once-formidable team of Burton and Depp and failed to break $80 million in ticket sales domestically. The most notable thing to come from the adaptation of Hunter S. Thompson’s The Rum Diary was Depp’s impossibly young and hot new fiancée (Amber Heard) and his collaboration with Angelina Jolie The Tourist was panned as well. It has been a very long time indeed since Depp has given a performance like in Edward Scissorhands, Ed Wood, or even his Academy Award-nominated Captain Jack Sparrow in the first Pirates of the Caribbean.

Depp’s upcoming film, the gangster drama Black Mass, could have the potential to be a quality movie. Depp will play the infamous Irish mob boss Whitey Bulger, who served as an FBI informant on his Italian mafia rivals. In 1994, after being tipped off about his impending indictment, Bulger went into hiding and remained on the loose for 16 years until he was arrested in Santa Monica in 2011, at the age of 61. Depp has had success with gangster material in the past with movies like Donnie Brasco and Public Enemies.

Whether Black Mass will be good enough to save Depp’s ailing career remains to be seen, as he plans to follow it with two bloated franchises — the fifth Pirates of the Caribbean movie and the second Alice in Wonderland installment. Fans of his great early work are certainly hoping that he can revitalize his career soon.