Julius Caesar Will Get ‘Game of Thrones’ Treatment in ‘Emperor’ 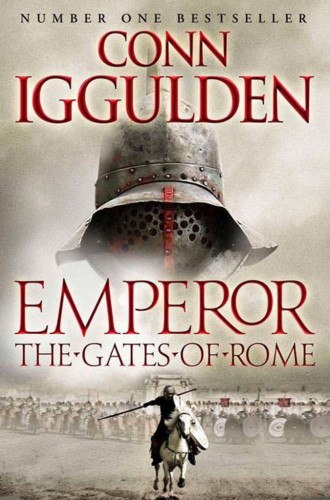 Julius Caesar has been the subject of many films, but audiences are about to see his story in an entirely different light. The Roman emperor will reportedly get the Game of Thrones treatment in Lionsgate’s upcoming movie Emperor, based on the series of novels by Conn Iggulden.

Iggulden’s five-part series chronicle the rise of a young Julius Caesar and his best friend-turned-mortal enemy, Marcus Brutus. The first two novels, The Gates of Rome and The Fields of Swords, delve into the childhood relationship between Caesar and Marcus, with the subsequent installments following their ascent to the top of the Roman Empire. Along the way, the two face political and romantic turmoil that eventually culminates in the deadly encounter on the floor of the Roman Senate. The final novel, The Blood of Gods, centers on Caesar’s adopted son Octavia, who will stop at nothing to seek retribution from the traitors and avenge his father’s death.

According to Deadline, the studio, which has struck gold with YA franchise fare like the Twilight Saga, The Hunger Games and Divergent, has signed on with White Horse Pictures to co-produce Emperor, which will be inspired by the first two books in Iggulden’s series. The movie will reportedly follow Julius and Marcus as they bond at boyhood and then grow into warriors who become politically ambitious and powerful enough to become regarded as threats.

As Deadline reports, the studio sees potential in turning Caesar into its next franchise star. Emperor will be the first of what could eventually be a trilogy of films narrating the rise and death of the historical figure.

From the sounds of it though, this won’t be your average historical fiction flick. The movie, written by William Broyles Jr. (Cast Away and Apollo 13), Stephen Harrigan (Hallmark’s Cleopatra), Burr Steers (Pride, Prejudice And Zombies) and Ian Mackenzie Jeffers (The Grey), will be full of action, sex, and intrigue. In fact, producers Gianni Nunnari and Mark Canton have already compared the project to one of their past collaborations, 300, as well as to HBO’s Game of Thrones.

“Combining the sweep of 300 with the intrigue of Game of Thrones, this is the part of the story of the mighty Julius Caesar that nobody knows – his emergence alongside Brutus as young powerhouses in Rome, a fresh and contemporary retelling of their rivalries, passions and jealousies, captured in a movie with breath-taking action, spectacular visual effects and epic scope,” Canton and Nunnari said, per Deadline.

The project, which has reportedly been in the works for several years, has no director on board just yet. Steers, who co-penned the screenplay, was attached to helm the film back in 2010, but that’s no longer the case. Now that Lionsgate has signed on to co-produce though, the studio will likely waste no time in finding a new director to take on the movie.

“A fresh and inventive coming-of-age story about the young Julius Caesar and Brutus set amidst the drama, intrigue and passions of ancient Rome, we believe that Emperor will be a big, crowd-pleasing motion picture event for global audiences,” Lionsgate Motion Picture Group co-chairs Rob Friedman and Patrick Wachsberger said. “It marks an exciting addition to a slate already loaded with franchises, potential franchises and other star-driven tentpole films.”

Whether Emperor‘s Caesar will prove to be as successful of a franchise star as The Hunger Games‘ Katniss remains to be seen, but promising Game of Thrones-level action is certainly a good way to draw interest. In the meantime, the studio is reportedly making the project a top priority, so audiences can probably expect directorial and casting details sooner rather than later.