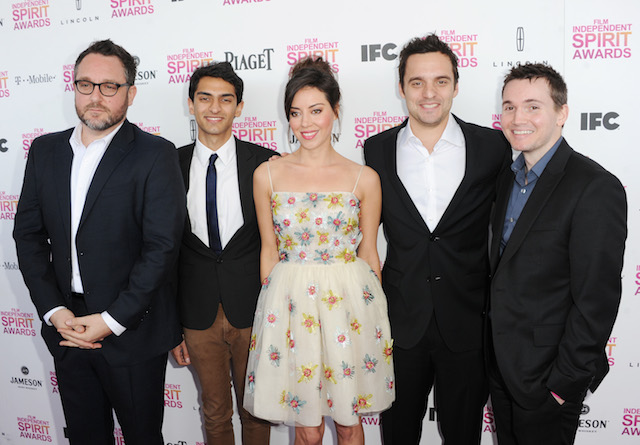 Director Colin Trevorrow hit it big when he landed the job of directing the Jurassic Park reboot, Jurassic World, that’s set to hit theaters this summer. The original dinosaur franchise’s director, Steven Spielberg, is a producer on Jurassic World and worked closely with Trevorrow on reimagining the world he created. The pair liked working together so much that they’re now going to reverse that dynamic, with Spielberg helping Trevorrow reimagine the vaguely fantastic world Trevorrow created in his first film, the indie breakout hit from 2012, Safety Not Guaranteed.

According to The Hollywood Reporter, Trevorrow’s next movie, Intelligent Life, has been picked up by DreamWorks with Spielberg as one of the producers. The movie is being described as a sci-fi thriller that has its roots in an earlier project called The Ambassador, which was intended as a follow-up to Safety Not Guaranteed. The Ambassador was about a United Nations employee charged with representing Earth in the event of contact with extraterrestrials. The U.N. worker ends up falling in love with a mysterious woman who turns out to be an alien. That project, as well as Intelligent Life, was written by Trevorrow with his writing partner, Derek Connolly. Details about the plot of Intelligent Life are being kept under wraps, so it’s uncertain how much it will have in common with The Ambassador.

Safety Not Guaranteed was Trevorrow’s full-length indie debut starring television comedians Aubrey Plaza of Parks and Recreation and Jake Johnson of New Girl. The movie received excellent reviews, with a 91% rating on Rotten Tomatoes and Roger Ebert saying, “Few descriptions of Safety Not Guaranteed will do it justice. It’s a more ambitious and touching movie than seems possible.” The film truly is hard to describe, flirting with a sort of deadpan humor but really being more of a strange blend of fantastic and serious.

Its clout was enough to land Trevorrow the coveted gig of rebooting the Jurassic Park franchise. Trevorrow has learned a lot from working with Spielberg on Jurassic World, which was certainly a tall order for his second film. Trevorrow said that while working on the film, Spielberg provided: “Words of wisdom, every day. He’ll send ideas and he’ll draw out ideas on pads of paper and I’ll shoot them.” The legendary director was obviously a big inspiration to Trevorrow, and it will be interesting to see how Spielberg influenced his style not only on Jurassic World, but also with Trevorrow’s more original Intelligent Life.

Safety Not Guaranteed was lauded for being such a highly creative and original vision. The film evaded genre characterizations, coaxed dramatic performances out of Plaza and Johnson that were a boost to both actors’ careers, and created a believable element of magical realism. With Spielberg’s help (and wallet), making a movie with a similar vision on a bigger budget could take Trevorrow from well-received indie director to big-budget franchise helmer to major awards contender in just three steps.