The first trailer for Jurassic World: Fallen Kingdom has arrived, and it’s shocking fans everywhere. The plot is definitely a bit unexpected, but in addition, there are some key moments in the footage that viewers can’t believe were actually revealed.

However, there’s reason to believe that the trailer’s most surprising development is not what we think. Here’s a look at why the Fallen Kingdom trailer might be a bit misleading — including why the plot is more complex than it appears and how a seemingly dead dinosaur might have survived. Keep reading for details on every action-packed moment and see the full-length trailer on page 5!

The action-packed trailer is full of exciting moments. | Universal Pictures

The trailer for Jurassic World: Fallen Kingdom reveals the plot of the movie, and it’s completely bonkers. Four years after the events of the previous film, Claire Dearing recruits Owen Grady to help her on a mission back to Isla Nublar.

Why? Well, it turns out there’s a volcano on the island that’s about to go off, and Claire wants to go back and save the dinosaurs. As Owen himself observes, “What could go wrong?”

Next: The trailer for the film seems to give away this key moment.

The volcano erupts, leading to death of a key dinosaur

We already get to see a sad and emotional moment. | Universal Pictures

Surprisingly, a full minute of the footage is spent on a sequence in which the volcano blows up and many of the dinosaurs are apparently killed, including the Carnotaurus.

Next: Why a lot of fans were not happy with this

Some fans worried the trailer gave away too much

Did the trailer give away too much? | Universal Pictures

The most common reaction to the Fallen Kingdom trailer was that it spoiled too much. This is a film about the looming threat of a volcano, so why would the trailer show the volcano going off and killing the dinosaurs? Isn’t that the big, climactic moment that would happen in the second half and that should be saved for the film itself?

Plus, the trailer gives away the fact that the T-Rex comes in to save the characters from the Carnotaurus. That would seemingly be a nice surprise in the film. Now, when watching the movie itself, there will not be any suspense when the heroes are being chased down by the Carnotaurus, as we already saw it being killed in the trailer.

Next: Why we might know a lot less about the plot of the movie than we think

But the trailer only reflects the first hour

We’re in store for much more. | Universal Pictures

On Twitter, the movie’s screenwriter, Colin Trevorrow, chimed in to put fans’ fears to rest. He explained that everything that we see in the trailer is actually only from the first 57 minutes of the movie.

So we can stop worrying about the trailer giving away all three acts of the film. The volcano exploding is actually just the incident that sets the last half in motion, similar to the T-Rex escape that takes place halfway through the original Jurassic Park.

But then if the second half of the movie has nothing to do with the volcano, what does it have to do with?

Next: The movie’s official synopsis suggests it’s headed in an unexpected direction.

The plot description released by Universal suggests the movie is actually heading in a totally different direction than initially expected. Fans assumed the thrust of the film would be that Owen and Claire need to save the dinosaurs before the volcano erupts, as also hinted at in the trailer. Therefore, revealing footage of the volcano blowing up and many dinosaurs dying, as seen above, would be a weird decision.

But the official description released by Universal includes this intriguing sentence: “Arriving on the unstable island as lava begins raining down, their expedition uncovers a conspiracy that could return our entire planet to a perilous order not seen since prehistoric times.”

From that description, it sounds like that “conspiracy” will be the real focus of the film, and Fallen Kingdom isn’t as much of a volcano escape movie as we thought.

Next: One death in the trailer may not have been a death at all.

The Carnotaurus could still be alive 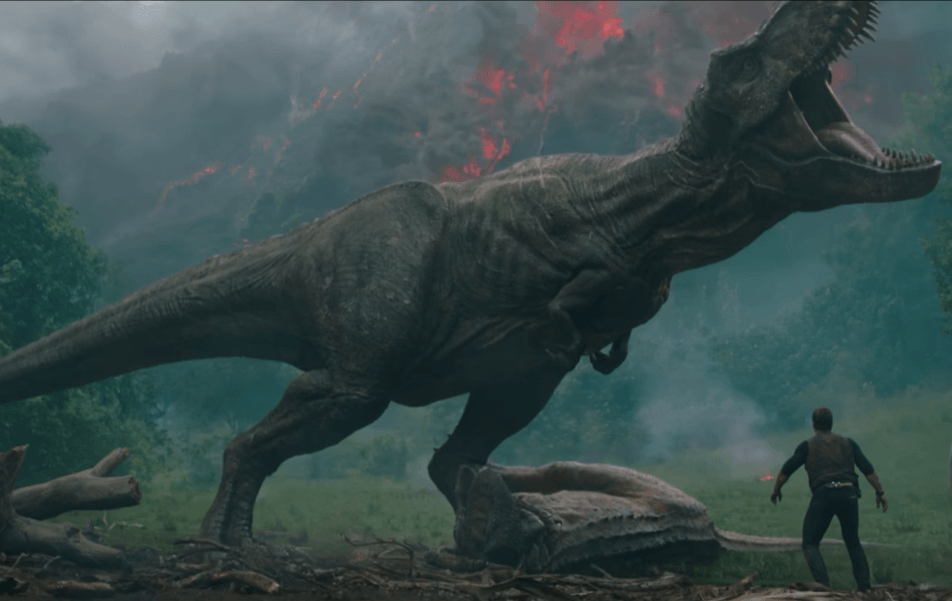 The dinosaur may not be gone for good. | Universal Pictures

None of this explains away the fact that the trailer spoils the death of the Carnotaurus, which is a big thing to give away. But is the Carnataurus really dead?

If you watch closely, you’ll notice that the Carnotaurus does seem to still be alive the last we see it in the trailer, moving around and kicking its legs as the T-Rex roars. It’s possible that the T-Rex does not end up going in for the kill, instead running to escape the volcano, and somehow the Carnotaurus is able to make it out of there alive.

Next: Where the movie is likely going in the second half 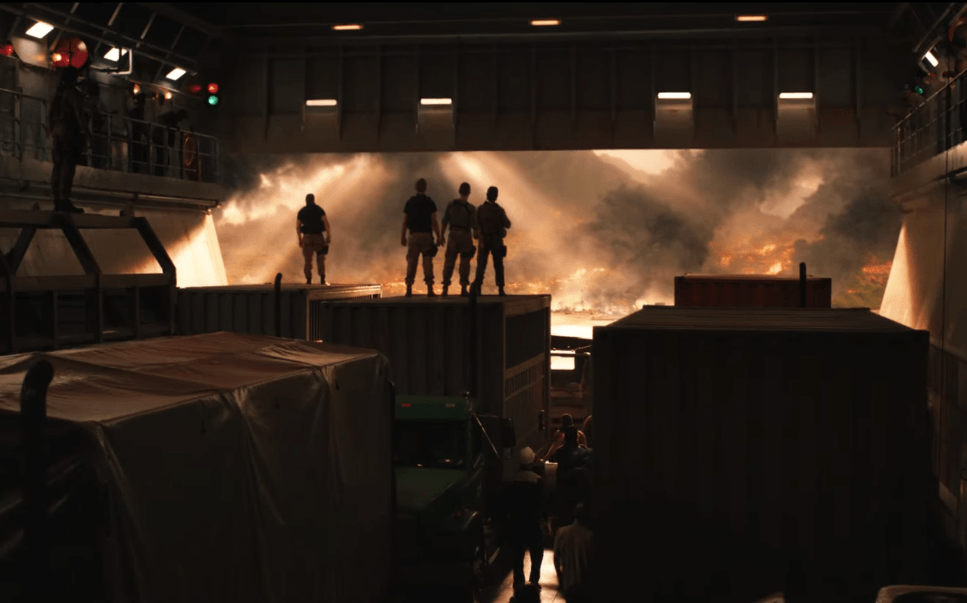 The island is covered in lava. | Universal Pictures

If the volcano going off is in the first half of the movie, then what the heck is the second half? From the trailer, it seems likely that the last hour or so takes place off the island. After all, there’s a shot in the trailer where many of the dinosaurs are contained by the Dinosaur Protection Group as we see the island covered in lava in the foreground.

Trevorrow said that everything in the trailer is from the first 57 minutes, which is a really specific number. Perhaps, then, this shot is exactly 57 minutes into the movie, and it’s at this point that the story goes fully off the island.

Next: Behind-the-scenes footage suggests where the movie will go

The dinosaurs likely escape to the mainland 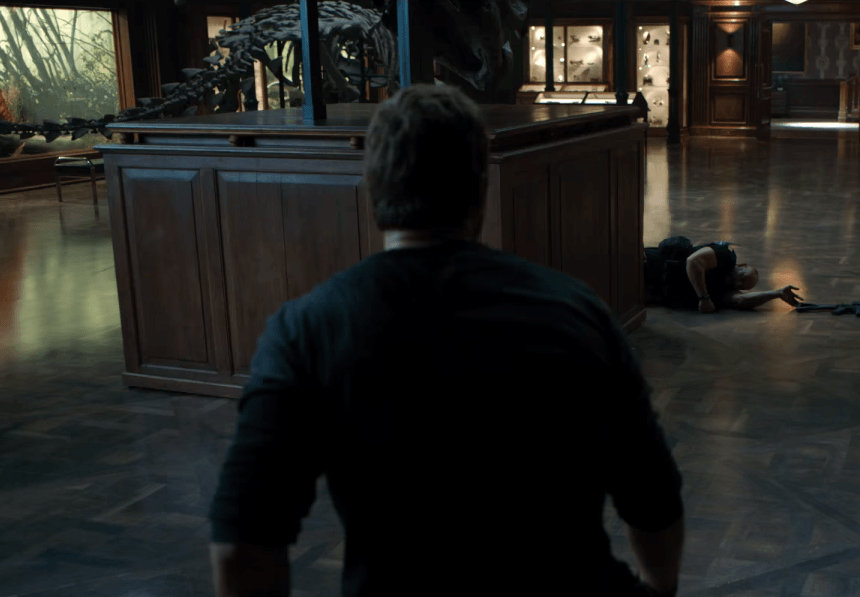 Could this be where things get even more exciting? | Universal Pictures

From there, the second half of the film will likely be about the dinosaurs getting loose on the mainland. We don’t see any of that in this trailer. But we did get a glimpse in another recent behind-the-scenes video.

In that video, we see Owen and Claire trying to survive against a raptor that has escaped in Lockwood Manor, the home of Benjamin Lockwood, John Hammond’s business partner.

So it seems Fallen Kingdom will be an echo of The Lost World: Jurassic Park. That sequel also involved dinosaurs being taken off the island and escaping near the end of the movie.

Next: Another shocking moment in the trailer is also misleading.

The suspense will have you at the edge of your seat. | Universal Pictures

Speaking of shocking moments in the trailer, it ends with Owen disappearing into the volcanic ash. It seems like a safe bet that he survives. But how exactly does Owen get out of there?

Well, this question is answered by that recent behind-the-scenes video. In it, we see the crew filming a scene in which Owen jumps into the water to save Claire, who is submerged in a Gyrosphere.

So the way this scene plays out in the movie will likely be that the Gyrosphere slowly fills with water, making it seem as if our heroes will be able to escape. But Owen, who they thought was dead, will likely reappear just in time to save them.

Next: How Jeff Goldblum’s role in the movie may surprise fans

Jeff Goldblum’s role in the movie is smaller than expected

The one character we noticed isn’t getting a lot of screen time. | Universal Pictures

Finally, one last example of something in the trailer that may play out differently than expected in the movie concerns Jeff Goldblum’s role. He’s a key part of the trailer, speaking in a courtroom and narrating the tail end of the footage. From this, you might assume he’s in a decent chunk of the movie. But that’s actually not the case.

In fact, it looks like what we saw in the trailer might basically be his whole role. Goldblum himself said on a podcast that his role is small — so small that they could cut him out. And the director of Fallen Kingdom, J.A. Bayona, told The Independent that it’s essentially a “cameo.”

So if you were hoping that Ian Malcolm might save the day at the end, don’t get your hopes up.