‘Justice League’: Ezra Miller Reveals How the Movie Will Change the Flash

Justice League heads to theaters Nov. 17, 2017, and DC fans are getting excited. One thing some viewers are especially excited about is Ezra Miller’s portrayal of the Flash. While it’s obvious in the movie’s trailer that Miller is putting his own spin on the character, the actor also recently revealed that fans may notice one thing in particular that’s different about the Flash in Justice League.

Here’s what we know about Miller’s version of the Flash and his role in the movie.

The “Official Heroes” trailer for Justice League debuted and so far has been met with positive reviews from fans. The three-minute, 13-second video opens on Lois Lane (Amy Adams) mourning the death of Superman (Henry Cavill). From there, we see a world filled with chaos. Meanwhile, the Daily Planet headline reads, “World Without Hope,” and shots of an invasion fill the screen.

The trailer ends by featuring the Justice League members one by one: Wonder Woman (Gal Godot), Cyborg (Ray Fisher), Batman (Ben Affleck), Aquaman (Jason Momoa), and The Flash (Ezra Miller). The last shot shows the League together along with the words, “You can’t save the world alone.”

Though Miller is one of the younger cast members, he definitely isn’t a stranger to the screen. His first feature film was the indie Afterschool in 2008. Prior to that, he appeared in TV shows, Californication, Law & Order: Special Victims Unit, and later Royal Pains.

But he’s probably best known for his roles in We Need to Talk About Kevin, The Perks of Being a Wallflower, and The Stanford Prison Experiment. Devout Miller fans are excited to see him as an eager Flash and even more excited to see what he does with the Flash in the character’s solo movie, reportedly titled Flashpoint and scheduled for release in 2018.

3. The cast comes from a variety of backgrounds

As Screen Rant notes, the cast comes from a variety of backgrounds. Writer Dusty Stowe states:

Running the gamut from Ray Fisher, a virtual unknown, to Ben Affleck, one of Hollywood’s biggest stars for two decades. With the exception of Affleck, the cast consists of actors who, while all from very different backgrounds and at different points in their careers, are just now on the cusp of becoming certified movie stars.

4. But they have great chemistry

Though the cast is all at various stages in their careers, Miller told Geek Magazine that they get along swimmingly.

“I love this gang of weirdos. We’re all very different humans and we really love each other through and through. I personally always feel that the goodness of what we create interpersonally on a set flows into the quantum fabric of the film,” says Miller.

If the trailer is any indication of the cast’s chemistry, it should be very exciting to see the work of this particular group of actors come together on the big screen.

5. One thing will be missing from the Flash’s suit 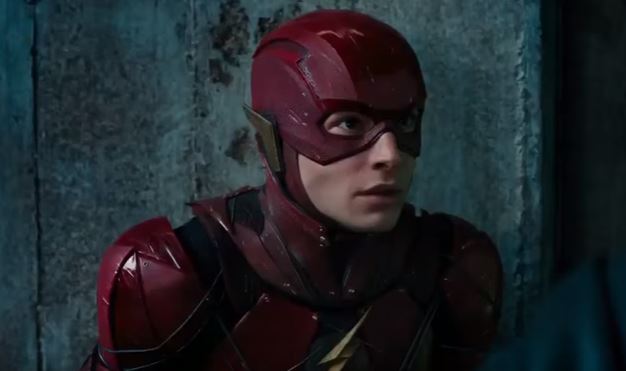 Miller revealed an interesting fact about his suit. | Warner Bros.

In a recent interview with Entertainment Weekly, Miller let slip that there’s a little something different about the Flash in the upcoming Justice League.

“I can confirm, spoiler alert, his suit does not pop out of his ring [in the movie]. Things have to progress, you know? Original Barry Allen was clearly an incredibly, incredibly clever scientist. We acknowledge and respect that,” he tells EW.

Passionate Flash fans will know that the character’s costume is supposed to pop out of a ring, allowing Barry Allen to don it when he needs it. With the push of a button, the ring releases “the chemically treated costume to its full size.”

6. Miller apologized to diehard fans for the change

After revealing the news that the Flash’s costume would not be popping out of Barry Allen’s ring, Miller apologized to diehard fans.

“We want to apologize to the fans who are mad about the ring thing,” he said playfully. He also jokingly added, “I know the ring is the coolest thing about the DC universe. It was a little hard for us to sell in this version of this universe right now. Bear with us! There’s gonna be other cool things.”

7. Flashpoint is on the horizon

Check out the new trailer and see #JusticeLeague in theaters November 17.

For fans who are extremely excited to see more of Miller as the Flash in Justice League, you’ll have to wait until next year to get an even bigger dose of him in Flashpoint.

In his interview with EW, he hinted that his character’s role in the DC universe is set to expand with the upcoming solo film, which will dig further into the Flash’s mythology.