Kanye Meets Trump: Why This Is No Laughing Matter

Kanye has recently been the focus of the media due to his rants onstage. Shortly after, he went through a nine day hospitalization for temporary psychosis from sleep and water deprivation. Not long after that, he was released and many were shocked to see that he went to the Trump Tower on December 14 to talk to the President-elect himself. What could the two have possibly talked about?

Well, the rapper answered that question himself on Twitter. He tweeted, “I wanted to meet with Trump today to discuss multicultural issues. These issues included bullying, supporting teachers, modernizing curriculums, and violence in Chicago.”

But what exactly could the rapper say to the President-elect to better “multi-cultural” issues? Who else will Trump consult to get a clear understanding of those very real issues? It’s hard to take this meeting as anything other than a publicity stunt that didn’t go over well. There were criticisms from Kanye’s fan base after this, but of course, there were also jokes and memes being shared.

#Kanye meets #Trump
Kanye “I want to meet the President”
Inner Kanye “I am the President!”
Rumor has it Swaggy P for Vice President pic.twitter.com/miw0s5GiaO

When I heard #Kanye met with #DonaldTrump today…. pic.twitter.com/2gr5EDhAqo

Bruuuh the internet is fast, petty and amazing at the same time! 😂😂😂 Memes are the best thing the net has given us. 💀 #Kanye #Trump pic.twitter.com/XPzqTQRDfk

Although it’s probably natural to laugh at the unexpected and the outrageous, we have to realize that this is no laughing matter. After all, the unexpected has already happened and we are starting to see the troubling consequences.

This year has been a strange one given the entire election. Donald Trump ran for office and at the beginning many didn’t really take him seriously. He had no political experience and he began saying the most controversial statements, so many thought he was doing it for the publicity rather than trying to actually be president. However, he is now our president-elect, proving that someone with no experience can win. The once reality show star who had catch phrases like “You’re fired!” is now no laughing matter.

Kanye West is similar to Donald Trump in many ways. He has also been the butt of many jokes in pop culture due to his outlandish quotes in interviews which includes calling himself more influential than Stanley Kubrick, Picasso Escobar, Steve Jobs, and more. He also publicly ridiculed a sitting President, then later announced that he is going to run for President in 2020.

Of course the reaction to that announcement sent social media and everyone into a frenzy. There were memes, jokes, and the hashtag #Kanye2020 was trending. Many wondered if he was actually serious? The same question many wondered about Trump up until he actually won the election.

This shows that the public has a tendency to underestimate several things. The first is that these two people certainly have the egos that would lead them to believe that they could run the country with zero experience. Secondly, that money can go a long way in politics … farther than concrete plans or experience. Thirdly, that many people will vote for a celebrity for the sake of voting for a celebrity. We saw this from voters who claimed that a Trump presidency would be a nice change because he’s not a politician, as if experience for a job is something to criticize. Lastly, racism is just not a deal breaker to many privileged people in America.

At first it seemed like Kanye would be one of the more outspoken celebrities when it comes to racism. On live television back in 2005 the rapper said, “George Bush doesn’t care about black people” due to the mishandling of Hurricane Katrina. But somewhere along the way it looks like the rich rapper has lost that connection to race relations in America, just like many other successful celebrities. 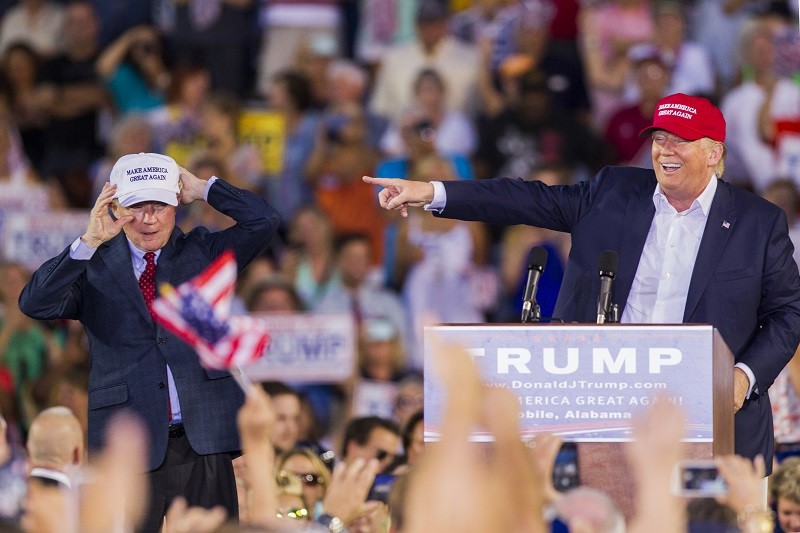 Back in November, Kanye once again decided to stop in the middle of his concert in San Jose to talk. “Before I get out of here I want to talk about race and the idea of racism in America and the world,” he said according to CNN. “Specifically to black people, stop focusing on racism. This world is racist, OK? Let’s stop being distracted to focus on that as much. It’s a f***ing fact. We are in a racist country.” The trouble with that statement is that many know that not talking about racism doesn’t just simply make the problem go away.

In addition to Kanye and the President-elect’s similarities, it seems like the rapper is such a huge supporter of the new politician that he has pushed back his plans to run for president. He did this by tweeting “#2024” rather than 2020. So essentially not only are these two celebrities probably going to try to work together over the next four years, but Trump may try to run again and Kanye might help him. After all, during the election, Trump alarmed many minorities with his racist generalizations that were publicly supported by the Klu Klux Klan. But having a prominent celebrity of color supporting him, might help Trump not only with minorities, but with young people. That is if Kanye’s fan base don’t completely turn on him by the next election cycle.

If you weren’t already alarmed that Trump won the election with such a weak platform, then you should be alarmed now. We are no longer in the early naive days of the recent election where we think we can afford to laugh at an outrageous candidate. Now we have to be vigilant and take every person who says they want to run for office seriously by looking closely at what they stand for and what it could mean for our country.