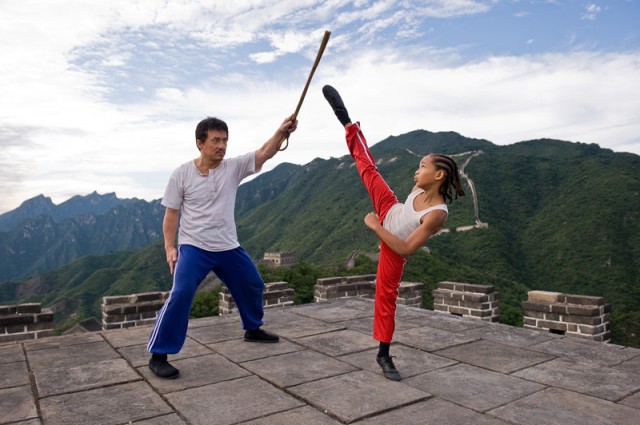 It’s the 30-year anniversary of the release of the 1984 film The Karate Kid, and the franchise is still going strong. The sequel to 2010’s reboot of The Karate Kid has just added a few new writers, and they’re up-and-comers as fresh as the karate kid himself.

It only took a few days for Sony to green-light a sequel, and four years after the success of the first film, which starred Jackie Chan and Jaden Smith, Jeremiah Friedman and Nick Palmer will tackle the script for The Karate Kid 2.

Palmer and Friedman’s previous work has primarily been on short films, and neither has a produced feature-film script. But according to The Hollywood Reporter, the two “are known for their action comedy scripts.” Their action-comedy spec script Family Getaway was included on the 2010 Black List, and, according to Cinema Blend, it led to the team being picked to remake the romance The Bodyguard. Palmer and Friedman also sold an action pitch called Speeding Bullet to Universal.

Their work will be tacked on to the successful, action-packed background of the film’s other writers. The script has also been worked on by Zak Penn and the writing team of Ethan Reiff and Cyrus Voris. Penn wrote 2008′s The Incredible Hulk as well as the story for record-breaking Marvel blockbuster The Avengers. Among his other credits are X-Men 2, X-Men: The Last Stand, and the TV series Alphas. Reiff and Voris were responsible for Bulletproof Monk, the 2010 Russell Crowe-starring Robin Hood, and the popular animated kid’s movie Kung Fu Panda. They also created the television shows Brimstone and Sleeper Cell.

Both Chan and Smith are confirmed to return for the sequel, and in April, Breck Eisner was named to direct but has since left the project. According to The Hollywood Reporter, his departure was due to scheduling conflicts.

Whoever does direct will be taking the place of Harald Zwart, who directed 2010’s The Karate Kid. The first reboot film was a box office success with a worldwide total of $359 million, according to Box Office Mojo, being made on a budget of $40 million. It received middling-to-positive reviews, with a certified fresh film rating of 66 percent on Rotten Tomatoes. There is no further information on the timeline for The Karate Kid 2, but based on this first film’s performance, there’s an audience waiting for it.