Killer Robots: 7 Movies That Made Us Afraid of Drones

Drones are one of those futuristic technologies that are ripe for fascination and fictionalization in film. Unmanned aircraft represent the blurry line between between the good and evil of new technology, as they can save us time and money while also having the capacity to bring surveillance and violence to society in terrifying new ways. As Amazon promises that soon its packages will be delivered via friendly drones from the sky that drop presents on our front lawns, drones are most commonly thought about for their ability to administer violence. Drones can allow unknown forces to kill and destroy from far away. Drones can also be fitted with cameras to watch people, flying far above or even peeping through your window to keep an eye on you when you don’t even know it. The idea of unmanned drones that weren’t even designed for malicious purposes malfunctioning and running into airplanes, buildings, or anything else is also a frightening prospect that current litigation over drone technology is wrangling over right now. Here’s a look at six films that feature drones and the different ways the technology has been portrayed in Hollywood movies. 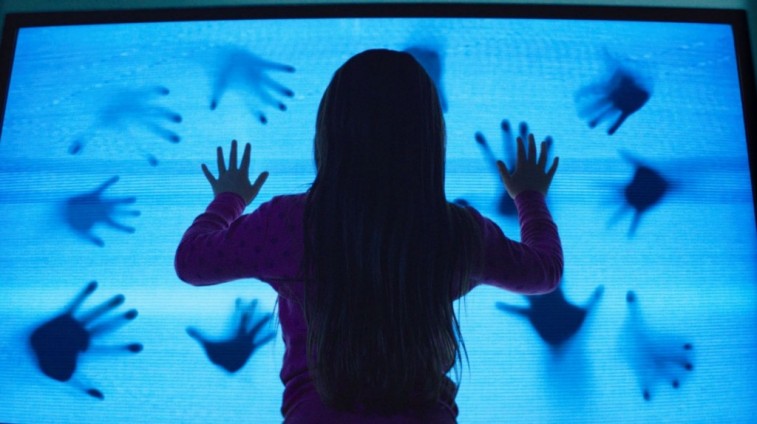 The 2015 remake of the 1982 horror classic is one of the more benign examples of drones on this list, and kind of refutes my title. Rather than a government-created weapon, this drone is a toy purchased for the young son of a couple who has just moved in to a new house in suburbia. As in the original movie, all the technology in the new house starts going haywire as the family begins to notice that something there just isn’t quite right. When the youngest daughter Madison is sucked into a paranormal portal in her closet, the experts that come to save her utilize the toy drone, some rope, and a smartphone to try and save her from the other side. The spirits in the house aren’t willing to let her go that easily, but this is the only example on the list of a drone being used for “good.” It was also kind of a lame attempt to “modernize” the old Poltergeist by throwing in some nice new technology. No mention of why the family bought their kid a toy drone (or a big, new house in the suburbs) when they’re both newly unemployed. 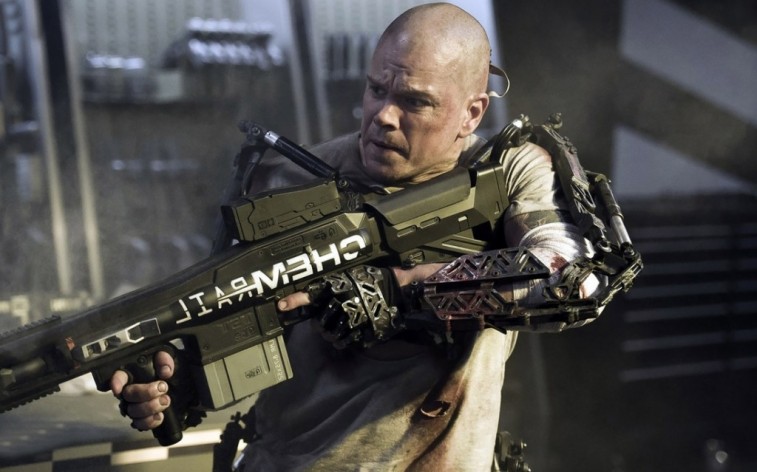 Neill Blomkamp’s second movie is set in a futuristic dystopia version of Earth, and what future dystopia Earth would be complete without killer drones? Matt Damon is the protagonist, a man who is among the cursed majority living on a filthy, impoverished, disease-ridden version of our planet while the lucky wealthy few get to live up above on a fancy space station called Elysium. Their world is run by a computer system that dictates everything to perfection and they even have medical pods that can cure any disease as well as regenerate tissue. Of course the people on Elysium and the people on Earth hate each other. There’s a lot of unsettling futuristic technology with lots of moral gray area used in this movie, like a medical pod that can cure any ailment, so it makes sense that Blomkamp would add in drones as well. At one point a sleeper agent from Elysium uses drones to track down and attack Matt Damon’s character. In the second Captain America movie, super-powered drones called Helicarriers created by weapons genius Tony Stark for S.H.I.E.L.D. The terrorist organization Hydra hijacks the Helicarriers under the guise of S.H.I.E.L.D. and plans to use them to kill its enemies. The drones have guns the size of battleships and other insane weapons features the likes of which are only seen in Marvel movies — at least for now. When S.H.I.E.L.D. figures out what’s going on, Captain America, Falcon, and Maria Hill destroy the Helicarriers by making them fire at each other. The film’s directors the Russo brothers wanted to make a superhero movie within the format of a timely political thriller, thus the reason for including a theme like drone strikes that people are currently anxious about. The inclusion of drones in this Marvel movie was not accidental, or just a reason to show off the crazy toys Tony Stark makes, but a way of exposing some of the political and social fears that we’re feeling right now. This tactic worked out well for the movie, which got raves from critics and an 89% rating from reviews aggregated by Rotten Tomatoes which called it “suspenseful and politically astute.” 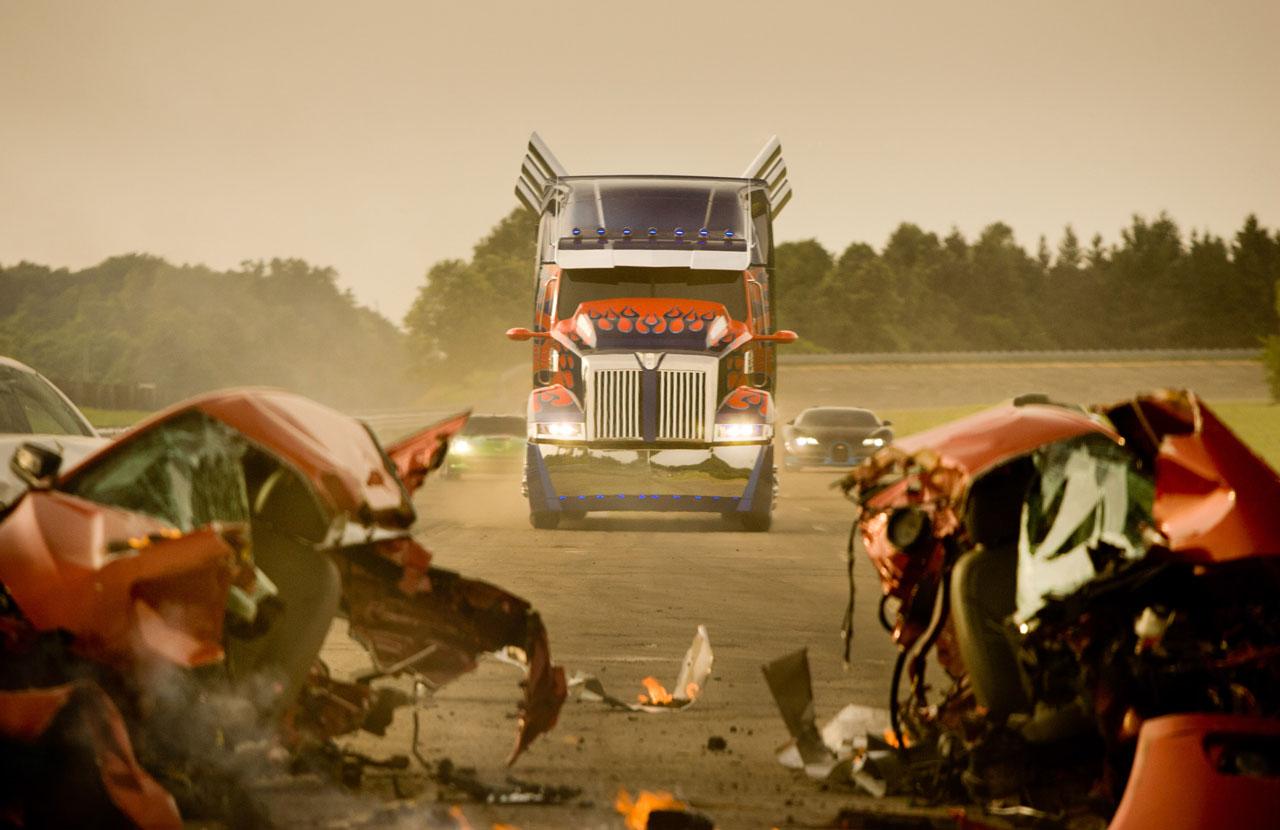 In perhaps the funniest and most obvious example of how thoroughly drones have infiltrated popular culture, tiny little drones were amongst a group of villains featured in the latest Transformers movie. Like all Transformers movies, Age of Extinction did incredibly at the box office, terribly amongst critics, and tried to target as wide a demographic of people as possible from children to adults. There is little to no plot in this movie, it’s mostly just a series of explosions and robots with an occasional shot of an actor running or shouting, but this is what people want in a Michael Bay film. Even little kids who want to watch smart-talking robots blow things up are learning from Hollywood that drones are evil.

Shortly after Captain America: The Winter Soldier came out last year, another comic book superhero movie debuted that also got great reviews and also criticized the use of drones in warfare. In X-Men: Days of Future Past, the main plot sees the X-Men going back in time to stop a military program using artificially intelligent drone killers called Sentinels that were created to find and murder mutants in a dysoptic vision of 2023. Mutants are believed to be big enough threats to homeland security that the innocent people who are often taken down in these strikes are seen as a necessary loss to protect everyone else. Thus they must travel back in time to 1973, when the Sentinel program was created, to stop it before it ever gets started. The commentary on how we lose our humanity by using unmanned machines to do our killing and disregarding the innocent people that die in doing so is pertinent regarding drone strikes in the Middle East. Those parallels aren’t there on accident. Last year’s RoboCop remake was completely about drones. The movie begins with a scene in which an American police robot and some unmanned drones kill an innocent child during a suicide bomb scare in the Middle East, and goes on to point out the irony of creating a machine that can kill us without conscience. You almost can’t make a futuristic political thriller, or almost any kind of movie with an uneasy view of the future, without throwing a few drones in the mix. This movie also points out through its fictional company OmniCorp that there are people making billions on the drone technology that’s killing for the military overseas. The company wants to bring that technology back to the States for further profit, and see the opportunity to do so in aiding an injured cop by turning him part man, part robot. 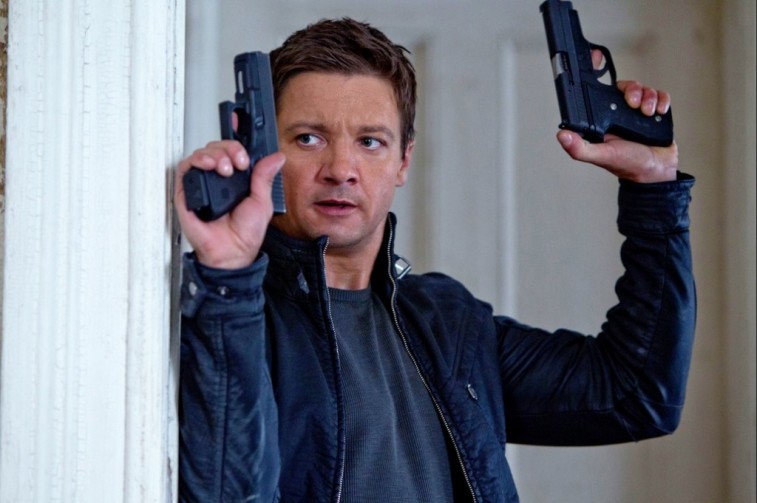 The fourth film in the Bourne franchise follows a different hero, played by Jeremy Renner, who is targeted by a drone strike at one point in the movie. At the beginning of the movie this new character, a super spy named Aaron Cross, is abandoned in the cold Alaskan tundra when a bunch of enemies a world away try and kill him with robots while sitting at their computers. Of course Cross’s skills — including super strength, speed, stamina, and smarts all derived from a cocktail of steroids cooked up by CIA-employed scientists — help him defeat those drones. But even a moment that brought up all the complicated questions related to drone warfare, including the possibility that someday they could be used on American citizens, wasn’t enough to grant the movie great reviews. “Or you could say Cross is a drone in human form, efficient but impersonal, like this redundant Legacy,” said Time.