Keeping Up with the Kardashians star and beauty mogul Kylie Jenner shocked the world when she gave birth to her baby girl, Stormi Webster at just 20-years-old. The youngest of the Kardashian/Jenner clan was living the life as a reality starlet. Therefore, most people were puzzled when she decided she wanted to have a child at a pretty young age. However, Jenner expressed in her “To Our Daughter” video where she shared snippets from her pregnancy and Stormi’s birth, that she always wanted to be a mother. While many people are deciding to have children later in life, especially celebrities who have hectic schedules, some stars had their children before they turned 25, and they’ve kept it pushing.

Check out Kylie Jenner and 14 other celebrity moms who joined the motherhood club before they turned 25.

Kylie Cosmetics mogul Kylie Jenner gave birth to her baby girl Stormi Webster on Feb. 1, 2018. She was just 20 and Stormi’s father; rapper Travis Scott was only 25 at the time. In Vogue Australia, Jenner discussed motherhood. She said, “I don’t think my life has changed since becoming a mum: I think the way I look at life has changed since becoming a mum. I think more of the future. I used to live each day as it came, and now I look at the future more. I actually feel like I love myself more after I had Stormi. And I’m trying to be…I mean, I’m already a positive person, but just having fun, being positive.”

Next: An actress who has never let life slow her down.

We all know the sultry and bubbly Sofia Vergara from her role on Modern Family. However, before she got her big break in Hollywood, the Head & Shoulders spokeswoman married her high school sweetheart, Joe Gonzalez. At just 19, Vergara who is now married to actor Joe Manganiello gave birth to her only child, a son Manolo Gonzalez-Ripoll Vergara. Though her marriage to Gonzalez did not last, the couple divorced in 1993, a year after Manolo was born, Vergara has no regrets about being a single mom.  She told Redbook, “When I had Manolo, I was 19, and I had the energy for everything.”

Next: A “Big Little Lies” actress who looks exactly like her daughter.

Though we might love her as Elle Woods in Legally Blonde and as the high strung Madeline Martha McKenzie on HBO’s Big Little Lies, Reese Witherspoon has been a mom almost as long as she’s been a Hollywood A-lister. In 1999, Witherspoon starred in Cruel Intentions with actor Ryan Phillipe she was just 20 years old at the time and the pair fell hard for one another. That same year, she and Phillipe tied the knot and welcomed their first child, a daughter named Ava Phillipe. Their second child, a son named Deacon Reese Phillippe, was born in 2003.

For Witherspoon having a child at 22 was rough. She told Elle, “It was so hard … living [away from my family]. I really didn’t have any friends. And I had a baby. No one else who was 22 had a baby.” Witherspoon and Phillippe’s marriage ended in 2006, but the Wild actress married talent agent Tim Roth and had a third child, a son named Tennessee James Toth in 2013.

Next: A songstress who has one son, two nieces and one nephew.

Songstress Solange Knowles who just happens to be Beyoncé’s little sister, was just 17-years-old when she married her first husband, Daniel Smith in 2004. At 18, she gave birth to her only child, a son named, Daniel Julez J. Smith. The A Seat At the Table singer has been very candid about the blessings of motherhood.

She spoke about the love that she has for Julez. She said, “I have been so blessed that my son is the coolest kid ever. Of course, that first year of not sleeping and just being dedicated to him had tough parts. I’ve heard stories of people who were 14 that had kids and basically snapped into it and got into the groove of motherhood. A lot of people have doubts, but when you have a child I think it takes a really non-emotional person not to have a blast, no matter what age.”

Next: A young actress who had to give up her career when she got pregnant at 16.

People were scandalized in 2007 when Nickelodeon’s Zoey 101 star Jamie Lynn Spears announced she was expecting a baby with her 18-year-old boyfriend, Casey Aldridge. She was just 16 at the time. Unfortunately, the starlet who is also the younger sister of pop-sensation Britney Spears was shunned and booted from her show. Spears gave birth to her daughter, Maddie Briann Aldridge in June 2008.

Though things didn’t work out between Spears and Alderige, she is now happily married to businessman Jamie Watson and gave birth to a second daughter, Ivey Joan Watson in April 2018.  Announcing her pregnancy was tough for Spears so when Teen Mom premiered on MTV in 2009, she recalled being thrilled to find some solidarity. She told Glamour, “I remember thinking, Oh my God, I cannot wait to see this show because there’s someone else out there. I mean, I feel for those girls. I’ve been that girl. It does show that motherhood is hard.”

Next: The older Spears.

Before getting pregnant, she wrote on her website about her desire to be a mom. She said, “I’ve had a career since I was 16, have traveled around the world and back and even kissed Madonna! The only thing I haven’t done so far is experience the closest thing to God, and that’s having a baby. I can’t wait!”

Next: A late legend with four sons.

Many people know that the late-legendary Aretha Franklin was a mother to four sons. However, many people don’t know that she had he first two sons, Clarence and Edward when she was just 12 and 14 respectively. Clarence was born on January 28, 1955, and named after the “Think” songstress’ father.

Her second son, Edward was named after his father, Edward Jordan. As Franklin’s career began to take off, her sons were raised by her grandmother Rachel and sister Erma. Franklin did not like to discuss her early pregnancies during interviews.

Next: An actress who never really thought of herself as a young mom.

Kate Hudson is currently expecting her third child, a girl with her beau Danny Fujikawa. However, she had her first child, her eldest son Ryder Robinson, four years into her marriage to her ex-husband, Black Crowes frontman Chris Robinson. The Almost Famous star said at 24, she didn’t really think she was a young mom. Then, Ryder started growing up.

Next: A singer/actress who kept her daughter out of the spotlight.

After being in the spotlight nearly her entire life with her series Moesha, an iconic singing career, and a slew of films, Brandy took a step back at 23 when she gave birth to her only child, a daughter named Sy’rai Iman Smith, with her then-boyfriend, Robert Smith. Though she showcased her pregnancy and birth on the short-lived reality show, Brandy: Special Delivery. Sy’rai was kept out of the spotlight until her teen years when she was old enough to have her own social media accounts.

When Sy’rai was much younger, the “I Wanna Be Down” songstress told People that she kept her daughter away from Hollywood to protect her privacy. However, she said, “[I] would love for people to see how I’m doing it because I think I could be a good example of a young, single mom.”

Next: A Disney Channel star who wanted to have her kids spread out.

Lizzie McGuire star Hilary Duff was just 24-years-old when she welcomed her first child, a son named Luca Cruz Comrie with her then-husband, Mike Comrie. Now, the Younger star is expecting her second child, a girl, with her musician beau,  Matthew Koma.  When Duff had Luca she said that being a young mom made her eager to have more children in the future.

She told Parents Magazine, “I want to have more kids and I’m looking forward to doing that, but I’m not in any rush. I think sometimes maybe if you start a little later you’re in a hurry to get all the kids you want, and I have a little time to spread that out.” Now that Luca is grade school age, we’re sure he’ll be eager to help with his little sister.

Next: This actress/comedian who had one daughter as a teen.

Whoopi Goldberg was 30 years old when she got her massive Hollywood break in the Steven Spielberg film adaptation of Alice Walker’s The Color Purple. By then, she had already been a mom for 11 years. Goldberg married he first husband Alvin Martin in 1973 when she was just 18 and gave birth to a daughter, producer/actress, Alexandra Martin, the same year.

Through Martin, Goldberg has three grandchildren and one great-grandchild.

Next: A songstress who is super protective of her son.

British songstress Adele skyrocketed to fame with her stunning vocals about love and loss on he debut album 19. Her fame and celebrity only evolved after the release of 2011’s 21. Therefore fans were shocked when a year later in 2012, Adele announced she was expecting a baby with her partner Simon Konecki.

Adele gave birth to her son, Angelo James Konecki in Oct. 2012, and she hasn’t looked back. Though Adele has released a third studio album, 2016’s 25 her primary focus has been being a mom and protecting her son from the spotlight. At the time, she told People that she wanted three sons by the time she was 30.

Next: A supermodel with a pint-size model son.

If you follow supermodel Jourdan Dunn on social media, we’re sure you’ve spotted her adorable son Riley. The Victoria Secret model gave birth at 19 having worked until she was six months pregnant and she returned to the runway just ten weeks later. Dunn told Fashion Magazine that begin a young mom as terrifying at first. She revealed, “I asked myself “Can I be responsible for another human being? Like, what the hell!” I was lucky I had my mum to guide me, but at the same time she let me learn to trust my own instincts.”

These days King Riley is slaying in his own modeling campaigns.

Next: A actress who is super close with her children. 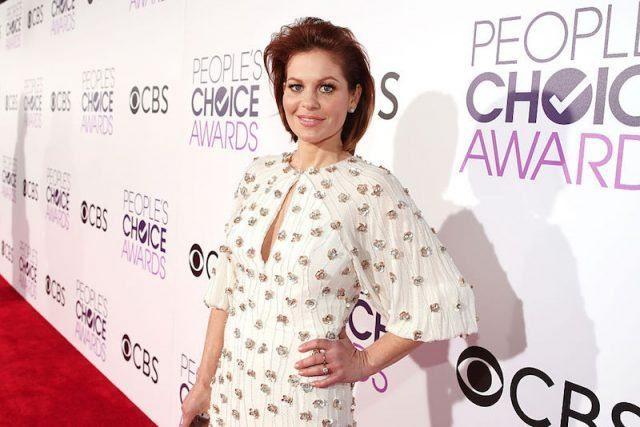 Candace Cameron Bure wed NHL hockey player Valeri Bure when she was just 20. When she was 22, she gave birth to her first child, Natasha Bure. The Fuller House actress is also the mother of two sons, Maksim and Lev Valerievich. She told Cookie Magazine, “I love being a young mom and taking my kids everywhere with me. I’m blessed to say my kids have traveled all over the world, and we’ve never brought someone along to help with them. It puts my obsession with etiquette books to good use! I also get to see the world through young eyes and do things I might not otherwise because of it.”

Next: A fashion mogul who adores her family. The year former Spice Girl and fashion mogul Victoria Beckham married soccer sensation David Beckham, the woman formally known as Posh Spice gave birth to her first child, Brooklyn Beckham. Neither Beckham nor her husband has let having a young family stop them from soaring. They’ve even added to their family with two more sons Romeo James and Cruz David, and a daughter named, Harper Seven.

In 2016 the mother of four told The Sunday Times Style, “I think that the kids get harder as they get older. The most important thing is to make sure that each child gets the individual attention that they need. I can never go to bed early because Brooklyn is always up and that’s when I see him, and then you’ve got Harper who is up super early. So I do feel that I’m being pulled in four different directions with the children.”

Read more: Kylie Jenner: Is Boyfriend Travis Scott Stepping Up as a Dad?