‘Star Wars: The Last Jedi’: How an International Trailer May Have Tipped Disney’s Hand

With the latest trailer for Star Wars: The Last Jedi, we were left with plenty of ideas to speculate about. While Luke Skywalker’s intentions in the film and the parental origin of Rey continue to be a mystery, we may have just gotten a little more clarity on one major subject in question. Who, exactly, was Snoke talking to at the beginning of the trailer?

Thanks to the international trailer and some less-than-sneaky subtitles, one Reddit user has brought us one step closer to true enlightenment. We took a look at all of that, plus every other new piece of news that we’ve learned recently about The Last Jedi.

Fans are super excited about Snoke’s role in the film. | Lucasfilm

The recent trailer for The Last Jedi provided us with our first true look at Supreme Leader Snoke. Toward the end of the trailer, we can see his pink-colored skin and gold robe. He is holding out his hand toward Rey, who is under some sort of control in that moment. Other than this, and the lines we hear from him in the trailer, not much is revealed about his true nature.

But one theory about Snoke comes from YouTube channel Star Wars Theory, who claims to have been clued in on a major spoiler about the leader of the First Order’s identity. Snoke is an ancient Sith that has been entombed, somehow, but awakened with the death of all the Jedi during Order 66. He feeds off the essence of other Force users to help his physical body regenerate. There is actually some evidence from images that Snoke in The Last Jedi is somewhat less damaged then how we saw him in Star Wars: The Force Awakens, so this theory has some merit.

So that leaves us to wonder what, exactly, Snoke might want with Rey? And what could he be doing to her in that scene from the trailer?

Will Kylo Ren kill his mother?

All eyes are on Kylo Ren. | Giphy

Another key scene from the trailer involved Kylo Ren in his TIE defender, flying through space and destroying Resistance ships with ease. But there is a moment where Ren, who killed Han Solo — his own father — at the end of The Force Awakens, hesitates to bring himself to blow up his mother’s ship. Will Kylo Ren be responsible for the death of Leia Organa in The Last Jedi?

We have our doubts, to be honest. Why would the trailer tease this moment and show him pause, only to have him actually kill her — and with her, one of the most iconic characters in movie history? If that’s the route they were going, you would think they wouldn’t tease it in the trailer. Also, Mark Hamill also has eluded to the idea that Leia’s storyline will be concluded in Episode IX, not The Last Jedi (due to actress Carrie Fisher’s untimely death in January 2017).

Our best guess is that Kylo can’t bring himself to kill his mother and that Leia survives the end of the movie.

He won’t appear in the film, but his voice will! | Giphy

The Last Jedi isn’t the only way that Disney is going to be bringing us more Darth Vader in the near future. Rumor has it, Vader will make an appearance in Solo: A Star Wars Story, set to release in May 2018. But back to The Last Jedi, there will be plenty of references to the long-dead Dark Lord of the Sith throughout the film.

That reportedly includes a cameo by Hayden Christensen as Anakin Skywalker. Although it has yet to be confirmed, sources indicate that Christensen went to Pinewood Studios in the UK to record a handful of lines for an appearance as a Force Ghost, presumably to have a meaningful conversation with Rey, Luke, or both of them.

Christensen is a source of some division among Star Wars fans, with the younger generation that grew up on the prequels more willing to embrace him — despite the overall shoddiness of much relating to his performance in Episode’s II and III. Older fans prefer not to think about him at all, for the most part. But Christensen is Anakin the same way that James Earl Jones is Darth Vader, and the description of the cameo sounds tasteful and sensible. Why not?

Where will these flashbacks take Rey? | Giphy

In the same way that Rey had that trippy vision in the basement of Maz Kanata’s castle in The Force Awakens, there will be some flashback sequences in The Last Jedi. One such described sequence will be another Forceback vision for Rey, where she will have a flashback of Luke and Darth Vader battling it out at Cloud City in Star Wars: The Empire Strikes Back.

Other rumored flashback sequences involve the destruction of Luke’s Jedi Academy at the hands of Kylo Ren and the First Order — seen in bother the original teaser and the most recent trailer – and moments from the early life of Ben Solo. That could even mean a scene where young Ben is seen in the cockpit of the Millennium Falcon learning to fly from his father.

Most of that is rumors and speculation, but the presence of the scenes from Luke’s Jedi Academy in the trailers seems to confirm that The Last Jedi won’t be shy to flash back to previous events.

Some interesting characters will make an appearance. | Giphy

Porgs are already the subject of scrutiny among fans, and the movie hasn’t even been released yet. There are two kinds of Star Wars fans: Those that love porgs and those that hate them. Okay, so maybe there is room for fans that are simply curious or skeptical of the adorable little creatures. At any rate, we don’t know a ton about them and how the porgs will factor into the plot of The Last Jedi, but man are they cute!

Porgs are native to Ahch-To, and Mark Hamill has confirmed that Luke hasn’t been eating them — so that’s a plus. There are plenty of words on the internet that have been written about loving the porgs, but the big concern can be summed up in one ugly, repeated word: Jar Jar.

George Lucas never shied away from inserting a character into his movies for the sole purpose of selling merchandise, even to the detriment of the film. But Disney did have success with BB-8, the adorable little rolly-ball droid from The Force Awakens. Will they repeat that success with the porgs? Only time will tell.

What the trailer’s subtitles reveal

These new clues reveal quite a lot. | Giphy

Reddit user SleepingAran found some interesting tidbits in the Taiwanese subtitles in The Last Jedi’s international trailer. In the written language, forms of “you” are gendered; it will refer specifically to a male or female. So in the scenes where we had previously wondered who Snoke, Luke, and Kylo Ren had been speaking to, the international trailer subtitles may have revealed the gender of the unseen characters in each instance.

When Snoke says “when I found you” at the beginning of the trailer, the gender is female. This coincides well with the notion that, despite Kylo Ren being featured during Snoke’s monologue, he was actually speaking to Rey.

When Snoke says “fulfill your destiny,” his mouth is obscured and it’s assumed he’s speaking to Rey — she is visible in the scene, after all. But according to SleepingAran, the “you” is masculine in this instance, which means it could be Kylo, Luke, or another male character. Finally, when Luke says, “This is not going to go the way you think,” he’s speaking to a male character. Could it be his nephew?

Big twists on the way 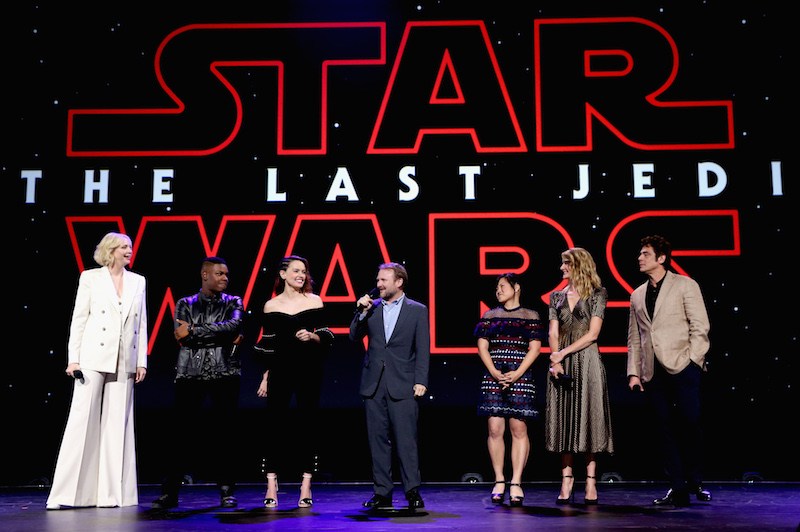 The cast of Star Wars: The Last Jedi | Jesse Grant/Getty Images for Disney

If you’re curious whether The Last Jedi is going to have a major surprise in it, like The Force Awakens with the untimely death of Han Solo, then set your weapons to stun. That is, according to some things director Rian Johnson said at a fan event.

“It was very gratifying for me that Mark and Daisy and the whole of the rest of the cast when they read it were shocked by the things that happen,” he said. “Because they’re kind of the first audience we have for the story and they know the characters better than anybody.”

Johnson goes on to add: “You want it to be an emotional story that makes sense that surprising things happen naturally in. So I hope those are the kind of things that will make audiences gasp when they see this movie.”

We’re so close, we can already taste it!