‘The Last Jedi’: A New Theory About Rey’s Parents Suggests a Mind-Blowing Twist Is Coming 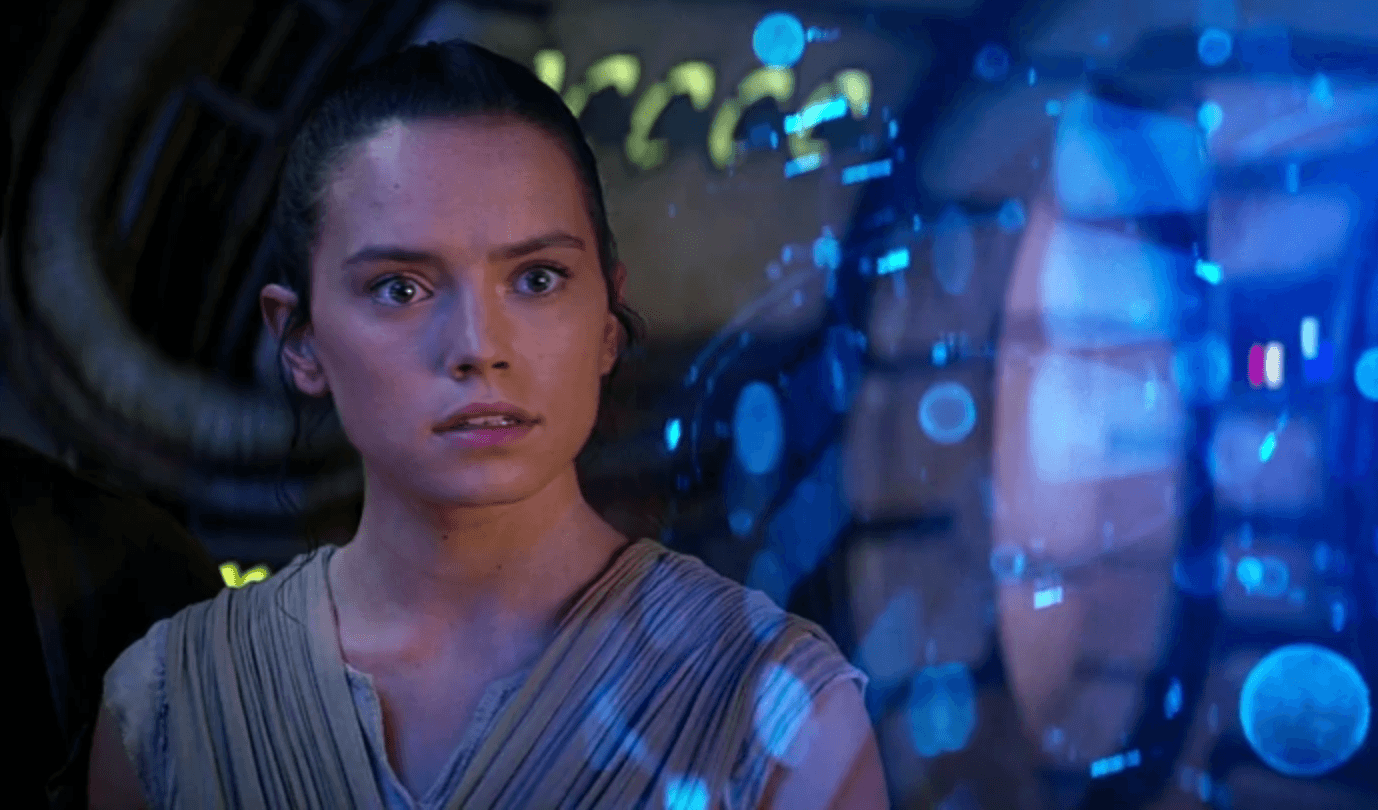 When Star Wars: The Force Awakens was first released in theaters, fans went crazy trying to figure out who Rey, the main protagonist, really is. All that was known about her is that she was extremely strong with the Force and she was left as a small child on the desert planet of Jakku. Disney makes no secret of the fact that they’re hiding something, with an early line between Rey and the adorable BB-8 stating, “Classified, really? Me too, big secret.”

With Star Wars: The Last Jedi on the horizon, people are getting really excited to learn just exactly where this girl comes from. But what if we’ve already figured it out? What if she has ties to the most sinister character in the franchise, Darth Sidious? Some think Rey might be revealed as a descendant of Emperor Palpatine in The Last Jedi, so we looked into that theory and why it’s not as crazy as it seems.

The Skywalker vs. Palpatine history

Rey at the end of Star Wars: The Force Awakens | Lucasfilm

When you really break it down, the story of Star Wars is really that of Skywalker versus Palpatine. Going chronologically, Palpatine manipulated the storyline of young Anakin Skywalker from the very beginning. He brought him to Coruscant, planted seeds of doubt in his mind about the Jedi, and convinced him of his great potential. Eventually, Anakin would be essentially enslaved as Palpatine’s apprentice, unable to break free of the spell of the dark side.

That is, until his son Luke comes along. Star Wars: Return of the Jedi ends with the redemption of Anakin, who turns on Palpatine just in time to save his son from certain death. Wouldn’t it be more interesting if the sequel trilogy kept the Skywalker and Palpatine story alive? We know that Kylo Ren, aka Ben Solo, is of the Skywalker bloodline. If Rey were a descendant of Palpatine, we would get an interesting flip of the script; the Skywalker on the dark side with the Palpatine fighting for the light.

The accent is no coincidence

We can learn a lot about each character’s history based on their accent in the film. | Giphy

The average viewer might see British accents in Star Wars and think nothing of it. Plenty of Imperial officers had British accents, including Grand Moff Tarkin and even the Emperor himself. But Obi-Wan Kenobi had an accent, as did Qui-Gon Jinn and plenty of the good guys. Remember that while both Daisy Ridley (Rey) and John Boyega (Finn) have accents, only Boyega was asked to cover his up for the movie.

In Star Wars lore, British accents are for characters that mainly come from Inner Core planets or dignified worlds such as Naboo, the home planet of Emperor Palpatine. Of course, this could mean that her origin is from any of a list of planets and not necessarily of any relation to Palpatine. But the major point is that accents in the Star Wars franchise aren’t accidental. Even Princess Leia in Star Wars: A New Hope speaks in an accent representative of her royal status when in front of Tarkin on the Death Star. Rey’s accent hints at her lineage in a very big way.

Fighting styles are also very important in the Star Wars universe. From the original trilogy to the prequels and now the sequel trilogy, Force-users utilize unique and often Shaolin Monk-like styles of combat. But Rey was not trained to use a lightsaber, and in fact doesn’t even actually use one at all until the very final scene of The Force Awakens on the crumbling surface of Starkiller Base.

But how she uses that lightsaber is extremely important. Her very first move toward Kylo Ren is to point her lightsaber outward and jab at him. Later, she brings it up over her head and swings downward. There is only one other Force-user that has been seen to fight in such a style: Darth Sidious. In both the scene from Star Wars: Revenge of the Sith where Palpatine takes on Mace Windu and the scene where he fights Yoda, Palpatine can be seen making many of the same moves.

Again, we can’t rule out that this is coincidental. But Ridley had to undergo very specific training on lightsaber duel choreography, which means that Disney went out of their way to make sure her moves were reminiscent of Palpatine.

Rey is pulled by the dark side

Although there are hints in the film, it’s not quite so obvious in The Force Awakens how much Rey is pulled by the dark side of the Force. We see several emotional moments for Rey, from anger to sadness, but nothing that specifically leads us to stand up from our seats and proclaim, “She’s being tempted by the dark side!” In the scene on Starkiller Base, the novelization (which is canon) paints an interesting picture.

“Kill him,” a voice inside her head said. It was amorphous, unidentifiable, raw. Pure vengeful emotion. So easy, she told herself. So quick.

She recoiled from it. From the dark side.

The fact that it’s referred to as amorphous and unidentifiable, we can rightly conclude that this wasn’t Supreme Leader Snoke reaching out to her through the Force. No, this was something deeper and possibly even more sinister. Could it be Palpatine, reaching out to his granddaughter to steer her development?

In the canon novel After Math: Empire’s End, we learn quite a bit more about the significance of Jakku to Emperor Palpatine. After feeling the pull of what would end up being Snoke’s dark side energy, out in the unknown portions of space, Palpatine had a vision of his death. He decided that if he were to die, he would want the Empire to die along with him. So he had an observatory set up on Jakku where a trap would be laid for the Rebel Alliance.

Things didn’t go exactly according to his plan, but the Empire did end at the Battle of Jakku. A few remnants of the Empire would make it to the unknown regions, and when they would return they had Supreme Leader Snoke leading the way. But why Jakku? What significance did it have to Palpatine, and why is it that this was the planet that Rey would be abandoned on just a handful of years later?

Considering that we had not even heard of this planet prior to The Force Awakens, it would be awfully coincidental for these two storylines not to intertwine in some way.

When Rey touches Anakin’s lightsaber in Maz Kanata’s castle in The Force Awakens, she has a trippy vision of the past. We hear Darth Vader’s breathing, Luke Skywalker, Yoda, and Obi-Wan Kenobi. We see the interior of Cloud City, Luke’s Jedi Academy, and Starkiller Base. But one extremely overlooked aspect of her vision was the cameo of Emperor Palpatine.

While he is not seen, we hear Palpatine at least twice. When Rey stands in the hallway on Cloud City and the room begins to spin, we hear the same noise as the one made by Palpatine as he does a flying-spin with his lightsaber in Revenge of the Sith. Later, those with sharp hearing can make out Palpatine’s line to Anakin, “ … achieve a power greater than any Jedi.” While the voices of Yoda and Obi-Wan were fairly obvious in the vision, the notes from Palpatine were hidden much more carefully. All of these things are done with a purpose, so it’s difficult to shrug this off as nothing.

Who else even makes sense?

The case for Rey being Luke’s daughter is difficult to make, especially when you consider that the canon novel Bloodline takes place around the time that Rey should be a small child. While Leia is in contact with Luke during this time, at no point is Rey ever mentioned. To top it off, wouldn’t Rey being Luke’s daughter be a bit on the nose? For all the speculation, it would be kind of lazy for the big reveal to be that she is, indeed, a Skywalker.

Another idea is that Rey is related to Obi-Wan Kenobi, explaining her British accent. While that might be a cool theory, it’s hard not to realize when we examine it objectively that her ties to Kenobi through The Force Awakens and the canon novels are fewer than her ties to Palpatine.

Just based on the obvious timeline, there is no way that Rey could be the daughter of Emperor Palpatine. She is 19 years old at the time of The Force Awakens, which means she was born around 10 years after Palpatine died at the Battle of Endor. But she could be the granddaughter of Palpatine, because it doesn’t seem out of the realm of possibility that he would decide to father some children during his evil reign as Emperor.