5 Things We Learned From ‘The Walking Dead’ Season 7 Premiere

After months of waiting, wondering, and hoping for the best, we finally have an answer to The Walking Dead‘s now infamous Season 6 cliffhanger. And despite fans grousing about just how painfully we were left hanging last April, many of us may now be wishing we could have held out just a little bit longer before the big reveal — because it was brutal.

The Season 7 premiere did more than just deliver on the oft-promised brutality of Negan’s first kill, though — it set the stage for a series that may look very different than it has in seasons past. Here’s everything you need to know about The Walking Dead‘s Season 7 premiere and what to expect in the weeks to come.

1. Who the gang lost

The Walking Dead‘s creators promised something big when the series returned this fall — and whether we like it or not, they delivered. After stringing us along for a few minutes, the episode, “The Day Will Come When You Won’t Be” finally revealed who was at the other end of the wrathful swing of Negan’s baseball bat: Abraham, the strong-willed, sharp-tongued former military man. Unfortunately, that blow was only the first: To make sure Rick’s gang really knew he meant business, Negan also beat Glenn Rhee to a bloody, unrecognizable pulp. Some fans may have been shocked at Lucille pulling such a brutal double-duty, but one fact remains: Both men are a huge loss to the The Walking Dead family, and the fallout from their deaths will likely continue throughout Season 7.

2. Daryl is in for a rough ride 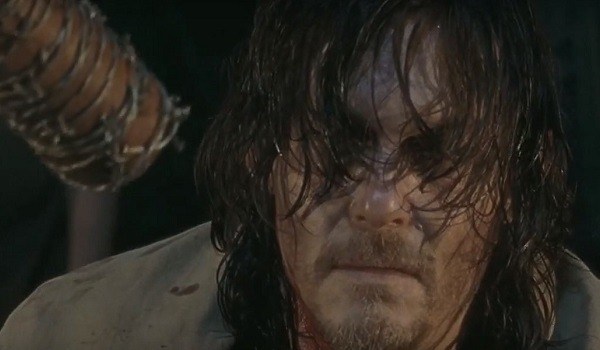 Daryl has long been a fan-favorite character — but just because he escaped Negan’s immediate wrath, doesn’t mean he’s safe by any means. After Abraham’s swift demise, Daryl inexplicably forgot to heed his new foe’s warnings about staying quiet, and sucker-punched him. Instead of paying the price for stepping out of line, he had to watch his longtime friend and ally, Glenn, die as well — and know the entire time that it was, in many ways, because of his actions. Not only will he have to live with that — but he was also carted off by Dwight at the end of the episode while Negan let the rest of his friends go free. Whether he’s being held as ransom to make sure Rick ponies up, or whether Negan has something more sinister in mind remains to be seen. But we do know it’s about to get a whole lot harder for The Walking Dead‘s resident tracker.

Most of the Season 7 premiere was told directly through Rick’s perspective — which means we got a front row seat to watch as the once fearless leader became a broken shell of his former self. It wasn’t just that he lost two members of his family — Negan also subjected him to a kind of psychological warfare, taunting him and testing him after taking him out for a drive. When he wasn’t satisfied that he’d driven Rick into submission, he pushed him even further, by threatening to make him cut off Carl’s arm. He didn’t — but the pressure was enough to make Rick fold. And now that he’s promised to obey Negan’s new world order, it’s hard to see how he’ll be able to live up to the other promise he made in the episode’s opening moments: to kill Negan.

4. Maggie may have to be ready to lead

At this point in the series, it’s hard to argue that anyone has lost more than Maggie. Over the seasons, she’s bore witness to the brutal deaths of her father, her sister, and now her husband. She’s just experienced the worst trauma imaginable — yet at the end of the Season 7 premiere, she was still holding it together better than Rick. As she prepared to carry her husband’s remains to the Hilltop alongside Sasha, it was clear that she may be one of the gang’s only chances to stop Negan — even in her weakened state. We’ve watched Deanna and Gregory prime her for a leadership position. Now that she has more reason than ever to fight, she may be ready to show everyone how truly strong she is.

5. Negan is really, seriously, the worst

We knew, from the few minutes we got to spend with Negan at the end of Season 6, that he was a little, well, extreme. But now that the dust is settling around the Season 7 premiere, it’s safe to say that we had no idea just how unhinged he truly is. He’s able to calmly — even convivially — talk about the death and destruction he’s wrought, and certainly showcased a truly sadistic streak when he doled out his punishments on Abraham and Glenn. While he’s charming and seemingly clear-headed, we can make no mistake: Negan is the biggest threat that The Walking Dead has ever seen, walkers included. And his presence in the series heralds a more nihilistic, unsettling atmosphere that likely won’t be receding any time soon.