It’s been 50 years since Star Trek first premiered, and TV viewers boldly went where no man (or sci-fi series) had gone before. Gene Roddenberry’s classic show wasn’t just a fun and exciting look at the future of space exploration. It kickstarted imaginations around the world, and launched a franchise that includes multiple TV spinoffs and multi-million dollar movie series.

Because it’s such a groundbreaking series, there has been arguably more supplemental information released than there is actual content from the Star Trek show itself. Fan theories, fiction, scholarly papers, and countless sites offer up detailed examinations of Roddenberry’s universe. Unfortunately, as you probably know, you can’t believe everything you read on the internet — in fact, there are some well-established pieces of lore that are actually false. Here are five common assertions about Star Trek that are not entirely true.

What do you think of when you picture a Star Trek fan? Most likely you think of a nerd in their parents’ basement who spends their free time dressing up as their favorite character and throwing the Vulcan salute at anyone who passes by. The concept of a “Trekkie” — a Star Trek fan that shies away from normalcy and social interaction — has long been part of our pop culture, but the stereotypes that have been perpetuated are both inaccurate and unfair.

Sure, fandom can be nerdy; but these days, it’s a lot more socially acceptable to embrace geekiness of all kinds. And Star Trek, like any other big entertainment franchise, has an impressively diverse fan base. NASA scientists, billionaire Richard Branson, and celebrities like Mila Kunis all count themselves as Trekkies. In other words, there’s no wrong way to be a Star Trek fan — and absolutely nothing wrong with being one, either.

2. The series was cheap to make

One of the frequently cited reasons for Star Trek‘s awesomeness was that it was a pretty low budget production. Given the relatively outdated look of the sets and costumes, and the fact that episodes cost about $190,000, it looks and certainly seems like a pretty easy claim to make. The rationale behind this argument isn’t exactly sound, though.

For one thing, Star Trek‘s budget was equitable with many other series at the time, like Lost in Space and Mission: Impossible. Plus, it’s important to consider inflation — in 2016 dollars, the average episode budget was equivalent to about $1.4 million. That’s still lower than the average for many popular TV shows today — but it’s not exactly chump change.

Even if you’ve never seen Star Trek, you’ve heard the catchphrase. You probably even have a vague understanding of what it means. But despite its widespread pop culture use, “Beam me up, Scotty!” was never actually said on the series.

That’s not to say there weren’t nearly verbatim iterations of the famous phrase. At varying times in both the TV show and the original Star Trek movie, we heard “Beam us up,” “Beam me up,” and even “Scotty, beam me up” when Kirk or other crew members needed a little transportation assistance from the Enterprise’s engineer. Ultimately, though, they never uttered those iconic words in the order that so many fans seem to remember.

Some of the most instantly recognizable elements of the Star Trek universe are those unmistakable Enterprise uniforms. The bright colors worn by varying ranks of command and the simple yet somehow futuristic logo are permanently burned into any Trek fan’s memory. But though we all think we remember them well, there’s one crucial detail that we’ve had wrong without even knowing it.

Captain Kirk’s oft-worn gold uniform wasn’t actually gold at all — it was an avocado shade of green. This one may seem mind-bending — after all, it sure does look gold. But series veterans and those who’ve seen William Shatner’s costume in person can attest to the fact. When the studio lights hit Kirk’s uniform during filming, it ended up reflecting an entirely different hue. If you need further proof, look to the green tunic-like uniform that Kirk occasionally donned; it was decidedly green, just like his other outfits were supposed to be. 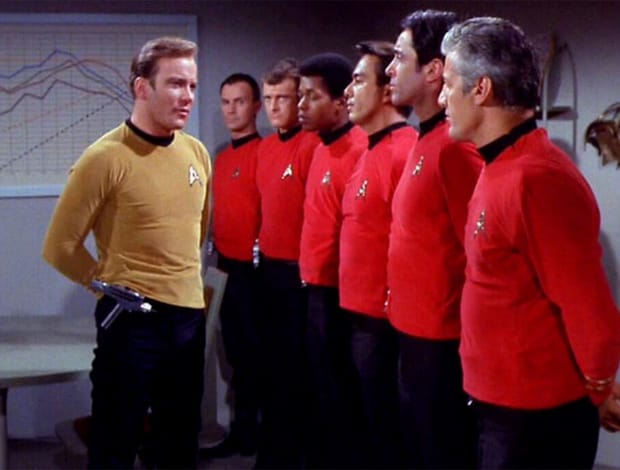 The presence, and often the untimely fate, of the “redshirts” is one of the most beloved inside jokes within the Star Trek fandom. It’s spawned numerous pop culture references on series, memes, and more than a few awesome Halloween costumes.

But even though it’s commonly believed that the Enterprise crew members were prone to death, that isn’t exactly the case. Eagle-eyed fans have run the numbers and have reached varying conclusions about the likelihood of a redshirt biting the dust. While they’ve concluded that about 73% of characters that died were, in fact, wearing the dreaded color, only about 10% of redshirts actually died. So in conclusion, they died a lot — but not as much as we’ve been led to believe.