Life Lessons We Can Take Away From ‘Battle of the Sexes’

On Sept. 20, 1973, the most-watched sporting event of all time took place. It was a match between tennis greats, 29-year-old Billie Jean King and 55-year-old Bobby Riggs.  In what has now been dubbed the Battle of the Sexes (which took place in the midst of the Women’s Liberation and LBGTQ Rights movements), the two faced off in a contest not just for the top title in tennis, but in the struggle for women’s equality.

At the time of the match, King was the best female player in the world while Riggs was a has-been of a former generation who enjoyed gambling and living off of his wife’s money. The match was conceived only after King and the top female players in the world were booted from the Association of Tennis Professionals for demanding the same pay as their male counterparts. At the time, they were offered only an eighth of what the men were making.

In a film helmed by Little Miss Sunshine team Jonathan Dayton and Valerie Faris, Steve Carell and Emma Stone step into the shoes of Riggs and King, revealing the tennis pros’ personal struggles while also showing how unequal, uneven, and sexist things were just 40 years ago — and how little has changed.

Here are some major life lessons you can take away from Battle of the Sexes when it hits theaters on Sept. 22, 2017.

You can expect to see some fiercely empowered women in Battle of the Sexes. | Fox

In Battle of the Sexes, King and World Tennis Magazine founder Gladys Heldman (portrayed by Sarah Silverman) leave the Association of Tennis Professionals, along with other top female players, to form their own tournament.

After finding out how little the Association was willing to pay women tennis players (which was quite frankly beyond insulting), they decided to do something that would cost them tons of precious practice time and energy. Though they started with nothing, the women were able to garner a Virginia Slims sponsorship and began paving the way for female tennis players of the future.

There has been a ton of talk about the gender pay gap in Hollywood and among everyday professionals, but equality always seems just out of reach. King and the rest of these women proved that you might not get what you want today, but you can certainly work toward it.

Sexism is always worth confronting 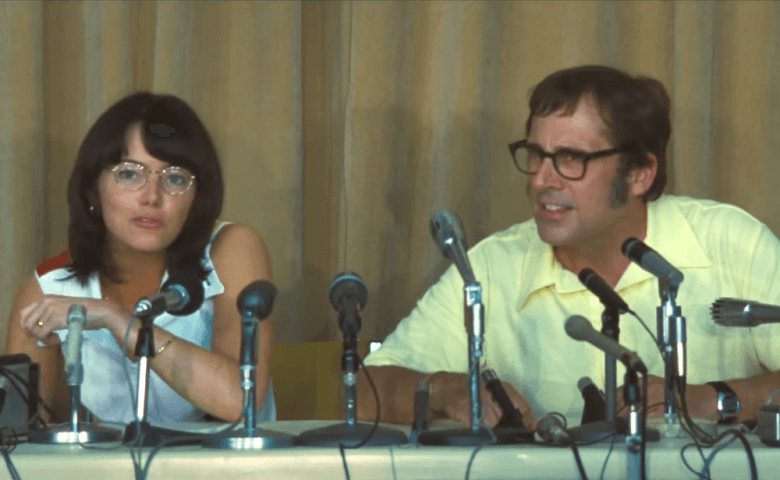 The recent presidential election brought forth a surge of sexism and misogyny that most people hadn’t seen in decades. Certainly, many millennials had never experienced it to such a degree in their lifetimes. However, Battle of the Sexes shows why we must continue to confront it.

From overt comments about women’s appearances to disgusting displays of chauvinism that include touching women without consent and dismissing their greatness, the film was a lot to take in. During the movie’s climax, a news anchor clings on to tennis player Rosie Casals’ (Natalie Morales) shoulder the entire time, and it’s awful.

Both Stone and Carell showed what men were allowed to get away with in the past and how this type of behavior is resurfacing.

1973 was a very different time

While it often seems like we have not come very far, Battle of the Sexes proves just how much we’ve learned about ourselves as a society. In ’73, King couldn’t even call herself a feminist. The legendary tennis player told Marie Claire:

Ninety million people were watching. If I had said I was a feminist, it would have been over. Men hated the term. A lot of women hated it too. Semantics are powerful. I wanted to say something that represented my values but not lose everybody in the process. Still, if you watch the tape I’m talking softly. I didn’t yet have my voice. I felt like I was on a tightrope.

You don’t have to be anyone but yourself

While King was confronting sexism on the tennis court, she was also struggling with her sexuality. The film shows her rocky marriage to her husband while she carried on an affair with her hairdresser, Marilyn Barnett (portrayed by Andrea Riseborough). Bennett was the first woman King had ever been intimate with, but she also deeply loved her husband.

King said, “You have to understand — my parents were from the Depression. They were good people, but they were homophobic. We didn’t talk about my sexuality. I was suffering so much.”

King did not divorce her husband until 1987.

Though Battle of the Sexes paints Riggs to be a bumbling fool who is only joking about being a chauvinist pig, some horrible sexist people benefited and thrived from his attitude. While Riggs was living it up before the match, King came up against continuous obstacles.

She said that she was not offered any sponsorships, though Riggs was offered a $50,000 sponsorship from Suger Daddy. Time magazine also put Riggs on the cover without King.

The film sheds light on issues that are still extremely relevant today. | Fox

King decided to compete against Riggs after tennis great Margaret Court, who has amassed more major titles than any other player in history, lost to him just a few months before. Though Court was willing to play against Riggs, she was and still is a highly conservative woman, who had her own opinions about King, gay marriage, and abortions. She is now a minister and opponent of LGBTQ rights and marriage.

Though they have met on the tennis court more than once, King has no problem speaking out against Court and her ideals. She expressed,

From the time I was 11 years old I wanted to be the best tennis player in the world, because I knew that was how I could make a difference. All I could think about was that all the struggle of the movement would be for nothing if I lost. I had no other choice. I had to win.

History will have its own way with you

The film brings up issues of sexism and women’s rights. | Fox

Though King defeated Riggs in the Battle of the Sexes tournament, many rumors about the match still follow her. King explained:

There were rumors that maybe we were playing with different rules. But you have to understand: By that point he was 55 years old and I was 29. We played straight-up. The battle was always going to be more psychological than physical. I was just tougher that day.

Though the match was the biggest thing King was known for at the time, she is now known as a pioneer of equal and social justice, and she was the first tennis player to receive the Presidential Medal of Freedom.