We’ve already received some pretty strong hints that Star Wars: The Last Jedi may be a major game-changer for the franchise. Since taking over, Disney has done everything they can to let the general public know that they 100% own the direction in which the Star Wars universe is moving. Knowing that Disney isn’t afraid to take the movie out into left field, we’re left to wonder what, exactly, Disney is planning for Episode VIII.

One prominent idea is that it may surprise fans with Luke Skywalker turning against the Jedi and embracing the dark side of the Force. While Luke may not exactly be a Sith Lord, we wanted to explore a few clues suggesting that he may have turned to the dark side in The Last Jedi.

1. Return of the Jedi already hinted at it

Was Luke Skywalker performing his father’s famous Force Choke in The Return of the Jedi? | LucasFilm

If you’re a Star Wars fan and never noticed this, you weren’t paying close enough attention. Luke wears all black throughout the entire course of Star Wars: Return of the Jedi. When he enters Jabba’s palace near the beginning of the film, he uses the force to choke one of the guards. He was tempted to succumb to the dark side of the Force and kill the Emperor. And at the end, it was his anger that helped him overpower Darth Vader.

Now, we know that from there Luke tossed aside his lightsaber and claimed to be a Jedi, like his father before him. But Yoda’s words from Star Wars: The Empire Strikes Back paint a clear image of what was happening: “Once you start down the dark path, forever will it dominate your destiny. Consume you, it will.”

Return of the Jedi dropped some major hints that Luke would continue to battle the dark side beyond his confrontation with the Emperor.

In an interview with Entertainment Weekly, actor John Boyega (who plays Finn) spoke about the differences working under director Rian Johnson. A few of the quotes from Boyega hint that we’ll be seeing some different things in The Last Jedi. He said:

What people fail to understand sometimes is that the success of these stories that will stay with us long-term is to bring new ideas, is to expand the universe. So we can have new stories, new people, just a different perspective is awesome. [Rian] had a chance to really go crazy, and I’m a big Star Wars buff so certain things I saw I was just like, ‘Well, that’s a first.’ And that, for me, is really cool to experience.

What we know about Johnson is that he’s a big fan of George Lucas, a huge prequels defender, and that he’s not afraid to take things in his own direction. Could Luke Skywalker turning to the dark side be part of it? A major character making an unexpected turn wouldn’t exactly be a first for the franchise, but it certainly would be for Luke.

John Boyega has hinted that Rey could join the dark side. | Alberto E. Rodriguez/Getty Images

More from Boyega, this time in an interview with Variety. He said that some of the characters have to decide which side they want to be on.”It’s an epic dark story,” he said. “At the same time it’s still fun. It’s still Star Wars.”

We know that Finn defected from the First Order, so there’s no question which side he wants to be on. Poe Dameron is a Resistance pilot, so no conflict there. Is Rey deciding where she falls as she trains with Luke on Ahch-To? Based on what we’ve seen and what we know about these characters, the one that makes the most sense to be conflicted — having walked away from the fight entirely to hide out on his own private island — is Luke.

And the rumblings that this movie will be on the darker side mesh well with the little tidbits that we’ve learned along the way about what might be happening with Luke. Whether he has officially embraced the dark side of the Force or not, expect that we might find out a little bit about his past and that it could be unsettling.

Luke Skywalker has us all in suspense. | LucasFilm

The biggest and most shocking line in the teaser trailer for The Last Jedi was Luke, standing at the entrance of the Force tree on Ahch-To, looking over his shoulder and saying, “It’s time for the Jedi to end.”

That line could be completely out of context, however. We don’t know who Luke is talking to (a ghost of someone from his past, such as Yoda, Obi-Wan, or Anakin?), and what other purpose might be tied to his statement. It doesn’t seem to be much of a stretch to think that Luke attempted to rebuild the Jedi Order with his academy, so maybe he has rethought his position on how the Jedi ran things during the era of the prequels? I mean, their arrogance did sort of lead to the beginning of the Empire.

But there is always a chance that this is the first hint that Luke may not be living entirely on the light side of the Force these days. Are we hearing a conflicted Luke Skywalker leaning toward the dark side?

Mark Hamill had some strong opinions of his character in this film. | Gerardo Mora/Getty Images for Disney

In an interview with Vanity Fair last May, actor Mark Hamill wasn’t afraid to let everyone know how he really felt about the direction that Johnson was taking both the film and the character of Luke Skywalker. In general, it didn’t leave us with warm and fuzzy feelings.

“Im at one point had to say to Rian, ‘I pretty much fundamentally disagree with every choice you’ve made for this character. Now, having said that, I have gotten it off my chest, and my job now is to take what you’ve created and do my best to realize your vision,'” he said.

This, coming from Hamill, is fairly damning. Now, he did mean to say this in a relatively flattering way toward Johnson, intimating that the director was intelligent and not afraid to step outside the box. But again, Hamill is the same man who was expecting Luke to show up and save the day at the end of Star Wars: The Force Awakens.

“The moment in the forest, when the saber rattles?” he said. “I go, ‘Oh, baby, here I come!’ And then it flies into her hands? I said, ‘What the hell, she hasn’t even trained!'”

What, exactly, is the direction they’re taking that Hamill so vehemently disagrees with?

6. New posters hint at Luke as a bad guy 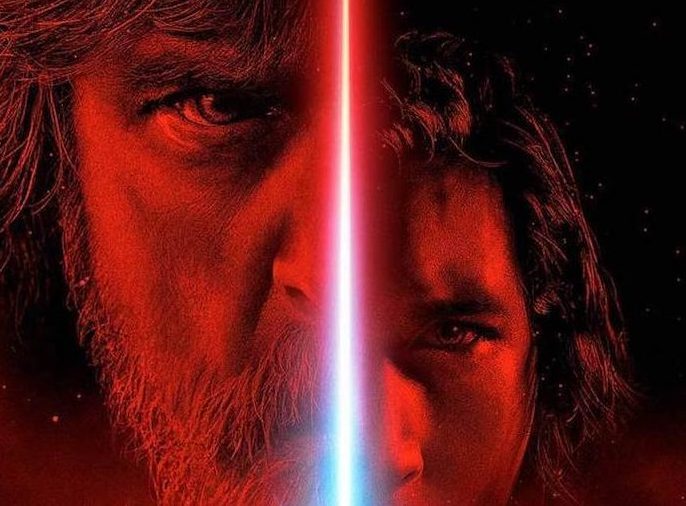 Some recreations of rumored movie poster art for The Last Jedi have been floating around the internet for a while, and they also tend to paint Luke Skywalker into a dark corner. One poster, in particular, shows Kyle Ren, Captain Phasma, Supreme Leader Snoke, and various First Order ships and tie fighters with the image of Luke’s face at the top, looking down over all of it.

This would seem to imply that Luke is indeed, somewhat of a bad guy in this movie. How he would be involved with Snoke and the First Order, if at all, remains to be seen. Is he simply running from all of it? Trying not to get wrapped up in a battle he wants no part of? That theory makes sense, given what we know — or the lack of information we have.

But if we piece it all together — knowing it’s a darker story and that Hamill fundamentally disagreed with the direction of the character, as well as the line, “It’s time for the Jedi to end,” featured in the trailer — this poster seems to be just another hint that Luke may be dabbling in the dark side of the Force.

7. Is Luke actually a Gray Jedi?

Fans are speculating that Luke will become a Gray Jedi. | LucasFilm

Of course, it could simply be that Luke isn’t a Sith or a bad guy at all. We don’t know yet what Snoke really is, as far as Jedi, Sith, and other Force religions go. In fact, as far as we know, the Sith died out with Darth Vader and the Emperor. What if Luke, in finding the original Jedi temple, has embraced a wider view of the Force?

Luke Skywalker may just be a Gray Jedi. Fans of the movies won’t know a ton about this, but those that watch Star Wars Rebels should be familiar with the concept. Essentially, it’s a faction of Force users that walk the line between the light and the dark side. Ahsoka Tano, once the apprentice of Anakin Skywalker, has been rumored to be a Gray Jedi. Many believe that Qui-Gon Jinn may have been a Gray Jedi.

If Luke, in his exile and research of the Jedi teachings, found that embracing both the light and the dark was the true right path, then everything else suddenly makes a lot of sense: why Luke wanted to stay hidden on the island, why he thinks that it’s time for the Jedi to end, and why Hamill may have a major disagreement with the direction of the character. But it’s all just speculation until we get more information.