Longest Celebrity Engagements: Hollywood Stars Who Waited to Get Married (And Why)

We all adore a good engagement story, especially when it involves some of our favorite celebrities. However, getting a ring on it doesn’t necessarily mean that a couple is ready to walk down the aisle right away or even in the next year. Some celebrities are opting for very long engagements leading up to typing the knot.

Here’s a look at the stars who eased into marriage or didn’t make it down the aisle at all after lengthy engagements, leading up to the No. 1 longest celebrity engagement.  You’ll never guess the shocking thing Amy Adams said about marriage (No. 6).

After being in a relationship for four years, in 2006, Maggie Gyllenhaal and Peter Sarsgaard announced they were engaged and expecting their first child together, a daughter named Ramona. The pair eventually did tie the knot in 2009 and welcomed a second daughter, Gloria Ray into the fold.

The pair has been blissfully married ever since. However, they chose to wait three years before tying the knot because they were busy juggling careers and a newborn. Honestly, we get it.

Next: This fashion mogul and former NFL player finally tied the knot after years. Fashion mogul Jessica Simpson and former NFL baller Eric Johnson had a whirlwind engagement. The pair began dating in May 2010 and were engaged by November of the same year.

The duo began planning their wedding but put it on hold when Simpson got pregnant with their first child, a daughter named Maxwell Drew. Their son, Ace Knute, followed just 14 months later.

The two did eventually marry in 2014. During an interview with Good Morning America, Simpson hinted that a wedding was near. She said, “If he wanted to run, he could have run when I was hormonal and pregnant. We need to get married.”

Next: These actors have had one of the most insane relationships in Hollywood.

Megan Fox and Brian Austin Green’s love story has been an emotional saga. The stunning couple began dating in 2004 and eventually got engaged in 2006. However, in February 2009, they decided to go their separate ways. On June 1, 2010, Green proposed again and the pair got married a few weeks later.

In 2015, Fox filed for divorce, but by 2016, the couple had reconciled and welcomed their third son together. It seems like these two are in it for the long haul. We assume their engagement was so lengthy because they were just trying to figure things out.

Next: This comedic couple married only after same-sex couples could legally wed.

Actors Kristen Bell and Dax Shepard began dating in late 2007 and announced their engagement in 2010. However, the duo said they would be waiting to make things official until the state of California passed legislation legalizing same-sex marriage.

The law was passed on June 26, 2013, and the couple was married just a few months later. The couple has two daughters, Lincoln and Delta, and they’ve been open and honest about the wonders couple’s therapy has done for their relationship.

Next: This actress and musician never tied the knot, but they co-parent like champs.

Actress Kate Hudson and musician Matt Bellamy began dating in the spring of 2010 and got engaged the next year, just months before they welcomed their son, Bingham.  Unfortunately, their relationship didn’t last.

In 2014, a source close to the former couple told Us Weekly, “They realized they are in different places in their lives. Matt loves Kate and Bing immensely, so hopefully, they can work through it.” Luckily, they are still on good terms and are fantastic co-parents.

Hudson has since moved on and is expecting a daughter with her boyfriend, Danny Fujikawa.

Next: After five years this couple did tie the knot, but they are currently separated.

La La and Carmelo Anthony were engaged for five years before finally tying the knot in July 2010 at a beautiful plush wedding in New York City. The Power star had said she wanted to wait to get married because she was nervous that it would shift their relationship. The actress and the NBA star share a son Kiyan.

Though the duo is still married, they separated in 2017 following allegations that the NBA baller had been unfaithful and had fathered a child with another woman. For her part, the former MTV VJ told Wendy Williams that a divorce was not in the cards at the moment.

Next: This adorable duo has been engaged for years, have two kids, and no wedding bells in sight.

Olivia Wilde and Jase Sudeikis began dating in 2011, and the actor quickly decided Wilde was the love of his life, so he popped the question in 2013. Shortly after that, the couple welcomed their first child a son, Otis Alexander. In 2016 they welcomed their daughter, Daisy Josephine.

The couple appears to be super content and don’t seem to be in a rush to wed. We’re sure they will make things official whenever they are ready.

Next: After 5 years, this couple decided they wanted forever.

Brooke Burke and David Charvet’s romance gives us storybook vibes. The pair met, began dating, and got engaged in 2006. They went on to have two children together but didn’t make things official until they wed in a surprise ceremony on Aug. 12, 2011.

They eventually tied the knot because they decided it was time. In a 2010 blog post, Burke wrote about the conversation that sealed the deal. She wrote, “Do you want forever?’ David asked. “Yes, I need forever,” I said. It was just that simple. I would like to have a husband.”

Next: These actors took eight years to say “yes.”

Comedian Sacha Baron Cohen and actress Isla Fisher took their time getting down the aisle. The duo began dating in 2002, got engaged in 2004, and finally walked down the aisle in a stunning ceremony in Paris in 2010. The pair now has two daughters, Olive and Elula.

Fisher has always been adamant about where she stands when it comes to Baron Cohen and her kids. In a 2013 interview with Cosmopolitan, she said, “My priority is always my family.”

Next: This Oscar winner was never in any rush and did things on her own time.

Actor/director Darren Le Gallo and actress Amy Adams were never in any rush when it came to their relationship. The pair had dated for 11 years before Le Gallo popped the question in 2008.  The couple’s daughter, Aviana, was born in 2010. However, starting their family didn’t prompt the couple to rush down the aisle.

In 2014, Adams told Vanity Fair, “I’m not getting married anytime soon. I know he’s completely capable and lovely, and beautiful.” The lovely couple did eventually wed in 2015.

Next: This cute couple couldn’t reconcile their differences and stay engaged.

Actors Rachel Bilson and Hayden Christensen first began dating in 2008 after meeting on the set of the film Juniper, and they quickly got engaged. However, just two years later in 2010, they called their engagement off but reconciled within three months. The duo welcomed a daughter, Briar Rose, in 2014.

Unfortunately, the couple’s bliss did not last. They called it quits permanently in 2017. A source close to the couple told People, “Rachel is very outgoing and her friends are very important to her. Hayden is the opposite. He can be very antisocial.” Apparently, their differences were just too much for the couple to overcome.

Next: After nearly a decade this couple decided marriage wasn’t in the cards.

Jennifer Hudson and David Otunga became engaged in Sept. 2008 on the singer’s 27th birthday. During their time together, Hudson dealt with a terrible personal tragedy and her career continued to skyrocket. Otunga focused on raising their son David, Jr.  Though the couple didn’t appear to have any plans to head down the aisle, they seemed happy until it all imploded in the fall of 2017.

In a very messy and public breakup, the songstress and former wrestler fought bitterly for custody over their only son, until Otunga was granted primary custody. At the time of their separation, a rep for Hudson told US Weekly, “They have been in the process of ending their relationship for a number of months.”

Victoria Secret supermodel Alessandra Ambrosio got engaged to businessman Jamie Mazur in 2008. Though they have two children together, Anja Louise and Noah Phenoix, the couple never made it down the aisle. In 2013, there were rumors of a trial separation. Then in a 2016 interview with Cosmopolitan, Ambrosio got candid.

She said, “If I have been engaged to him for eight years, then it’s not my priority. I have a lot of things going on, and I haven’t got married because I’m so busy. I’ll think about that when I have time off.”

We guess it just wasn’t meant to be.

Next: This mogul decided she wasn’t into “traditional.” 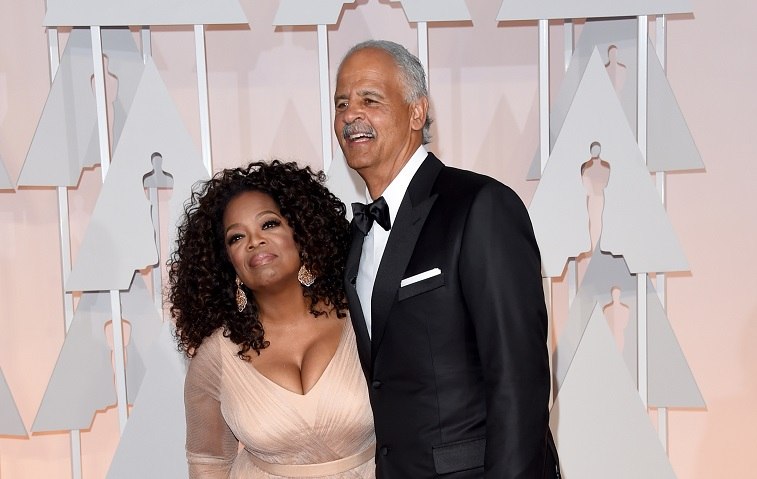 We always knew that Oprah Winfrey and her long-time love Stedman Graham had been together for awhile, but we had no clue the couple was engaged. The pair became engaged in 1992, but don’t expect them to ever sign on a dotted line.

In 2013, the media mogul told Access Hollywood, “If you ever interviewed him, he would tell you that had we married, we would not be together today. The wife title comes with expectations. He’s a traditional man, and this is a very untraditional relationship.”

Next: 28 years later this couple finally made it official.

So we’re not exactly sure if Gene Simmons and Shannon Tweed were ever officially engaged, but we do know the couple has been together since 1983. The musician and the actress have two adult children together, Nicholas and Sophie. They officially tied the knot in 2011 on the sixth season of their reality series, Gene Simmons Family Jewels. We guess it’s never too late to make things official.

We suppose they just finally decided it was time.

Read more: The Worst Celebrity Couples of All Time