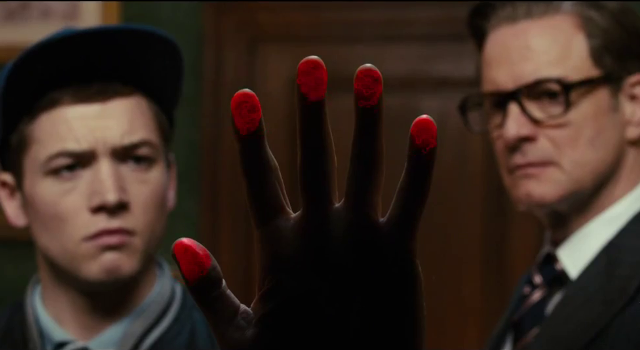 The first trailer for Kingsman: The Secret Service suggests a fun, funny, accessible action flick concerned with espionage and boys playing with (exploding) toys, sort of like James Bond for millennials.

Starring the always-compelling Colin Firth and featuring a solid group of supporting players (Mark Strong, Michael Caine, Samuel L. Jackson, Jack Davenport, Sofia Boutella), the film depicts a young British holligan (Taron Egerton) who is recruited by Firth to train for the super secret clan of spies. Firth’s character is a clothing tailor whose shop is secretly the spies’ HQ, so everyone is, of course, impeccably dressed. Sartorial spies are the best spies — just ask Daniel Craig.

Firth last played a spy in Tomas Alfredson’s brilliant enigma of a film Tinker, Tailor, Solider, Spy, which starred Gary Oldman (who earned his first Oscar nom for his staid performance), John Hurt, and Benedict Cumberbatch. TTSS is a slow-burn head-scratcher that demands to be seen two or three times to be understood. As visually lush as it is cerebral and intricately-plotted, Alfredson’s film is the antithesis of a Bond film; the suspense builds like so much water against a cracking dam, but when the action finally comes it’s more of a squirt than a full-on rupture. And yet it’s more satisfying than any of the pre-Craig Bond films because it makes you earn your entertainment. It totally deserves this mini-digression.

Kingsman doesn’t seem to be that kind of movie. (TTSS made a modest $80 million on a $20 budget but it didn’t set the world on fire.) Kingsman showcases some hard-hitting action and a Doors’ song, which is odd given the film’s overt Britishness. And the camerawork seems pretty nifty, based on the fleeting clips.

Matthew Vaughn, director of Kick-Ass and X-Men: First Class, is behind the helm, co-writing with his frequent writing partner Jane Goldman. It’s Vaughn’s third comic book adaptation; the source material, a series of six comics that ran from 2012 to 2013, was written by Kick-Ass creator Mark Millar and drawn by Watchmen‘s Dave Gibbons. The comic series is fine but nothing to write home about, so Vaughn won’t have to worry about any slavish loyalty à la Zack Snyder and Watchmen.

There are plenty of reasons to be excited for Kingsman. First, Colin Firth. He can’t not be compulsively watchable. It’s like encoded in his DNA. The trailer for Kingsman displays a definite flair for comedy, and Firth was a deadpan master in Bridget Jones’s Diary, arguably the best rom-com of the last twenty years. Plus, Firth reportedly broke a tooth doing his action scenes, so that’s intense.

Second, Vaughn has been getting gradually better as a filmmaker. Layercake was…well, a movie. Stardust had some flair and a great turn by Robert De Niro. Kick-Ass was gaudy in a good way, and First Class had a discernible thread of earnestness of poetry running through it, even if it had the difficult task of purging memories of X-Men: Origins.

Third, Jack Davenport is a super under-appreciated character actor. Watch him in the second half of The Talented Mr. Ripley, which is admittedly the film’s lesser half, but Davenport plays a wonderful foil to Matt Damon’s anxious murderer and Cate Blanchette’s luminosity.

And fourth, Mark Hamill has a cameo, which is lifted from the comics. Suffice it to say it could be the best celebrity cameo in a blockbuster film since Bill Murray took a shotgun to the chest in Zombieland.