With Netflix’s Luke Cage set to kick off in the fall, fans are finally getting a glimpse of what’s to come from the anticipated comic book-inspired series. New footage from the show, which marks Netflix’s third solo Marvel title, was unveiled at San Diego’s Comic-Con, along with several other details of what audiences can look forward to.

1. Luke Cage is far from your typical “good guy”

We already knew that Luke was a major badass from his introductory stint on Jessica Jones, but that persona was reinforced big time in the Luke Cage’s awesome new teaser trailer. The teaser captures Luke in his absolute element, taking down a slew of people with hilarious ease. As the clip shows, he’s basically a walking wrecking ball. He’s shown punching through walls, kicking through doors, and speeding through a load of bullets — all while also sending his adversaries literally flying into the ceiling behind him.

Given all the punching, shooting, and bone-crushing, it’s clear that Luke Cage won’t be reserved when it comes to violence — which only makes sense, as Luke clearly isn’t your average do-gooder hero.

The teaser is set to Ol’ Dirty Bastard’s “Shimmy Shimmy Ya,” which is a good indication of what to expect from the show’s soundtrack. Hip-hop music will play a major factor in the freshman season. Showrunner Cheo Coker described the show as the “Wu-Tang-ification of the Marvel universe.” Case in point? As announced during the panel at Comic-Con, every episode of the series will be named after a song by the rap duo Gang Starr.

3. It will have political undertones 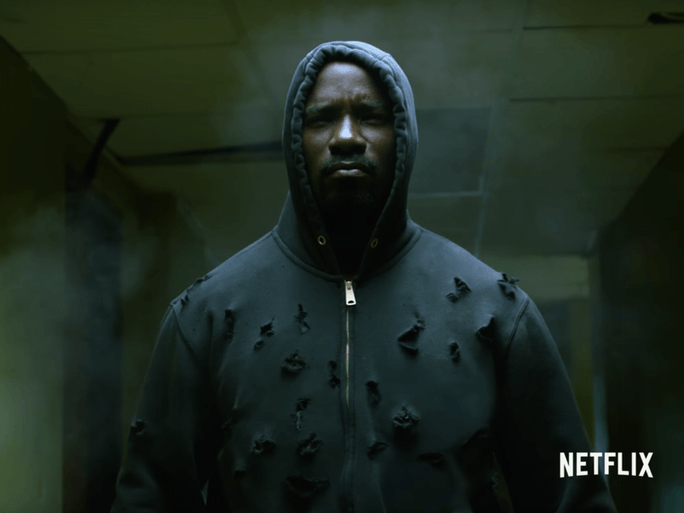 The release of Luke Cage is proving to be extremely timely, considering the current conversation surrounding racism and police brutality. While the references to these themes may be subtle, they will definitely be present, with powerful images like a hooded Luke taking bullets (above).

As Coker said at Comic-Con, “There aren’t a lot of African-American superheroes. I’ve been reading comics since I was eight or nine years old. Luke Cage stood out,” also adding, “When I think about what’s going on in the world right now, the world is ready for a bulletproof black man.”

4. Cottonmouth will be more than just a villain

The trailer also gave viewers their first glimpse at Mahershala Ali as New York’s slick, notorious drug kingpin, Cornell “Cottonmouth” Stokes. In the comics, Cottonmouth is one of Luke’s long-running enemies, who tries to recruit Luke into his sprawling criminal organization. When that fails, Cottonmouth turns his attention to trying to take the bulletproof hero down

In the teaser, Cottonmouth is seen mocking Luke for calling himself a hero. Despite that, Ali doesn’t consider his character a straightforward villain, but as someone in a morally grey area. “[Cottonmouth] is locally at least, at the top of a food chain and Luke Cage is very much a threat to that order, because he comes in with a different moral compass,” the actor told Hitfix, before adding, “By no means, do I look at Cottonmouth as a villain per se, but I imagine Luke does.”

5. Harlem will play a major role

In the trailer, Cottonmouth refers to Luke as “Harlem’s hero” and though he may say it scornfully, it is significant. Like Hell’s Kitchen in Daredevil, the neighborhood of Harlem will practically be another character in the series, with its history and cultural significance helping to shape the identity and feel of the show and Luke’s story. “We all have numbers on the call sheet, but Harlem deserves a number on the call sheet, as well,” Luke Cage co-star Alfre Woodard said of the setting. Woodard then added, “Everything that makes Harlem important through the ages is all there.”

Luke Cage is set to premiere on Netflix on September 30.