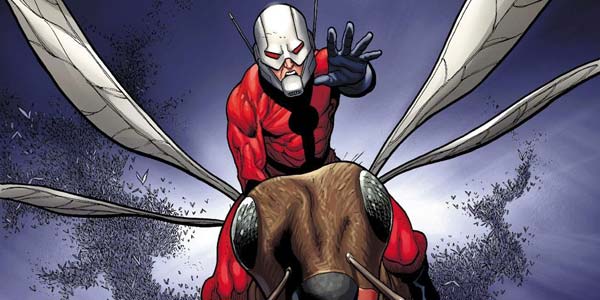 Marvel’s latest superhero flick, Ant-Man, is moving forward very gradually, with the studio bringing in two more writers to join the team. According to Latino Review, Gabriel Ferrari and Andrew Barrer have been hired to rewrite the already revised script and serve as production writers during the shoot.

The move is yet another step away from the vision of the original brain behind the film, Edgar Wright. Wright left the project in late May due to creative differences, and the studio subsequently brought on director Peyton Reed (Bring It On, Yes Man) to helm the project. The script, initially written by Wright and Joe Cornish, then underwent an initial revision from Anchorman filmmaker Adam McKay (who won Marvel’s approval with his pitch, but didn’t have the time to also direct the movie). But apparently, all of those changes weren’t satisfying enough, as the script is now undergoing yet another rewrite, this time under this pair’s tutelage.

Ferrari and Barrer first broke out with the 2010 Black List screenplay Die in A Gunfight, but it was apparently their involvement in the as-yet unproduced Sabrina the Teenage Witch remake that caught Marvel’s attention and sealed the decision to bring them on board. The two will reportedly be on hand on the Atlanta set of Ant-Man for the next few months, which Latino Review reports is not an uncommon practice during the shooting of major blockbusters. It’s still unclear which of all of the writers will be receiving credit for their participation in the film.

Though the script may still be a work in progress, the two main cast members have at least been nailed down, with Paul Rudd and Michael Douglas in the lead roles. Marvel released the following general synopsis recently, along with the announcement of the new director:

“Armed with the astonishing ability to shrink in scale but increase in strength, con-man Scott Lang (Rudd) must embrace his inner-hero and help his mentor, Dr. Hank Pym (Douglas), protect the secret behind his spectacular Ant-Man suit from a new generation of towering threats. Against seemingly insurmountable obstacles, Pym and Lang must plan and pull off a heist that will save the world.”

Now fans are left wondering where exactly Ferrari and Barrer will take the movie’s script. Some are already predicting that the film is likely to end in disaster, given the multiple drafts the project has already gone through, even after so many years in development. But others are still hoping that the addition of these writers, who are still relatively new to the industry, will be able to give the flick some fresh and much-needed direction. No matter which side of the fence you’re on, one thing’s for sure: Marvel better figure it out fast, because the production company doesn’t have much time on its hands.

While the making of the movie has obviously undergone its fair share of drama, Ant-Man is slated to hit theaters on July 17, 2015. It will also be the first movie for Phase 3 of the Marvel Cinematic Universe, followed by Captain America 3, set to hit theaters in May 2016.