Marvel Is Doing ‘Civil War,’ But How? 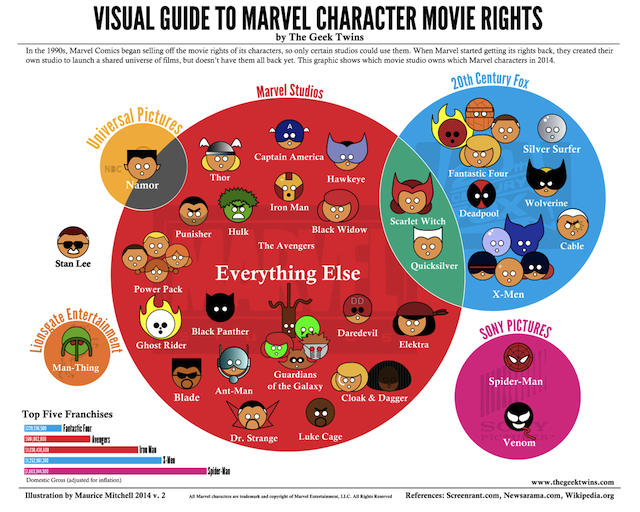 Earlier this week, Marvel Studios held a special event at the El Capitan Theatre in Hollywood and announced a myriad of upcoming projects for the next several years. Among them is a third Captain America film officially titled Captain America: Civil War. Rumors had been circulating for a number of weeks that this was the direction for the Captain America franchise and with the leak of the Avnegers: Age of Ultron trailer a week ahead of schedule, people felt comfortable believing the rumors (so comfortable that Marvel decided to throw everyone for a loop by initially announcing the movie’s title as Captain America: Serpent Society, which was quickly revealed to be a joke by Kevin Feige, Marvel’s current president).

Marvel’s Civil War comics series proved to be hugely successful and have been a source of passion for comic book readers since its release in 2006. Faith in the idea that the series would ever be turned into a feature length film never fully developed though, mainly due to how severely fragmented so many of Marvel’s franchises are. The movie rights to Marvel’s characters and franchises, many of which feature prominently in Civil War, are split and owned by different movie studios that have held onto the rights for years.

The division between movie studios of Marvel’s popular characters could make creating a Civil War that adheres to the source text extremely challenging. Just how Disney plans on tackling this challenge and still doing the extremely popular story line justice is up in the air. Who, specifically, can Disney use and not use in its film? What characters are going to have to be cut from Captain America: Civil War? What heroes are going to have to fill the void in the adapted story line? The answers to these important questions can be pieced together from the trail of bread crumbs Marvel and Disney have already begun to lay.

The property rights of Marvel’s super heroes and heroines are a convoluted mess. To put it simply, Marvel announced that it was being bought by Disney at the end of 2009, but that didn’t necessarily give Disney the power to use any and all of the comic super giant’s titles and franchises. For example, the movie rights to X-Men and Fantastic Four are owned by 20th Century Fox, while the Spider-Man universe is controlled by Sony. This is mainly due to Marvel selling off the movie rights of various hero franchises in the ’90s when the company was going through bankruptcy. Other characters were sold off to other companies but have been reacquired by Marvel Studios since it’s been back on its feet. The main franchises it still has been unable to regain are those listed above: Fantastic Four, X-Men, and Spider-Man.

Those missing franchises have the potential to have adverse effects on Captain America: Civil War. Vital characters in the Civil War comic — such as Wolverine, Spiderman, and Mr. Fantastic — have no place in the upcoming movie as the character rights are all owned by different movie studios that show no sign of letting go anytime soon.

Marvel is left with only one other option in this situation — to make due with the characters it does have (which are ample). Viewers are all but guaranteed to see characters introduced in the previous two Captain America films, like Scarlett Johansson’s Natasha Romanoff, better known as Black Widow; Falcon, also known as Samuel Wilson, played by Anthony Mackie; and the Winter Soldier, Bucky Barnes, played by Sebastian Stan.

In addition to the familiar faces we’ve seen in other Captain America films, Marvel is debuting a new character in Civil War. Black Panther is a beloved character from Marvel comics that debuted as the first black super hero in mainstream comics in 1966. The character has become a heavy hitter in the Marvel universe, keeping up with many super-powered humans, mutants, and aliens with only his brains, brawn, and regal lineage. Black Panther is going to be a huge asset to the film, not just because of the inherent awesomeness of the character, but because he has the ability to fill the void left by many of the characters mentioned above.

During the El Capitan event, actors Robert Downey, Jr. and Chris Evans, who play Iron Man and Captain America, respectively, jokingly fought over Black Panther actor Chadwick Boseman in a way reminiscent of how their characters sought to win over the allegiance of Spider-Man in the Civil War comics. You can see the clip below:

The stunt hints at the idea that Black Panther may be filling the void of Spider-Man in the movie adaption without belittling the character’s rich history and relevance, ensuring the respect that Black Panther deserves as a stand alone title character. Chadwick Boseman will go on to star in Marvel Studio’s Black Panther in 2017, according to Marvel.

Another Marvel character that has the potential to make an appearance is Ant-Man. An original member of The Avengers in the comics, Ant-Man has yet to be introduced in the Marvel Cinematic Universe. That is going to change since Marvel Studios has an Ant-Man movie in the works with a release date of July 31, 2015. As Ant-Man, played by Paul Rudd, is going to be introduced before Captain America: Civil War, there is every possibility that the hero may also be asked to choose sides in the war. Playing an integral part in the comic series, it would only make sense to include him in the film adaptation as well. However, there has been no official confirmation from Marvel Studios that Paul Rudd will be participating in Captain America: Civil War.

Ant-Man is not the only Avenger to feel left out of the film. It’s anyone’s guess as to whether any of the other Avengers will be involved in this movie adaptation of Civil War. The Avengers are heavy participants in the source material, but the super hero group was a much different lineup than what the current Marvel Cinematic Universe is today. Further ruling  out the possibility of the rest of The Avengers joining in is the fact that only Robert Downey, Jr.’s Iron Man has been officially announced in Captain America: Civil War. In fact, this film is the final Marvel property that Robert Downey, Jr. is currently scheduled to be in, as seen on IMDB.com.

That fact, coupled with a few others, is enough to speculate on one final deviation Captain America: Civil War may make from the original comic story line. However, be warned. Articles like this always have the potential for spoilers: The following may be a large one for fans unfamiliar with the events and fallout of Civil way, please continue at your own risk.

Possibly the most dramatic result of Marvel’s Civil War, though indirectly, was the death of Captain America, the first Avenger, one of the most beloved and recognizable Marvel comic book characters. His death was a huge blow to comic book fans and even made national news. If the movie plans on following in the comic’s footsteps, then audiences may see the death of Captain America in theaters as well. But the Marvel Cinematic Universe is drastically different than its comic books.

Iron Man is the star child of The Avengers as well as the fan favorite. Despite being a billionaire-playboy-philanthropist, he’s still the most human of the major heroes. He isn’t a god, he doesn’t have inherent super powers, he’s a flawed human being. Certainly audiences connect and adore Robert Downey, Jr.’s portrayal over most other heroes Marvel Studios has produced. Meanwhile, those who have read the Civil War comic know what to expect; Cap’s death. Killing off a character that plays second string in the movies and that everyone is expecting to die wouldn’t have that much of an impact. But the death of Iron Man? That would surprise readers, resonate with more viewers, and be an over-all shocking event with unknown consequences.

As exciting as it is that Marvel Studios is taking on a project of this caliber, it’s important to remember that there are obstacles for Marvel to over come. How it lets those obstacles affect it is what really matters; will it allow itself to be impeded and struggle onward, or will it take advantage of the situation and make creative, new, and bold choices? While only so many questions can be answered with the information that’s out there at this time, it’s important to remember all that Marvel Studios has done so far. Lately, it’s been doing a good job, so let’s keep our fingers crossed.