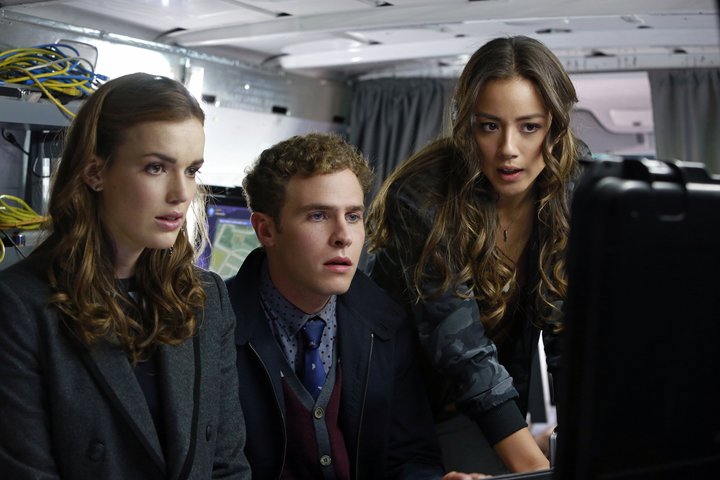 According to MTV News and Entertainment Weekly, Marvel is adding more new shows to their swelling universe. ABC has renewed Agents of S.H.I.E.L.D., which, despite its modest ratings and reviews, should surprise no one, and ABC has also green-lit the Captain America spin-off Agent Carter. The official description from ABC is: “Marvel’s Agent Carter, starring Captain America’s Hayley Atwell follows the story of Peggy Carter. It’s 1946, and peace has dealt Peggy Carter a serious blow as she finds herself marginalized when the men return home from fighting abroad. Working for the covert SSR (Strategic Scientific Reserve), Peggy must balance doing administrative work and going on secret missions for Howard Stark all while trying to navigate life as a single woman in America, in the wake of losing the love of her life — Steve Rogers. Inspired by the feature films Captain America: The First Avenger and Captain America: The Winter Soldier, along with the short Marvel One-Shot: Agent Carter. Marvel’s Agent Carter stars Hayley Atwell as Agent Peggy Carter. Executive producers are Michele Fazekas & Tara Butters, Steve McFeely & Christopher Marcus, and Jeph Loeb.”

With new shows in the works for Netflix, plus a slew of films planned through 2028 (at which point Robert Downey Jr. will be 63), Marvel’s inflationary epoch is startling to resemble the galaxy-eating Galactus.

The ever-expanding Marvel Universe is, in a way, keeping in spirit with the comics, which began as a series of fairly linear, individual stories that occasionally crossed paths, and gradually intertwined and interwove and enmeshed until only the most ardently dedicated comic reader could discern the various universes, timelines, reboots, and dopplegangers.

Anyone who grew up in the ’90s probably began reading comics in the beginning of the end, when Peter Parker was replaced by a clone, and superheroes were getting killed left and right. DC became noticeably darker after Frank Miller and Alan Moore turned the superhero into neo-fascist vigilantes in the Reagan Era, and Marvel responded by splaying its narratives in so many directions that the first 121 issues of The Amazing Spider-Man, which cover over a decade of comics, seems almost quaintly simple by comparison. 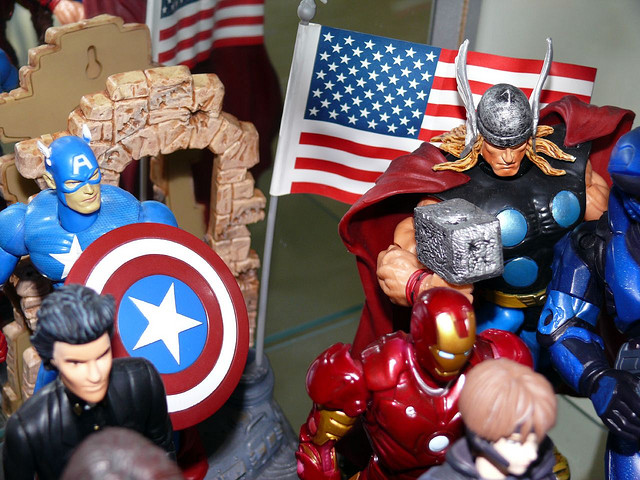 The difference between the comics and the films is that comics are considered niche — maybe less so today, where nothing is really obscure or niche anymore, but they’re certainly less mainstream than the billion dollar-making Avengers film. The Marvel Cinematic Universe is at once becoming a self-contained monster that offers little leeway with newcomers while being the second highest grossing film franchise ever, behind Harry Potter. (8 Harry Potter films came out over ten years, whereas Marvel will have 13 films in 8 years by 2016.)

Those who are already initiated into the Marvel multi-verse more than likely already know the deal — they’ve seen all the films,  episodes, webisodes, and one-shots and read the various comics that tie-in and out, enfolding the different phases of the Marvel movies. Marvel has essentially created a monolithic franchise within a franchise, glazing all of its Marvel films in a singular house style that simultaneously creates a sense of unity — much like Steve Ditko’s plain art style lent a sense of familiarity to all of the silver age Marvel comics — while sadly sapping the creative energy from the film or show. Pick an episode of Agents of S.H.I.E.L.D., any episode, and notice the complete lack of style or adornments, compared to, say, Sam Raimi’s trilogy, still the best superhero series — rendering the franchise undesirable for cinephiles.

The Winter Solider has been the exception this year, with its Three Days of the Condor plot and emphasis on practical effects and stunts, but even that was stifled by its duties to the franchise. But Marvel doesn’t care. It has its target audience already ensnared. Why should they?

The benefits of a vast but singular inter- and intra-connected universe far outweigh the cons for Marvel, but the cons are still there. Yeah, those who have been keeping up with the movies/shows/comics/one-shots will feel like they’re reuniting with family every few months when another film drops. The problem with this is how difficult it is to get acquainted with the universe if you’re late to the party. With every new films and new TV show, that’s another important bloc of names, faces, inside jokes, and ephemeral side stories that a newbie has to quickly absorb and cogitate.

Marvel’s not the only one with new franchise content hitting the small screen. Take a look below at our earlier article on Fox’s upcoming show, Gotham, based on characters from the DC universe.

Everyone’s favorite Gotham hero is back and should be coming to the small screen within the next year. That’s right, Jim Gordon has returned. Fox recently premiered the trailer for the upcoming show, titled Gotham, that will follow a young Detective Gordon as well as a number of other recognizable characters from the Batman world — though they may be recognizable by name only.

Citing a Warner Bros. spokesperson, Bloomberg Businessweek reported that the show will air during the 2014-15 season. Though further details about the show haven’t been provided by Fox, such as what month or time of day the show will begin airing, the trailer does paint a picture of what the fictional city of Gotham will be like and shows a lot of the people we can expect to see in the show.

Okay, so maybe Jim Gordon isn’t everyone’s favorite character, but any fan of the canon of Batman will likely have a deep respect for the character. This is especially true of any that read Frank Miller’s Batman: Year One graphic novel that detailed not only the rise of a youthful Bruce Wayne into a competent Batman, but also Gordon as he begins his career in the corrupt Gotham City Police Department and rises up through the ranks.

The new show will likely work with the same internal power struggle between the good and the corrupt, as the trailer appeared to show a less-than-savory Harvey Bullock as Gordon’s partner and a potential for Commissioner Loeb. It’s also clear the show wants to deal with the origins of the comic’s most notorious villains like Penguin, Catwoman, Riddler, and Poison Ivy all appearing in younger form in the trailer. But how good of a job can the show do?

The show doesn’t lack acting talent. The OC’s Ben McKenzie will be starring as Jim Gordon. He’s recently had success in the well-received cop drama Southland, which surely helped him boost his police acting chops. From a pool of 16,830 users, IMDB has Southland scoring an 8.4 points rating out of 10, so McKenzie won’t likely be putting Gotham in danger.

Bruno Heller is on as the writer for the series. The Mentalist was also written by Heller and hasn’t been slammed by awful reviews, though it does risk cancellation, and another of his shows, Rome, also proved well-received. The show is also set to be directed by Danny Cannon, who has a strong background in police TV shows, with CSI: Miami, CSI: Crime Scene Investigations, and Dark Blue behind his back. On top of that, he had experience directing spy drama Nikita and over-the-top justice in the 1995 version of Judge Dredd, according to IMDB. Veteran actors Donal Logue and Jada Pinkett Smith will both be starring opposite McKenzie as Bullock and a new villain named Fish Mooney, respectively.

Though Christopher Nolan proved that people love to get into Gotham, the upcoming show will undoubtedly be very different from the movie universe, so it won’t necessarily be able to bank on winning over that audience, nor can it count on the comic book audience to adore it unconditionally. There’s a lot that could stand in the shows way — such as Gordon’s apparent lack of glasses in the trailer.

Lack of faith to the comics is on sure-fire way to upset comic fans. Though adaptations try to re-do some bits of the stories or create new ones using the characters, straying too far from the beloved narratives and characters can be a dangerous path. This is especially true of origin stories, as it can completely recast the characters people know and love, or know and hate.

Jim Gordon lacking glasses may not be much of a miss by the show, as he’s still very young, and the creators can easily dismiss it as being before he started needing glasses. However, the introduction of some villains gone amiss might be the first feathers to land on the camel’s back. As mentioned earlier, the trailer shows off a young Catwoman, Poison Ivy, and Penguin, but something might not seem right.

Firstly, Penguin — or Oswald Cobblepot — doesn’t appear to be the squat, pudgy man that he usually appears to be. Rather, he is taller, thin, and has only a particularly pointy nose to distinguish him. The shows approach to a young Selina Kyle, better known as Catwoman, might be approved of by fans, as could Edward Nigma, or Riddler. But the Poison Ivy adaption is sure to garner frowns, as IMDB has the character’s name listed as Ivy Pepper, straying far from the Pamela Lillian Isley that grew up far, far from Gotham in Seattle, Washington.

Winning over fans might be hard, but the CW managed it with the less-popular Green Arrow in Arrow, so Fox may be able to bank on the might of the Batman franchise, even if Batman himself is wholly absent.

See the trailer below.