Matt Damon: The Best Cameos He Has Made Over The Years

Following a week of political upheaval, the cast of Saturday Night Live did what they do best: Parodied the life out of it. The sketch show returned from summer break with a cold open mirroring the Brett Kavanaugh hearings. But no regular cast member portrayed the Supreme Court nominee. Instead, viewers were treated to a surprise cameo by Oscar-winner Matt Damon.

SNL faithful know this isn’t the first time a big celebrity has guest-starred in one of the show’s political sketches. Alec Baldwin started playing Donald Trump prior to the 2016 election. Cast alum Bill Hader popped into the summer edition of “Weekend Update” to play Anthony Scaramucci. And actress Melissa McCartney slayed audiences with her impression of Sean Spicer.

There’s no doubt Damon’s turn as Kavanaugh will have people talking right up until next week’s episode. But this is far from the only notable cameo the Good Will Hunting star has made over his successful career.

That time Matt Damon was in ‘Thor: Ragnarok’

One of the things that makes Matt Damon’s cameos so memorable is that many of them — like his recent stint on SNL — come as a pleasant surprise. And audiences were definitely surprised when he appeared on the big screen as an actor trying to play Loki in Thor: Ragnorak.

As Damon later explained, the surprise cameo was an opportunity he just couldn’t pass up. “Chris (Hemsworth) just called me up, and Taika (Waititi) called me up, and I’m friends with those guys,” Damon told Collider. “They pitched me the idea and I just thought it was hysterical, the idea of basically an intergalactic community theater actor kind of living out Tom Hiddleston’s character’s fantasy.”

That time Matt Damon was in ‘Eurotrip’

Of course, you can’t talk about Matt Damon’s cameos without talking about his epic turn as a girlfriend-stealing punk rocker in the 2004 teen flick Eurotrip. What made the brief cameo so surprising was that Damon was in the early stages of supreme movie stardom, with the Ocean’s 11 and Bourne movie series in full swing. Making this comical cameo showed audiences Damon isn’t just versatile, but also isn’t above poking fun at himself. Speaking of which …

The many times Matt Damon played himself 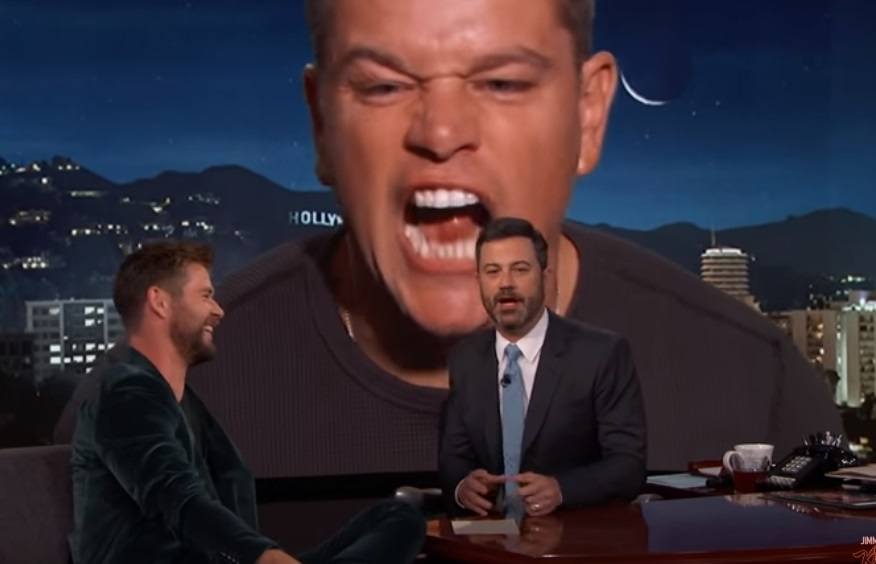 When it comes to Matt Damon’s numerous cameos, he is probably best known for the outlandish portrayals he makes of… well, himself.

One of Damon’s earliest cameos was in Jay and Silent Bob Strike Back when he and pal Ben Affleck play themselves trying to star in a Good Will Hunting sequel. The appearance is short-lived but includes Damon wielding a shotgun, which is reason enough for this performance to stick out. He then went on to make a surprise guest appearance in the season 6 finale of Entourage, joining a long list of A-list celebrities to portray themselves on the show.

But there is perhaps no greater, or more frequent, cameo appearance like the one Damon makes on Jimmy Kimmel Live! What started as a nightly gag poking fun at the Bourne Identity star organically evolved into a fake feud between Damon and Kimmel which has carried on for over a decade. The faux-feud resulted in Sarah Silverman’s viral video “I’m F–king Matt Damon” and Kimmel’s revenge take on inserting his co-host Guillermo into one of the Bourne movies. Damon even shows up to interrupt other stars’ appearances on the show, like when he snuck on-stage with Affleck or popped into the background to interrupt Chris Hemsworth’s interview. While audiences are obviously in on the joke and can tell the feud isn’t real, they still seem to get a kick out of Damon’s regular cameos on the show.