Ever since Meghan Markle first stepped out with Prince Harry, she was deemed a style icon. The Duchess of Sussex stuns literally every time she appears in public — and her royal tour of Australia and Fiji has been no exception. From her most casual looks to her evening wear, she’s proven just how seriously she’s taking her royal fashion.

Here are Markle’s best outfits from her royal tour, leading up our favorite fashion moment from the duchess so far.

Honestly, we’re already planning to steal this look from Markle for next summer. She looks like beachy perfection in this piece (which even features a thigh slit!). She wore this Reformation dress on a trip to Fraser Island, and paired the look with Sarah Flint gladiator sandals and Karen Walker cat-eye sunnies.

If you feel like you need a boost to your mood, look no further than this bright, floral wrap dress Markle wore on the royal tour. The cheerfulness of the ensemble lifts our spirits instantly, and we’re loving the pom-pom details, Castañer espadrilles, and straw clutch.

Markle loves wearing black, but this all-black ensemble really kicked it up a notch. She wore this look while opening a World War II memorial in Sydney. We love how she gave this button-down Emilia Wickstead dress the royal treatment by adding a black fascinator, Kayu clutch, and Tabitha Simmons heels. 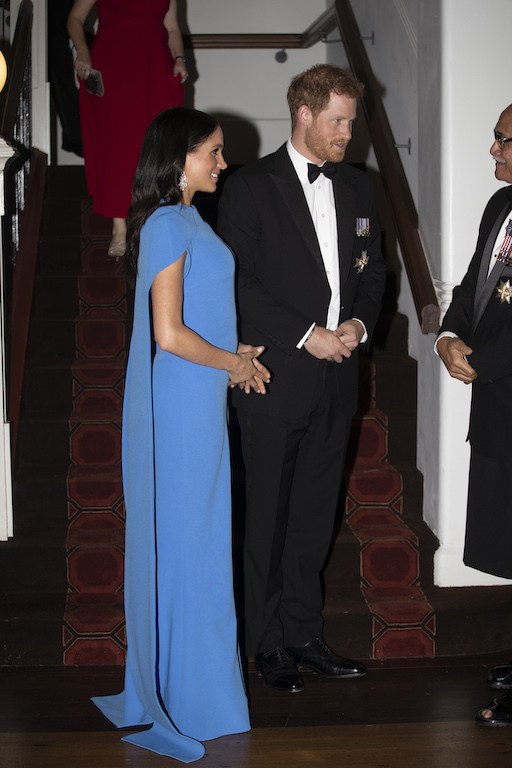 Now that Markle’s pregnancy is out in the open, she’s free to accentuate her baby bump as she pleases. But in this blue Safiyaa gown she wore to a state dinner, she did so in the most glamorous way possible. You can even get this Ginkgo cape dress for yourself — if you’re willing to shell out over $1,400 for it.

Blazers may serve as a timeless fashion staple, but Markle made us fall in love with them all over again in this look. At a reception hosted by the Prime Minister of Australia, she flawlessly paired this L’Agence blazer with a black turtleneck, black jeans, and black Aquazzura pumps.

We can’t get over how perfectly Markle mixed in beachy looks and classy ensembles throughout her trip. Even though she’s gone with beachy stripes multiple times, each outfit is uniquely gorgeous on its own. Markle’s olive striped dress was designed by Martin Grant, and she paired it with black espadrilles and a ponytail.

If we’re being honest, we aren’t sure we’ve ever seen Markle look more gorgeous. She truly had a Cinderella moment in this showstopping bird gown by Oscar de la Renta. She wore this teal-length piece to the Australian Geographic Society Awards — and it’s safe to say all eyes were on her.