Like many of us non-royals, Meghan Markle is a big fan of indulgent foods. And while most days she tries to stick to a relatively healthy (though she is said to have a hard time denying french fries — same Meg, same!) diet, the duchess and home cook loves herself a big bowl of mac and cheese. Find out Meghan Markle’s mac and cheese recipe, plus other foods she can’t get enough of, ahead. 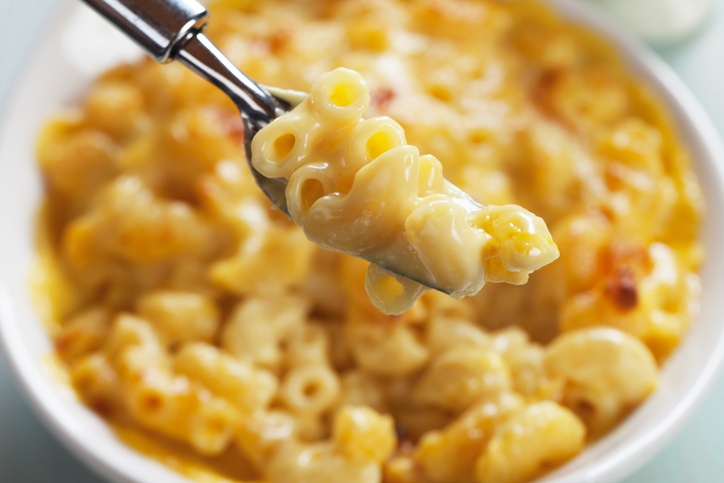 Mac and cheese is a staple in most American homes. And, Meghan Markle is one of the many that claim it as a favorite food. But, Meghan Markle’s mac and cheese recipe is not what you’d expect — especially since the duchess loves to cook. Instead of making a pot of fresh, gooey macaroni and cheese, she prefers the boxed version. “I now buy the Annie’s organic one if I’m craving it, but I throw some frozen peas into it and have this gooey simple childlike meal,” the former actress once told Eyeswoon. “I used to cook it for the kids I would babysit and I always enjoyed feeling like a kid and eating it with them,” she added.

As a self-proclaimed foodie, Meghan Markle’s favorite foods vary. Up ahead, we take a look at some of the dishes the Duchess of Sussex once shared pre-royal life.

Like many of us, Meghan Markle loves french fries — though she likely calls them “chips” now that she’s British. During her life as an actress, the duchess shared her passion for the fried food with various outlets, including Eyeswoon.

Meghan Markle is a big fan of potatoes. Case in point: Another one of her favorite foods is tater tots. The duchess apparently eats them with ketchup and sriracha.

Unfortunately, Meghan Markle has to lay off one of her favorite foods until after baby. The duchess and California native allegedly loves sushi. In fact, one of her favorite sushi spots in Los Angeles is AOC & Sushi Park and Estela or Bohemian in New York City.

According to her interview with Eyeswoon, Meghan Markle’s favorite food to “make with her eyes closed” is Cacio and Pepe pasta.

Meghan Markle’s favorite breakfast dish is not that far off from her Los Angeles roots. The duchess is allegedly a big fan of acai bowls. She even shared her go-to recipe with Eyeswoon, “blend one frozen acai packet with 1/3 cup of almond milk, 1/2 banana, a handful of frozen berries,” the former actress shared.

If she’s not having an acai bowl for breakfast, chances are the duchess is filling up on a hearty bowl of oatmeal. Meghan Markle’s go-to? Steel-cut oats with banana and agave syrup.

The duchess also adds eggs to her morning meal by way of an omelet. She allegedly prefers a French-style omelette made with cheese and fresh herbs and served with toast.