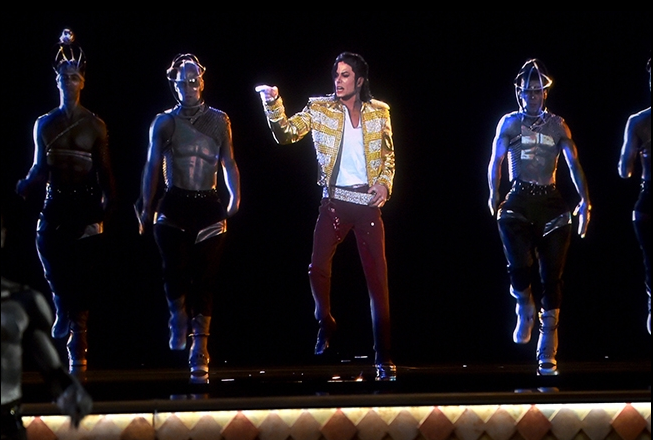 Sunday night’s Billboard Music Awards featured 19 performances from the most popular artists of the past year, but the world is mostly talking about a pop star a bit past his prime, to say the least, who made a surprise “appearance” at the ceremony.

The late king of pop, Michael Jackson, “performed” a song from his recently released posthumous album Xscape via a hologram that took six months’ worth of planning to create, according to Billboard magazine. The hologram received mixed reactions, as posthumous holograms tend to do, with some fans embracing the momentary suspension of disbelief and others saying it didn’t look enough like MJ or nail his signature swagger.

The Michael Jackson hologram sang alongside a five-piece band and 16 live dancers performing many of his signature dance moves. A team from Michael Jackson’s estate collaborated with the Billboard Awards producers to put together the performance, all the while working with choreographers and developing new technology for the hologram. The whole thing didn’t come together until just before the show.

The decision to do a posthumous hologram was a risky one. Previous hologram performances of dead musicians haven’t exactly been well received. Tupac’s “appearance” at Coachella in 2012 elicited more confusion than enthusiasm. Viewers of an awards show like the Billboard Music Awards don’t really want to be faced with heavy questions about things like the uncanny valley and the immortalization of dead artists via technology for profit. Rolling Stone called it “Hands down the most appalling, lamest cash-in on MJ’s legacy we’ve seen thus far.”

There were some high notes to the evening’s performances. Lorde gave the first televised performance of her new single “Tennis Courts,” proving yet again that she’s completely comfortable in her gothic weirdo skin, exhibiting a confidence beyond her years. The singer’s appearances at music awards ceremonies over the past year have always felt a little strange since she seems so out of place among her flashy, scantily clad peers, but as per usual, she killed it at Billboard, giving the best performance of the night.

Lorde was rivaled in weirdness by Miley Cyrus, who performed a surprisingly acceptable version of the Beatles’ “Lucy in the Sky With Diamonds” alongside the Flaming Lips via satellite from Manchester, England, after winning the award for Top Streaming Artist. Miley and Flaming Lips lead singer Wayne Coyne donned bizarre, trippy get-ups that seemed to be made of tinsel and managed to pull off a duet that came across as sweet and involved no twerking. It was a surprising highlight of the evening.

Another high point came from female rapper Iggy Azalea, who lent her Southern-influenced flow to Ariana Grande’s “Problems” and her own “Fancy,” featuring Charlie XCX.

The show wasn’t without its embarrassing moments. Robin Thicke is still attempting to move his career beyond the monster hit “Blurred Lines,” which gained him and collaborators Pharrell Williams and T.I. four awards. He debuted the single “Get Her Back” by performing it at the awards ceremony, introducing the song by making it even more obvious that it’s about his estranged wife Paula Patton, from whom Thicke separated in February amid rumors of his infidelity. “All right, y’all help me get her back,” he said before performing the song, airing a bit more of his dirty laundry than was perhaps tasteful for a public event.