How Old is Chicago Bears Quarterback Mitchell Trubisky, and How Big is His Contract?

Immediately after the 2017 NFL Draft, the pundits claimed the Chicago Bears trading up one spot to draft Mitchell Trubisky was one of the worst mistakes of the draft. We don’t know yet if the quarterback is one of the biggest busts of all time. We couldn’t tell you if he is one of the future NFL superstars, but we know he’s young, and he’s on the right path to eventually becoming one of the highest paid NFL players when he hit free agency. Let’s take a look at Mitchell Trubisky, including his age, how big his contract is, and how he got to the NFL.

How old is Mitchell Trubisky?

The Chicago Bears made Mitchell Trubisky a first-round pick in the NFL Draft. | Elsa/Getty Images

Mitchell Trubisky was born Aug. 20, 1994, so he was just 23 years old as a rookie in 2017 and 24 when the 2018 NFL season started. He was drafted by and plays for the Chicago Bears, a franchise with a history of bad quarterback play, but he grew up watching another team with QB issues.

As a native of Mentor, Ohio, which sits on Lake Erie northeast of Cleveland, Trubisky probably knows a thing or two about bad quarterbacking. He surely knows one or two of the terrible Cleveland Browns quarterbacks the team has had since is re-entered the NFL in 1999.

He went from Mentor High School to the University of North Carolina before coming to the NFL.

Why did experts think drafting him so high was a mistake?

The Bears were desperate for a quarterback when the 2017 NFL Draft began. When the average but overpaid Jay Cutler is one of the best QBs in franchise history, it’s not a good sign. Chicago gave away four draft picks (three in 2017 and one in 2018) to the San Francisco 49ers to move up one spot and draft Trubisky.

Mitchell Trubisky started for only one season at North Carolina. | Streeter Lecka/Getty Images

The experts said the move wasn’t a good idea. In addition to giving away a ton of assets to move up one position, the Bears drafted a player with limited experience who started just one season in college. He played well during that one season (he completed 68% of his passes for 3,748 yards and 30 touchdowns against only six interceptions), but he also was playing in a quarterback-friendly shotgun offense. After that strong junior season, Trubisky left school and took his chances on an NFL career.

However, Trubisky’s stats in 2018 show he’s one of the best quarterbacks in the NFL. Through 10 games in 2018, he’s in the top half of the league in passing yards and top 10 in touchdowns, according to Pro Football Reference.

What is Mitchell Trubisky’s salary? 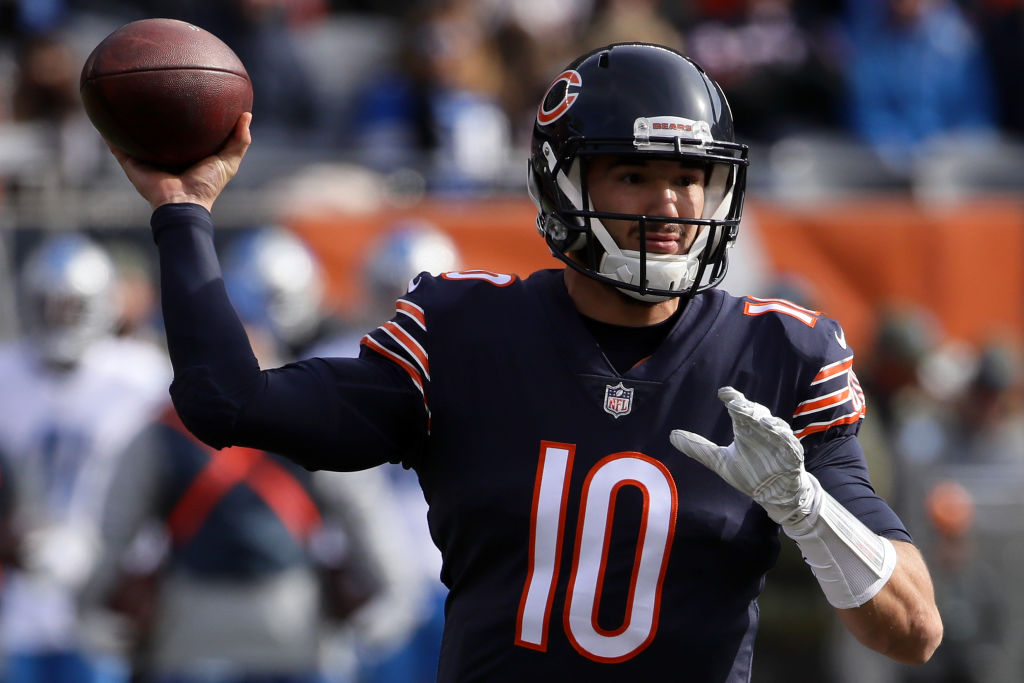 Even with his rookie contract, Mitchell Trubisky is still making a lot of money. | Jonathan Daniel/Getty Images

Despite his lack of experience before entering the league, Mitchell Trubisky has a very lucrative contract that gives him a multi-million dollar net worth.

Even though NFL rookies have salaries tied to a rookie wage scale, Trubisky stands to earn more than $29 million from his first contract, which is fully guaranteed. He’ll never earn more than $1 million in base salary, but he’ll be earning an equal portion of his $19.2 million signing bonus every year through 2020, according to Spotrac.