‘Mockingjay — Part 2′ Review: Is This Movie Worth Watching? 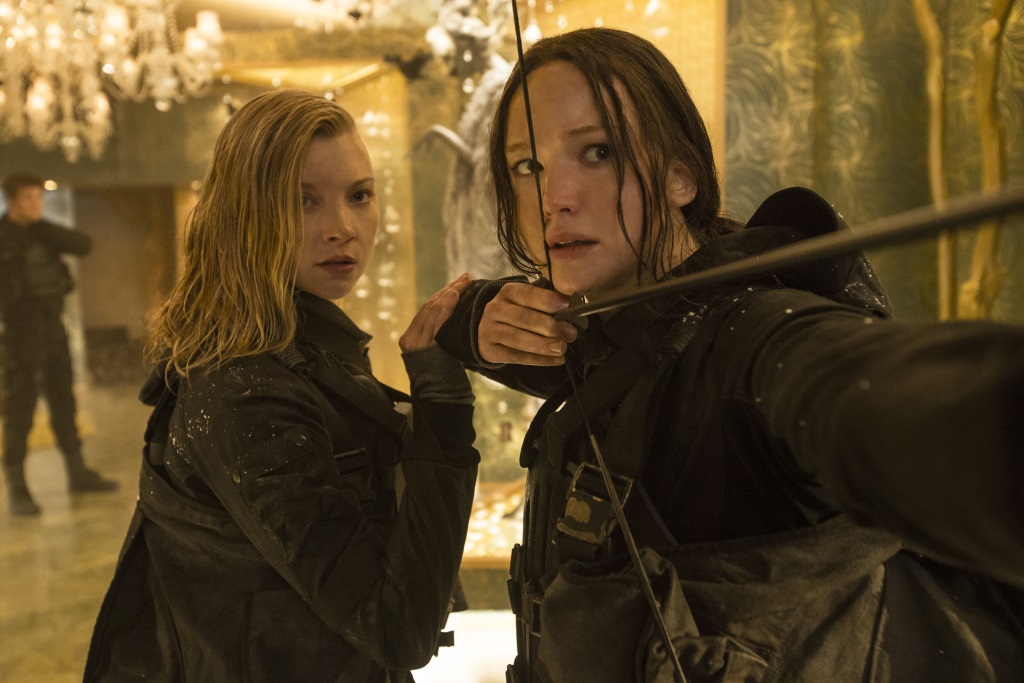 Let’s begin by saying this: The Hunger Games: Mockingjay — Part 2 is a better quality film than Part 1. In this last installment, the franchise comes to an abrupt end — although the film is 137 minutes long. It also offers a horribly romanticized ending (the final scene, that is), but we won’t give that away.

When finally the resistance troops infiltrate the abhorred Capitol, it is already a war-torn mess. Katniss Everdeen (Jennifer Lawrence) and her new “unit” simply help clean up the debris.

Consensus wise, it’s easy to see that Part 2, like 1, is a potboiler film, out to snatch up every penny the YA fan base has to offer before it slips into the Lionsgate vaults. And sure, it could be said that the film has a myriad of faults: a jumpy story, too much exposition plugged into the first part, too little coherence in Part 2, and questionable moments of characterization, a dragged out soap-opera-esque love triangle between Katniss, Peeta (Josh Hutcherson), and Gale (Liam Hemsworth). But then again, there are positive moments as well: enchanting mise en scène in frames that juxtapose the future with the past, top notch costumes that rival, and outdo, its YA competitors, a forceful lead from Lawrence, and a heck of an odyssey that the core characters embark on.

What’s more, you have the moralistic themes that come to the forefront (and in Part 2 are literally addressed by Woody Harrelson and Philip Seymour Hoffman’s characters) about warfare, revolution, relationships, and even sadism/dogmatism. And Director Francis Lawrence does all of this without much hair-raising violence — for it is PG-13. So, there is the rich scenery, a whole lot of gunfire, mutants, a maze of oil, and the continuation of the arcs of a few characters fans have grown to like. These are, Katniss, Haymitch Abernathy (Harrelson), Effie Trinket (Elizabeth Banks), Finnick Odair (Sam Claflin), and Cressida (Natalie Dormer).

The gang’s all here. It is true. But each character does seem sort of lifeless and two-dimensional. They’re only plastered on the screen to augment Katniss’s story, which is all well and fine. However, there are some truly A-list actors who get overlooked. Donald Sutherland may be our only exception, for the 80-year-old makes a pleasant antagonist. Still, there are actors like Elizabeth Banks, Woody Harrelson, Julianne Moore (as President Alma Coin), and Stanley Tucci (as Caesar Flickerman) who are really just background noise. It seems that when they boarded the YA train for the first film (2012), the future was bright; now, it could be said, the genre (or at least this franchise) has truly reached its final stop.

The reservations seem to keep piling up, but all things considered, Mockingjay — Part 2 is not a bad film. Is it rough around the edges? Sure, but the swift editing and careful attention to detail on set account for a lot. 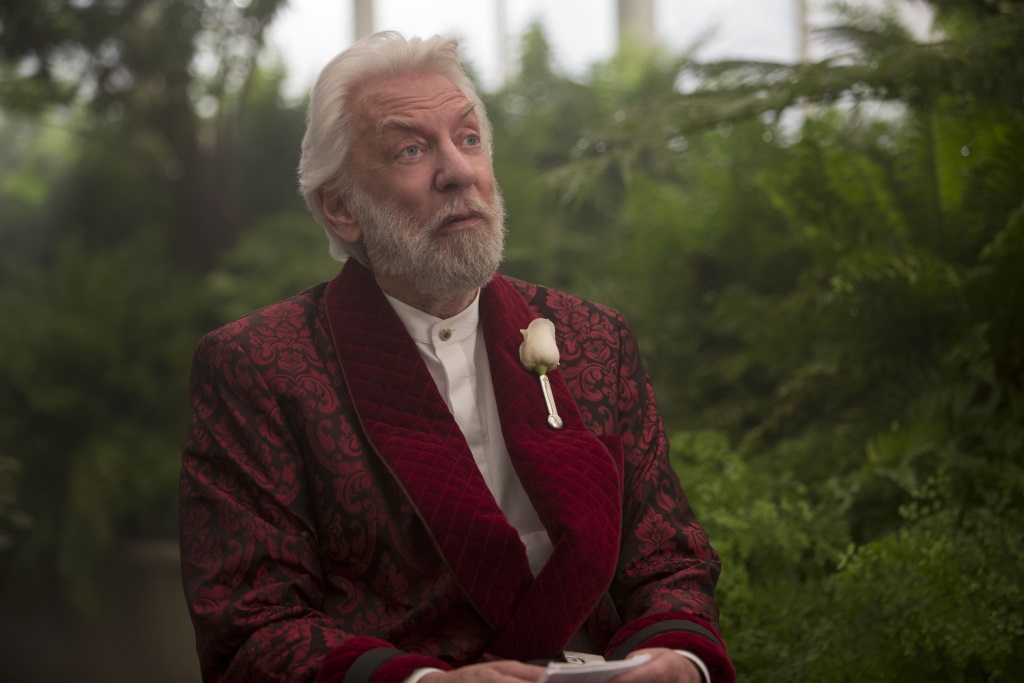 This brings us to another Hunger Games related anecdote; and that is the arc, or larger story of Plutarch Heavensbee, played by Philip Seymour Hoffman, who was one of the better character actors of the past 20 years. Hoffman passed away in February 2014, while Part 2 was still being filmed. Yes, it was quite a long time ago, and fans were able to “say goodbye” when Heavensbee appeared in Part 1. But in Part 2, when he is noticeably absent from the story, it’s easy to see that his absence becomes a large story gap. His scenes are visibly lessened, and what viewers do see or hear from him is largely epistolary. Granted, Director Lawrence had to work through a lot in Part 2, but Heavensbee’s absence is more of a sad point than weakness. Still, it is there.

As fans are forced to say goodbye to the Hunger Games franchise, at least they can say that the series went out with a bang, in what — in effect — became the 76th Hunger Games. That’s because, the Capitol is rigged to become another playground for the game-makers and the peacekeepers of Panem. Katniss’s unit is forced to meet these obstacles on every front, and for the most part, it’s a compelling journey. Fans just may be wishing for more time — to see the eminent collapse of the once-burgeoning, baroque city (although there is over two hours of running time to handle; it’s a strange dilemma for sure).

Shall we discuss specific plot now?

Part 2 begins as Katniss recovers from Peeta’s vicious attack at the end of Part 1, after he is brainwashed by Snow and his ornately-dressed cronies. At which point, she meets Heavensbee, who makes it known that the rebel offensive is closing in on District 2, where “loyalist” fighters are holed up in a mine safe house carved into a mountain. It is President Alma Coin’s intention to destroy the place — and Gale Hawthorne (Hemsworth) is in agreement. From there she’ll move to the Capitol.

Katniss does not want to see innocent people, civilians, die in this mine fort, so she convinces Coin to keep the railway open for civilians to escape. Katniss is then sent to the ashen remnants of this fort to address the people of Panem. Katniss, in her ever-deepening role as figurehead for Coin, is asked to rile up the troops while Coin moves in and handles business. Eventually, Katniss decides to “go rogue” and head to the front lines. Here, she meets up with rebel fighters, but Coin catches up and attaches her to a new unit set to shoot promo videos for the rebellion. She will stay behind the front lines (with other “figureheads,” like Peeta, Gale, and Finnick) and shoot-down rigged killing machines (the Capitol’s playthings) and make it seem like she’s heading the offensive.

Accompanied by Cressida (Dormer) and the group from Part 1, Katniss decides to take matters into her own hands. Will she be able to advance through the war-torn Capitol, which looks much like Berlin circa 1945? Will she be able to fend off the odd, psychotic flare-ups that Peeta goes through? Will she choose him or the more rugged Gale? How will President Coin react to Katniss’s star power? Can there be a free Panem?

The film, which uses Suzanne Collins’s novel Mockingjay, and whose screenplay was written by Peter Craig, Danny Strong, and Collins, is a mostly agreeable end to a frenetic series. In a micro sense, the film has flaws, but on the more global side of things, it’s still fun to watch and appreciate the richness of it, the inventiveness.

Films of the dystopian YA sort were tons of fun when they first emerged — with Twilight, Maze Runner, and the earlier Hunger Games films. Since then, the studios seem to have been playing up on this fad, much like the super hero craze. Nonetheless, it is hard to see “YA dystopia” pushing on much further past Katniss; and Director Lawrence will be lucky to garner a fraction of the attention that Gary Ross received for the first film in 2012.

On production values, though, Part 2 is definitely competent. There is some heart-pounding music from James Newton Howard, and D.P. Jo Willems really carries the films at times. Basically, it is (was?) always fun to see what sort of obstacle the gamekeepers can throw Katniss’s way. In Part 2, there is no lack of this (pleasant) tomfoolery. And as a viewer, you may have a grand vision of the Capitol, and its capabilities; but is it almost more engaging to see it in its war-torn state? Now that’s for you to decide.

As they say, to the victor go the spoils. And, may the odds be ever in your favor…

Be sure to catch The Hunger Games: Mockingjay — Part 2 in a theater near you.