Monty Python May Be Ending, But Fans Aren’t Done Yet 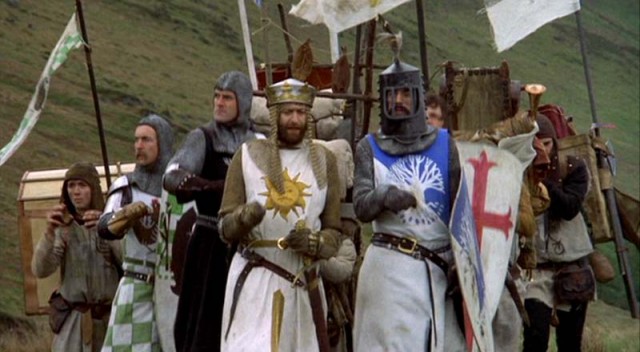 The five remaining members of Monty Python will be performing their last live reunion show at London’s 02 Arena later this summer. Eric Idle, John Cleese, Terry Gilliam, Terry Jones and Michael Palin — who haven’t given a performance together on stage since 1980 — confirmed on Monday that the July 20 date of their 10-show farewell run at the venue will be their chance to “say goodbye publicly” to their fans.

The live shows reportedly feature the classic Python sketches that fans know well and still love, such as the Spanish Inquisition, the dead parrot routine, and select scenes from their 1983 film The Meaning of Life. In addition to the comedy sketches, the over $7.5 million production also includes an orchestra, songs from their past projects, and yes, plenty of dancing girls in skimpy lingerie and underwear. The final show in July will be broadcast on cable in the UK and played in movie theaters in the states and around the world.

Though the sixth Python member Graham Chapman died in 1989, audience members can still expect to see him in the show through film footage. British theoretical physicist Stephen Hawking will also reportedly make a cameo in the theatrical production.

The Pythons didn’t need to worry about how to promote their reunion. In fact, they knew just who to call for help. In a hilarious video introduction to the live show that is making its rounds online, Rolling Stones’ Mick Jagger pokes fun at the comedy troupe and by extension, his own band, calling the group “a bunch of wrinkly old men trying to relive their youth and make a load of money” and claiming “the best one died years ago!”

But Jagger’s not the only one who’s eager to see their live show. The Pythons’ first gig at London’s 02 Arena reportedly sold out in under a minute. Based off those sales, their final July show, which will mark their first and last live TV performance and be released in Blu-ray in November, surely won’t have a lack of an audience either.

But while that performance will give longtime fans a final chance to watch and laugh at the group’s most famous sketches, it definitely won’t be the last you see of them individually. Williams reportedly just directed an opera and a film called The Zero Theorem, Jones is planning to film a movie based on The Nutcracker in Toronto, and the others continue to pursue their own projects as well. Whatever they go on do, it’s a pretty safe bet that their devoted fan base will continue follow them. If there’s one thing this live show tour proves is that if there’s a Python, there’s a way.