The 10 Most Anticipated Netflix Premieres of 2017

In just a few years, Netflix has managed to become one of the best networks out there for original movies and TV. Last year, they delivered an unprecedented number of new shows and movies to subscribers, and offered up some of the most talked about programs of the year.

Likewise, 2017 is shaping up to be an exciting year. We’ll see highly-anticipated follow-up seasons to shows like Orange Is the New Black and Master of None, and a slate of new series and feature-length films from some big names. Here are the 10 Netflix premieres to watch out for in 2017.

1. A Series of Unfortunate Events

A Series of Unfortunate Events | Netflix

It’s a beloved book series that didn’t quite get the original adaptation it deserved. In 2004, Lemony Snicket’s A Series of Unfortunate Events hit theaters, starring Jim Carrey. The film told the story of the Baudelaire orphans and their lives with their devious relative, Count Olaf. It was a box office success and fared well with critics, but it sadly never received a sequel. Netflix picked up Snicket’s dark fantasy, though, and has produced eight episodes that will dive deeper into readers’ favorite stories.

A Series of Unfortunate Events stars Neil Patrick Harris as Count Olaf, Joan Cusack as Justice Strauss, Malina Weissman as child inventor Violet Baudelaire, and Patrick Warburton as Lemony Snicket, the narrator. The first season of the series premieres on Netflix on January 13.

Stranger Things was, without question, one of the most unexpected breakthrough hits of 2016. The sci-fi series, about otherworldly occurrences in a small Indiana town, enthralled audiences and made us all feel just a little bit nostalgic for the 1980s.

Netflix announced last fall that it had commissioned a second season of the Duffer Brothers’ series. So far, we don’t know much about the next installment of Stranger Things — a teaser trailer revealed the chapter titles, and there have been a few casting announcements. We also know that most of Season 1’s cast will return, including Millie Bobby Brown’s Eleven. Will Byers (Noah Schnapp) will play a bigger role and we’ll learn more about the side effects of his time in the Upside Down. What we don’t know (yet) is the exact date that Season 2 will premiere.

Netflix has already established a pretty great relationship with Marvel. Daredevil, Jessica Jones, and Luke Cage have all been big hits for the network. Netflix in turn, has proven it has what it takes to bring the comic book franchise’s stories to life in innovative and exciting ways. In 2017, we’ll see a few different Marvel Cinematic Universe projects hit Netflix, the first of which is Iron Fist. The series stars Finn Jones as Danny Rand, a billionaire and kung fu master with a particularly awesome superpower — the ability to call on and use the Iron Fist. Marvel originally intended to turn the story into a film, but instead chose to develop the story for the small-screens.

Thus far, Netflix has definitely been known more for its original TV than for its movies. That could change in a big way in 2017, thanks in part to Okja. It’s a monster movie about a girl named Mija (Ahn Seo-hyun), who will stop at nothing to protect her titular, and monstrous, best friend from a powerful corporation.

Okja is directed and co-written by Bong Joon-ho, the South Korean filmmaker behind Snowpiercer and The Host. If that’s not enough to get sci-fi and horror fans to tune in, the film’s awesome cast should do the trick. It stars Tilda Swinton, Jake Gyllenhaal, Paul Dano, Breaking Bad‘s Giancarlo Esposito, and The Walking Dead‘s Steven Yeun. There’s no word yet on exactly when Okja will hit Netflix, but it’s due to arrive before the end of the year. 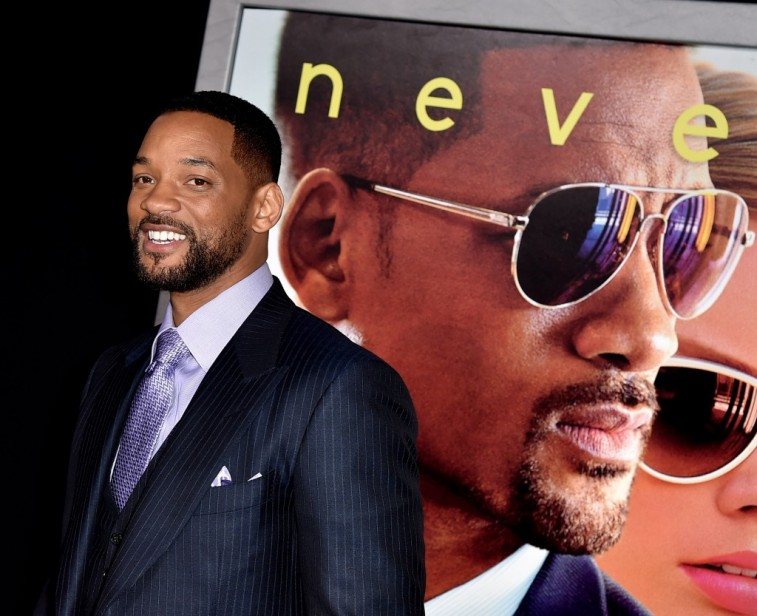 When Netflix first started creating original content many people were shocked that prominent actors like Kevin Spacey and Robin Wright would sign up to work with a streaming service. These days, A-listers are lining up to get a project off the ground with the network.

One such star is Will Smith, who will team up again with Suicide Squad director David Ayer for this year’s Bright. The plot of this sci-fi crime drama is being kept under wraps, but the buzz around it is already pretty high. That could be because the film has also nabbed Joel Edgerton and Prometheus‘ Noomi Rapace. Or it could be because Netflix liked the concept so much, they were willing to pay $90 million to co-produce the film. Either way, it’s easily one of the coolest projects that Netflix has lined up for 2017.

Brad Pitt has a long history of making some pretty amazing films. So when his production company, Plan B, sold the distribution rights for War Machine to Netflix for $60 million, Hollywood took notice.

The film, a satire about the United States’ involvement in the war in Afghanistan, stars Pitt as General Dan McMahon, and features a large ensemble of actors including Ben Kingsley, Anthony Michael Hall, Alan Ruck, and Tilda Swinton. The film was originally slated for release in 2016, but Netflix pushed it back — perhaps to avoid competing for attention with Pitt’s other recent war film, Allied. While there’s no official release date for War Machine, it’s due some time this year, and will likely be one of the network’s most high profile projects yet.

What’s better than a Netflix series starring a Marvel superhero? One starring four, obviously. That’s exactly what we’ll be getting this year when The Defenders lands on the streaming site. It will feature Jessica Jones, Luke Cage, Daredevil, and Iron Fist — all of whom have their very own shows on the network — and follow them as they team up to prevent some serious evil from destroying New York City.

It’s an ambitious project for Netflix, but one that should pay off, as three of the four main characters have already proven to be huge draws for subscribers. The Defenders‘ first season will run eight episodes, and will also feature appearances by many other Netflix MCU standouts, including Deborah Ann-Woll as Karen Page, Scott Glenn as Stick, Elodie Yung as Elektra, and Carrie-Anne Moss as Jeryn Hogarth.

The Walking Dead made it cool for zombies to be on TV, and Netflix is taking that trend one step further with Santa Clarita Diet. The dark comedy series, starring Drew Barrymore and Timothy Olyphant, follows a woman who develops an appetite for humans after she dies in the first episode.

It sounds twisted, sure — but that’s hardly uncommon or uncouth these days. Netflix has proven on multiple occasions that it’s not afraid of controversial or twisted content, so this cannibal-themed comedy should be right at home in their line-up. Plus, with Barrymore’s irreverent star power, the series could easily be an unexpected hit for the network. Santa Clarita Diet also stars Nathan Fillion and Liv Hewson. The first season will hit Netflix in its entirety on February 3.

If you like your comic book characters with a side of unquenchable vigilante justice, then Netflix’s The Punisher, should be right up your ally. The series stars Jon Bernthal as the titular antihero Frank Castle, and was originally conceived after his wildly popular turn in Season 2 of Daredevil.

Though details as to the series’ plot are sketchy, we do know that Ben Barnes will co-star as Billy Russo, Castle’s best friend, and that it will be much more in line with Marvel’s original vision for the Punisher than the 2004 feature film starring Thomas Jane. The Punisher will also star Deborah Ann Woll, Ebon Moss-Bachrach, Amber Rose Revah, and Daniel Webber. The first season will likely be released in late 2017.

At first blush, a series set in 19th century Canada doesn’t sound like it would be all that thrilling. But given the fact that Frontier stars Game of Thrones vet-turned-Aquaman, Jason Momoa, it sounds like it could actually be one of the most exciting TV shows of 2017. The series follows warring factions of fur traders in an uncertain terrain, and by all accounts looks to offer plenty of action and drama. It also stars Alun Armstrong, Allan Hawco, Landon Liboiron, and Jessica Matten. Frontier has already aired in Canada, but will premiere on Netflix on January 20.