Being asked to host or perform on SNL is an incredible honor, but not everyone who does so ends up being respectful. Over the course of the show’s long history, there have been countless examples of guests behaving so terribly that they are never asked to return.

These vary from those who were simply rude backstage to stars who said or did something horrible on the air. And Bill Hader has singled out one major pop star as being the worst host of all time (page 7).

Here’s a look at the most terribly behaved SNL hosts and performers of all time.

Paula Abdul may be known in part for judging people on American Idol, but she got bad reviews herself when she hosted SNL in 2005.

Tina Fey said two years after the fact that Abdul was “awful” and “disastrous” on the show; as one example, Fey said that they did an American Idol sketch, but Abdul kept wanting to change things, so Amy Poehler had to step in and play Abdul instead.

“A year later I saw her on a flight,” Fey said. “We both looked at each other like, ‘Do I know that girl?’ And then we both had the same moment of recognition, and she was like ‘uuuggh.’ I saw it register on her face that she had had a terrible time with us.”

Next: This performer was banned after an incredibly controversial stunt.

One of the most controversial SNL incidents of all time came when Sinead O’Connor was on in October 1992. After a performance of the song “War,” in which she changed references to racism to references to child abuse, she tore up a picture of Pope John Paul II, calling him evil and telling viewers to “fight the real enemy.”

Needless to say, nobody at SNL had any idea what she was going to do; she was supposed to hold up a picture of a starving child.

Next: It probably won’t surprise you to learn that this celebrity was a bit of a jerk backstage.

When Kanye West was the musical guest on SNL in 2016, he evidently had a complete meltdown backstage. In a tape released by Page Six, West can be heard yelling at the show’s staff. He was reportedly upset that the crew had ripped up some shiny flooring from his set because it was reflecting the stage lights.

Apparently, West threatened to walk off the show during the actual live broadcast, but Lorne Michaels had to reason with him to stay. In an interview, Jay Pharoah would later say, “I saw Kanye [West] yank somebody. That was pretty hilarious.”

Next: David Spade says that this host was really tough to work with.

During a 2015 interview, David Spade said that one of the worst SNL hosts of all time was Steven Seagal. “He was a little tough,” Spade said. “He was actually tough and he was tough to work with. It was hard. He did not want to play along.”

Apparently, Seagal didn’t have much of a sense of humor, and he would constantly berate the staff. “He didn’t realize that you can’t tell somebody they’re stupid on Wednesday and expect them to continue writing for you on Saturday,” according to the book Life From New York.

Seagal was so bad that Lorne Michaels would later call him out on the air. When Nicolas Cage hosted and said that he must be the biggest jerk to ever host SNL, Michaels said, “No, no, that would be Steven Seagal.”

Next: This musical guest was banned after he did exactly what NBC told him not to do.

It’s not often that you hear a musician yell at their band to stop playing during an SNL performance. But that’s what Elvis Costello did when he was on the show in 1977. What evidently happened is that Costello wanted to play the song “Radio Radio,” which criticizes the commercialization of rock music, but his record label didn’t want him to.

Instead, they agreed that he would play “Less Than Zero.” However, not long into his performance of that song, Costello told the band to stop, saying, “there’s no reason to do this song here.” So he just switched into “Radio Radio,” throwing off the pace of the whole show.

This stunt was enough to get Costello a ban; he would come back in 1989, though, making him one of the few people to have an SNL ban lifted.

Next: Tina Fey says that this celebrity was the worst host of all time.

Tina Fey previously complained about Paula Abdul’s time on the show, but she says that the worst host of all time was Adrien Brody. She didn’t go into detail. However, there’s not much of a mystery about why she might have named him.

While he was hosting in 2003, during the introduction of musical guest Sean Paul, Brody ran on stage wearing fake dreadlocks and speaking in a Jamaican accent. This was criticized as being racist, and Lorne Michaels obviously does not like hosts doing stunts like this without him knowing about it.

Brody was subsequently banned from SNL.

Next: Bill Hader says this was the worst host that he ever worked with.

When asked in March 2018 who the worst SNL host was during his time with the show, Bill Hader named Justin Bieber. “He just was in a bad place,” Hader said. “Maybe he’s in a better place, but then he was in a very … it was rough.”

Hader said that SNL hosts are typically on their best behavior, but “he just seemed like, exhausted or just at the end of a rope.” Jay Pharoah clearly agreed; when the question of worst host came up, Pharoah looked at Hader and said, “I mean, we both know, dog.”

Next: Tina Fey called out this guest, saying she was horrible to work with.

When Paris Hilton hosted SNL in 2005, she was apparently a nightmare to work with; we know this, once again, because of Tina Fey.

When Fey was on The Howard Stern Show in 2006, she said that Hilton was a “piece of sh-t.” Apparently, Hilton was so self-absorbed that the staff had a bet about whether she would ever ask any of them a personal question like “how are you.” She did end up asking one: she asked if Maya Rudolph was Italian.

Hilton also apparently wanted the SNL staff to write her a Jessica Simpson sketch not because it would be funny, but because “I hate her” and “she’s fat.” Fey added that Hilton actually takes herself really seriously.

Next: This band got incredibly wasted before they performed.

The Replacements were the musical guest on a 1986 episode of SNL, and the appearance turned out to be an utter disaster. According to Rolling Stone, the members of the band were drinking backstage and came on stage completely wasted.

Paul Westerberg also dropped the F-bomb live on the air, and it slipped past the censors. After the performance was over, they thought they did a pretty good job, but Lorne Michaels confronted them backstage about it, telling them they’d never perform on TV again.

Indeed, The Replacements were banned from SNL after this.

Next: This comedian’s monologue was so filthy that NBC couldn’t broadcast it again.

Back in 1994, Martin Lawrence was the host of SNL, and in his monologue, he went on an extended, graphic rant about female hygiene. He was obviously completely aware that the NBC censors wouldn’t be happy with this, telling the censors to “get off my ass.”

This monologue ended up getting Lawrence banned from SNL. In subsequent reruns of his episode, a portion of his monologue was replaced with title cards summarizing the gist of what he said and adding, “Although we at Saturday Night Live take no stand on this issue one way or the other, network policy prevents us from re-broadcasting this portion of his remarks.”

Next: Whenever this former SNL cast member returned to host, it apparently went terribly. 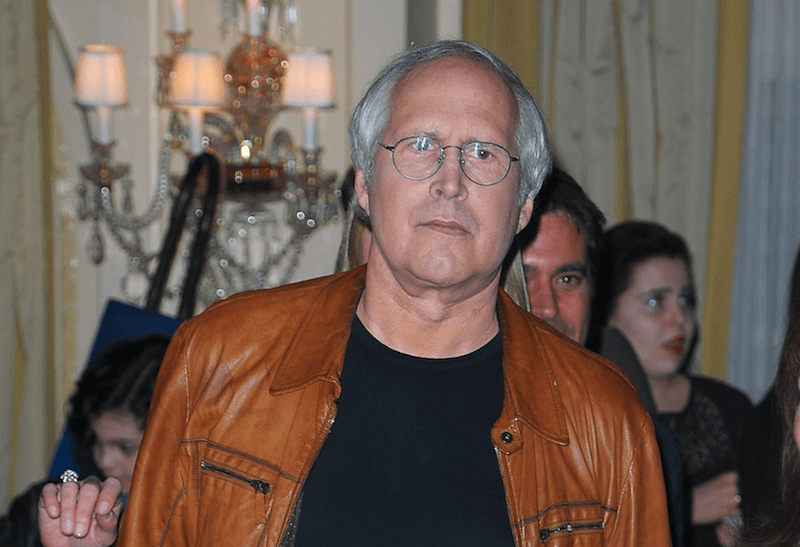 Chevy Chase may be a comedic genius, but it seems that everyone who works with the guy has a story about him acting like a jerk. Chase, of course, was a cast member during the first season of SNL.

But after leaving the show, he came back to host multiple times, and it sounds like each one was a disaster. The first time, he got into a full-on fist fight backstage with Bill Murray. Another time, he made homophobic remarks to a gay cast member.

He also hosted in 1997, by which point Will Ferrell was working on the show, and Ferrell names Chase as the worst host ever. Ferrell has speculated that Chase may have been on drugs, adding that he made graphic sexual remarks to one of the female writers. “In hindsight, I wish we’d all gotten up and walked out of the room,” Ferrell said.

Next: This musical guest did drugs live on the air.

While performing on the show in 1993, one of the members of Cypress Hill actually smoked weed on the show. Before the start of their second song, DJ Muggs said, “Yo, New York City, they said I couldn’t light my joint, you know what I’m saying? Well, we ain’t going out like that!” He proceeded to light his joint.

According to Complex, the SNL producers kept whispering into the musicians’ earpiece telling them to not light their joint on stage, but they did it anyway. Naturally, doing drugs live on the show resulted in a ban.

This was so shocking at the time that Complex later named this No. 21 on their list of the biggest hip-hop moments in pop culture history.

Next: This hilarious comedian completely bombed on SNL.

Although he was a hilarious comedian, Milton Berle’s 1979 appearance on SNL went quite poorly. According to reports, he would give directions to crew members, including people working on the lighting, and he would constantly throw in his own jokes while speaking directly into the camera.

Much worse, though, was the fact that he would apparently walk around backstage in his underwear. He ended the show with a performance of “September Song,” which he ensured would get a standing ovation by filling the audience with friends and family, something that Lorne Michaels had no idea about.

Next: This band incited a riot that caused thousands of dollars in damages.

The punk rock band Fear performed on SNL in 1981 for the Halloween episode, and they ended up inciting a riot, with people throwing themselves on stage and causing damage to equipment.

This was evidently because the band had brought in 80 of their own fans, who treated it more like a punk rock concert than a regular episode of SNL. Needless to say, the crew of the show was not happy; one of the stage managers even had a pumpkin thrown at him.

Next: Lorne Michaels was so angry at this band that he didn’t even have them perform a second song.

15. Rage Against the Machine

When Rage Against the Machine performed as the musical guest in 1996, the host that evening was presidential candidate Steve Forbes. Wanting to protest him, they hung upside down American flags from their amplifiers.

But according to Rolling Stone, seconds before they were to perform, a battle broke out between SNL stagehands and the band. The stagehands ultimately removed the American flags, and the band performed their first song without them.

After the first song, the band was asked to leave the building, and they never performed a second song, nor have they returned to SNL since.