MoviePass has officially unveiled its new peak pricing system, meaning you may soon need to pay an additional fee to see certain movies. But the launch of this system has been a bit confusing, so let’s take a look at how peak pricing works and how you can avoid the added charges.

Peak pricing is gradually rolling out as we speak, but once it reaches you, you’ll notice lightning bolts appearing next to specific showtimes in the MoviePass app. If there’s a red lightning bolt, that means peak pricing is in effect for this showing. You can still see that film at that showtime, but you’re going to be charged a fee to do so.

That fee will depend on how in demand the movie is, but it can be anywhere from $2 to $6, according to CNET. MoviePass has an algorithm to determine the exact price, so you won’t know what it’s going to be until you click on the showtime.

You may also notice, though, that some showtimes have a grey lightning bolt next to them. What this means is that MoviePass is not currently charging a fee for this showtime, but it will soon. The system can tell that the movie is increasing in demand, and at some point, that grey lightning bolt will turn red and the peak pricing will go into effect. 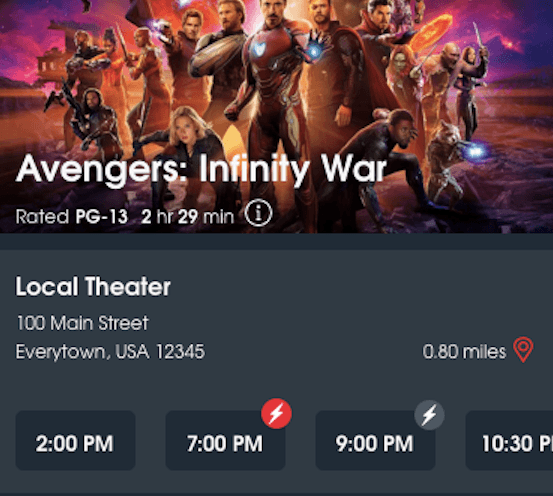 Basically, then, if you see the grey lightning bolt, you’ll want to buy your tickets as quickly as possible. As long as you buy them while the icon is still grey, you can avoid the charge. In general, once peak pricing has been rolled out, you’ll want to make a habit of buying tickets as early as you can every time.

When peak pricing was first announced, it was assumed that MoviePass would just add on the charge for all opening weekend showings of popular new movies, so you wouldn’t be able to see a film like Ant-Man and the Wasp in its first few days of release without a fee.

That isn’t how the system works, though. Instead, MoviePass makes a determination based on specific movies in specific regions. You’ll notice that in the above example provided by MoviePass, two Avengers: Infinity War showings have lightning bolts, and two don’t. So with this new system, it’s still technically possible to see a popular movie on its opening weekend without a charge, but you may have to choose a less convenient time. Then again, you also might not have to.

As you can see, the system is fairly unpredictable, and even MoviePass says on its website, “we are unable to predict exactly when a showtime will enter peak pricing.”

The good news is that MoviePass says it plans to implement something called a Peak Pass. Using this pass, you’re allowed to waive the fee one time every month. However, this hasn’t been introduced yet.

If you don’t see any red or grey lightning bolts on your MoviePass app at all, it’s likely that the new system just hasn’t come to your area yet. Indeed, it seems that most subscribers don’t have it at this time. But MoviePass says it plans to roll the system out gradually over the next several weeks, so prepare yourself to start getting hit with the added fees soon.

On its website, MoviePass makes clear that it is implementing this surge pricing plan so that the business can stay afloat and the monthly rate of $9.99 does not need to be increased. “By developing demand pricing, we are working to ensure we can continue offering our low monthly rate for a movie a day,” MoviePass says.

These changes come just as MoviePass’ first major competitor from a major chain has arrived: AMC A-List. This plan is $19.99 per month, and it allows you to see three movies per week. Although it’s more expensive than MoviePass and doesn’t let you see as many movies, some of the key benefits include the ability to reserve seats in advance, to see the same movie more than once, and to see films in premium formats like 3D and IMAX.

Although MoviePass is certainly still a great deal, many subscribers are growing frustrated with the constant changes to the service. In recent months, MoviePass has also taken away the ability to see the same movie a second time. It’s clearly no coincidence that this feature was removed right before the release of Avengers: Infinity War, and now, peak pricing is going into effect right before Ant-Man and the Wasp.