‘Star Wars’: The Best Darth Vader Moments in the Saga

From the very first time moviegoers met him in 1977, Darth Vader has remained one of the most iconic and fearsome villains in cinema history. His dark suit, mechanical breathing, and mystical abilities cemented him in the minds of fans everywhere, and his story ultimately evolved into the center of the entire Star Wars saga. Voiced by James Earl Jones and embodied by David Prowse (in the original trilogy, at least), this Dark Lord of the Sith is the most unforgettable figure in George Lucas’ “galaxy far, far away,” and his impact is felt decades after he first swept into frame.

With the character still as alive as ever in the Star Wars franchise (thanks to appearances on Star Wars Rebels and a small, but pivotal role in Rogue One: A Star Wars Story), Vader is arguably as strong a presence in the public consciousness as ever before. That being said, we thought it would be a good time to look back on some of his finest moments in the films. For the record, we’re only considering the eight live-action Star Wars films (i.e., no Star Wars: The Clone Wars animated film), and the moments must consist of Vader himself and not the pre-Sith Anakin Skywalker.

10. A dark legacy (The Force Awakens)

Though Vader is long dead by the time this J.J. Abrams-directed entry takes place, the film reminds viewers of his impact on the current state of the galaxy, namely his connection to the villainous Kylo Ren. As Ren meditates to Vader’s helmet, we learn just how much he reveres his predecessor in evil.

9. Before the Emperor (Return of the Jedi)

After taking a trip to Jabba’s palace and visiting the Ewoks, the third act of this chapter hones in on both the assault on the second Death Star and a loaded confrontation between Luke, Vader, and the Emperor. It is here that hero and villain face off for the last time, in what may be one of the saga’s most dramatic moments.

8. Rebirth of Vader (Revenge of the Sith)

Following a fateful duel with Obi-Wan, Anakin undergoes a procedure that not only saves his life but reinvents him as the Emperor’s loyal, black-armored second-in-command. For longtime fans, this moment serves as one of the film’s standout moments, as Anakin completes his transition into the Sith we know and love to hate.

7. Counsel with the Emperor (The Empire Strikes Back)

In A New Hope, Vader is positioned as the most badass villain in the galaxy, but the films sequel reveals that he is ultimately beholden to the Emperor just like the rest of the Empire. Though the scene has been tinkered with over the years, the moment where Vader bows before Palpatine and emerges subservient adds a new layer of complexity to the character.

After nearly two decades, Vader and Kenobi cross lightsabers once again. Though the choreography is painfully limited compared to more recent efforts, the dramatic weight of these friends-turned-enemies dueling to the death (and Luke’s punctuating scream) still hits us every single time we watch it.

5. The Jedi Purge (Revenge of the Sith)

Lest we forget, Vader’s inaugural act as a Sith was his betrayal of the Jedi Order, a decision that directly and indirectly led to the deaths of most of the Jedi spread throughout the galaxy. The heart-wrenching montage of fallen Jedi Masters makes a lasting impression, as does the newly dubbed Darth Vader’s leadership of the death squad entering the Jedi Temple.

Even in the movies, first impressions are extremely important, and as we mentioned upfront, Vader’s is one for the ages. Emerging from the smoke to John Williams’ indelible score, he strides into the blockade runner ready to hunt down the Death Star plans and deliver swift punishment to those responsible (ooh, stay tuned).

3. With my own eyes (Return of the Jedi)

Viewed as a complete tale of Anakin’s fall and redemption, the first six episodes of the saga take a turn when Vader chooses to save his son and defeat the Emperor. Though we nearly went with that scene, the one that follows it — in which Anakin shares a brief moment of connection with his son before his death — packs an emotional gut punch that we couldn’t ignore.

2. Father and son (The Empire Strikes Back)

There’s no way we could have a list of Vader’s best moments without this one. After an intense battle with Luke, Vader reveals the truth of their familial connection. With that, one of the best movie moments of all time is born. Back in 1980, this scene blew audiences’ minds; though the element of surprise has faded, it still makes for an incredibly compelling twist. 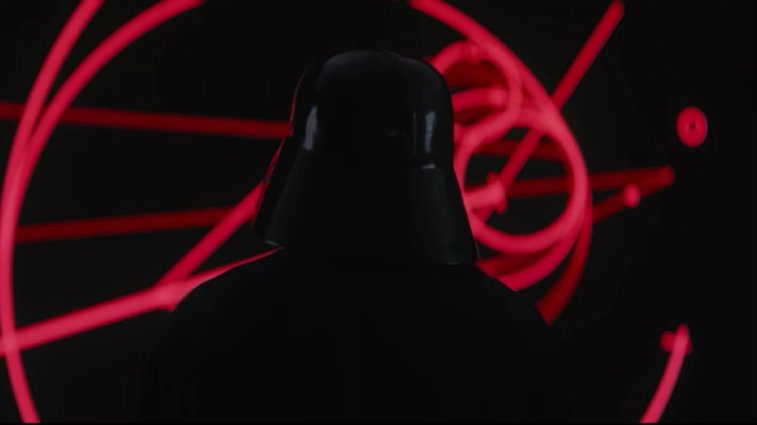 Amazingly, Vader’s very best moment — in our eyes, anyway — isn’t in any of his classic film appearances, but in his most recent role. Just minutes before the credits role on this anthology film (which deftly sets up A New Hope), audiences finally see Vader unleashed like never before. In less than a minute, the Sith Lord proves why he is so feared, tearing into a group of Rebels in pursuit of the Death Star plans. No wonder he’s so mad when A New Hope begins. A instant classic movie moment.