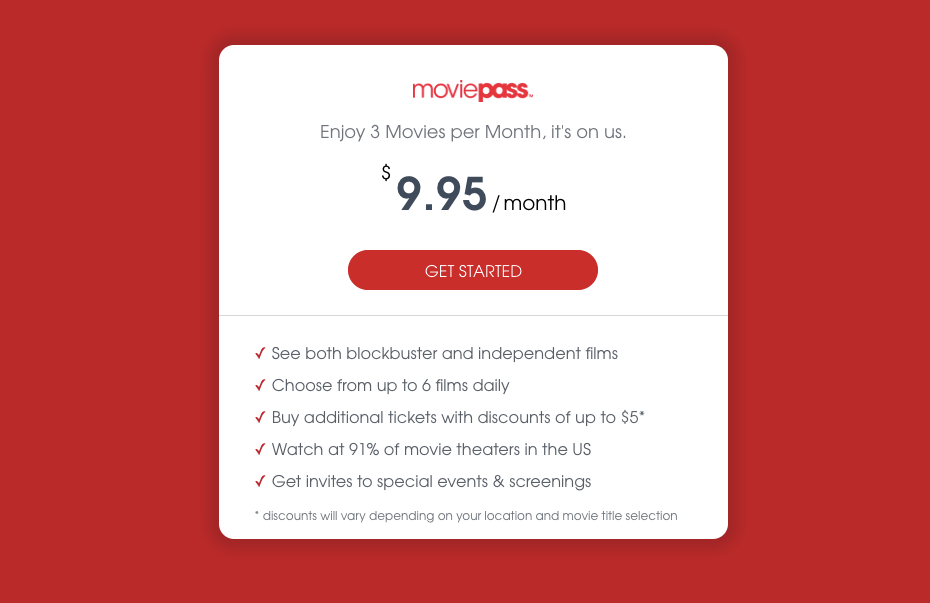 When MoviePass blocked nearly every movie but Slender Man this past weekend, subscribers assumed this was just a temporary thing and that the limited showtimes would end once the new three-movies-a-month plan rolled out. But now, MoviePass’ website is suggesting otherwise.

Today is the official launch of the new MoviePass plan, which replaces the old one-movie-a-day one. With the new plan, the price is still $9.99, but you can only see three movies a month. Still, subscribers were mostly willing to stay on board assuming all showtimes would be available and they could choose from more than just Slender Man.

But for the launch of the new plan, the MoviePass website has been updated, and it promises users that going forward, they will be able to “choose from up to 6 films daily.” This is a crucial bit of information that was absent from previous announcements about the new plan, and it appears to confirm that the limited showtimes aren’t going anywhere.

After all, there are way more than six films playing in the average movie theater at once, so this is guaranteeing that you’re going to be getting a smaller selection as a permanent fixture of MoviePass. Plus, the key here is the phrase “up to,” which indicates that there will often be less than six movies available. That would mean that a situation like this past weekend, during which subscribers only had access to Slender Man and a few limited release films, might actually continue on a permanent basis.

It’s noteworthy that the website doesn’t clarify whether all showtimes will be available; it just says that all movies will be available. So that leaves MoviePass room to offer only 10:15 p.m. screenings of Slender Man and still technically meet the terms of the agreement.

MoviePass’ website also says that under the new plan, you’ll be able to see “both blockbuster and independent films.” That probably means that at least one or two of the possible six slots will be taken up by limited-release movies like The Miseducation of Cameron Post. So if you frequent a major chain that doesn’t get a lot of limited-release movies, it’s definitely possible that at any given time, only one or two movies at that theater will be available through MoviePass, and you’ll have no clue what movies those will be. In addition to this, MoviePass previously said blockbuster films wouldn’t be available for the first two weeks, although they seem to have gone back on this considering The Meg was available with surge pricing at some theaters this past weekend, and Slender Man just opened on Friday.

This really changes things for a lot of subscribers, some of whom were planning on sticking with MoviePass but who are now planning to unsubscribe upon realizing that the showtimes and movies disappearing was not a temporary thing. To stick with MoviePass now, you just have to accept that you won’t be able to see a lot of the films you want to see with your card, and the selection of films is going to be extremely limited and completely unpredictable.

If you’re planning to cancel your account now, just keep in mind that you’ll want to monitor your bank account after doing so. After all, a lot of users have had issues with canceling, and some have even been charged after the fact.