‘Nathan for You’: The Greatest Reality TV Show Ever? 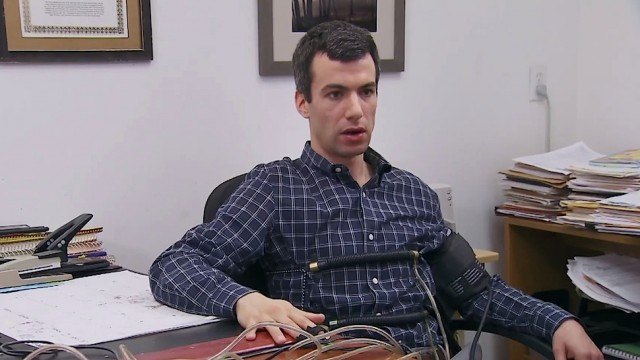 In many ways, Nathan Fielder is unlike any other reality television host out there. In many other ways, he’s exactly like any other reality television host out there. Like other reality hosts, the deadpan host of Comedy Central’s hilarious Nathan For You dons an onscreen persona to interact with the normal people who come to him seeking advice on finding success in running their small businesses, using the persona and the medium to get some kind of interesting reaction from the people.

The difference is that most reality television hosts are either warm and friendly or prickly and demanding (think Gordon Ramsay on Kitchen Nightmares), while Nathan Fielder, playing a character who shares his same name, is confusingly flat in his affect. He’s clueless and deadpan and prone to making awkward silences significantly more awkward, just to see how people react. And everyone reacts differently to the odd character Fielder portrays, especially confused to see that he seems to have his own television show.

But the show isn’t just about Fielder’s endlessly awkward character. Almost every episode revolves around the bizarre schemes he proposes to the small business-owners seeking his help. The schemes make some kind of capitalistic sense but generally ignore certain legalities or rules of human natures. Highlights include changing a coffee shop’s name to “Dumb Starbucks,” advertising for a pet store in a pet cemetery, and offering a mail-in rebate on gasoline accessible only to those who hike to a mailbox on top of a mountain.

These schemes are funny in concept alone, but they’re far funnier because Fielder manages to convince real, levelheaded people to go along with them. Such is the effect of reality television — the people seek to present their best selves while they’re being filmed, so they trust Fielder against their better judgment. It doesn’t hurt either that Fielder never offers them a way out — simply by staying silent and asking tough questions of his guests, he can prod them into going along with anything out of plain and simple politeness.

If this sounds a touch cruel, that’s because Nathan For You sometimes does toe the line between funny and cruel, but the show’s iffy morals make it into an even sharper satire of reality television. All reality shows manipulate their subjects in some way — Survivor is built upon testing the breaking-points of its participants — but only Nathan For You invites viewers to realize the effect a camera crew can have on a normal person, and even to wonder what effect it would have on us.

The show isn’t actually mean-spirited. I can’t think of a guest who has been actively hurt by Nathan’s actions, though many have found themselves baffled or even mortified. Nathan is too sedated and blank and honest in his intentions to bully anyone into compliance. Instead, the guests themselves choose to take a leap with him, neither one of them realizing what their decision might mean. Many of the show’s most hilarious moments come from Fielder being caught off-guard, nearly breaking his implacably bland persona out of shock, as he does when a gas station owner discusses why he drinks his grandson’s urine (yes, that happened, and it’s as bizarre as you’d imagine it to be).

Because he inhabits his character so fully, one can wonder about Fielder’s intention with the series. “Is he laughing at these people?” many will ask, understandably so. I think that Fielder is motivated not by mean-spirited derision, but by sympathetic fascination. He’s been decidedly tight-lipped about himself and his series, but in a recent, fascinating interview with the AV Club, he explained how he’s interested in the way corruption comes into being, saying, “It all came down to these minor interactions that people would have with each other where someone would know something’s wrong or unethical, but the other person just wouldn’t want to speak up because the social environment wasn’t conducive to that.”

Suddenly, the perspective behind Nathan For You makes total sense: Fielder talks people into insane things simply by creating a social environment, using his persona and his camera, that isn’t conducive to protest. Consider the scene in the pet cemetery, when a pet cemetery worker comes to complain about Nathan’s enormous headstone advertising a pet store. Nathan offers him a thousand dollars, and suddenly the tasteless tombstone is no problem.

Not to sound too lofty, but this is a show about humanity, and the way we react to bizarre or uncomfortable situations. So much comedy is founded upon discomfort, but the difference here is that the people and their reactions are real and often stranger than what any of us could imagine. Nathan For You could just as easily be screened in a psychology class as on Comedy Central, as it often plays like an in-depth study in human nature and capitalist psychology.

But here I am, making the show sound like some sort of boring educational video, when it’s actually a delightful show, whether you want to think about the implications of it or not. It’s even occasionally touching, mostly because of how well Nathan plays his character. He may be stonefaced, but he isn’t unfeeling. In fact, he’s constantly looking for some kind of connection, misreading politeness as willingness to be his friend or even girlfriend. He’s perpetually unsuccessful, however, and one bullying guest even dubbed him “the wizard of loneliness.”

In one instance, he gets intensely personal quickly with one man, who explains that he’s divorced and says, “Yada yada yada, she married her ex-boyfriend, and I’m in LA training dogs.” It’s the sort of pain that people rarely discuss, let alone on national television. It’s thanks to Nathan For You‘s unusual willingness to explore the most uncomfortable avenues of human interaction that we can see such touching candor beside such head-scratching hilarity.