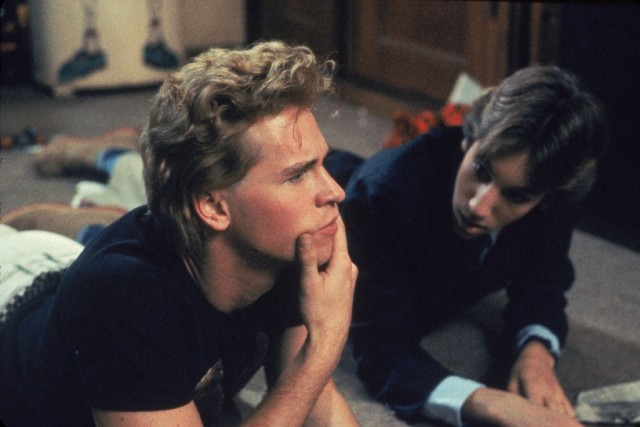 In the latest of a constantly growing list of Hollywood reboots, NBC is reportedly developing a single-camera comedy series based on the 1985 movie Real Genius. According to Deadline, the network is teaming up with Adam Sandler’s production company, Happy Madison; 3 Arts Entertainment; and Sony TV to develop the show.

The original wacky ‘80s comedy starred Val Kilmer as brilliant physics student Chris Knight, who is in his last year at the fictional university Pacific Tech when he gets recruited by a professor to work on a secret laser project for the CIA alongside freshman student Mitch Taylor (played by Gabriel Jarrett). What they don’t know is that the government plans to use the laser as a weapon. The charming, if slightly cheesy, film earned widely positive reviews in its debut and performed well for the studio, earning around $13 million at the box office. Even more notable though, is the cult fan base the film has garnered since its initial debut — something NBC is clearly looking to bank off with the creation of this potential new show.

From the sounds of it, fans shouldn’t expect the series to stick entirely to the movie’s plotline. Per Deadline, the new TV version will be a “present-day reboot of the cult film, set as a workplace comedy.” Written by Workaholics co-executive producer Craig DiGregorio and Parks and Rec’s David King, the series will reportedly follow the relationship between a hotshot tech genius (similar to that of Kilmer’s character from the film) and his young, naïve new co-worker (meant as a modern-day interpretation of Jarrett’s character).

The series has reportedly already received a script commitment plus penalty, which means there’s a solid chance we’ll eventually see it on TV. Obviously, the network has confidence in the project, which isn’t entirely surprising, given the built-in following Real Genius already has. Still, that may not be the only rationale behind green-lighting the project now. If you though the show’s plot description sounds vaguely familiar, you wouldn’t be the only one. Some are already pointing out the seeming similarities between the described Real Genius and the hit CBS sitcom The Big Bang Theory.

It’s a fair comparison. After all, both are sitcoms that revolve around awkward geniuses whose own intelligence can sometimes get them into trouble. Plus, as viewers know, The Big Bang Theory often functions similarly to a workplace comedy, with many of its scenes taking place in a lab or one of the character’s offices in the university where they work (not to mention, the many jokes that have been cracked over a lunch table in the university’s cafeteria). Thanks to the huge success of the show, nerdy and socially inept characters are now rising in popularity on the small screen. It’s a market that CBS is clearly looking to dominate, both with Big Bang and its just-premiered new dramedy Scorpions. But the former becoming such a huge hit could very well be another reason why NBC is deciding to push a Real Genius reboot now.

As it stands, news of the potential series is already drawing some strong reactions from fans of the original film, most of whom seem hesitant to jump onboard the concept of a small-screen remake just yet. Then again, the project is still in the early stages, so perhaps casting and further details will help change their minds about the show as it develops.