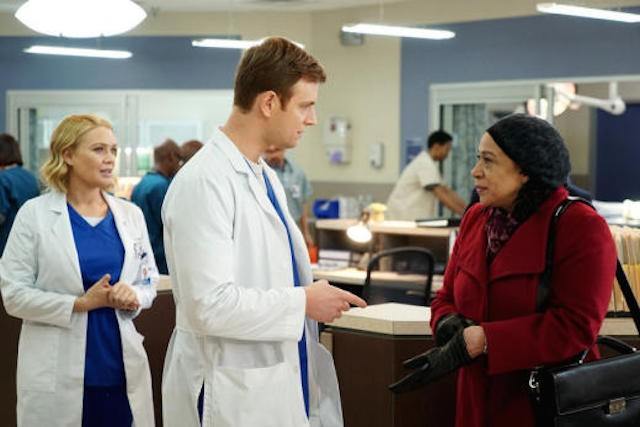 NBC is getting a head start on the fall TV season by adding three new dramas to its lineup. The network has officially issued series orders to the Chicago Fire spinoff Chicago Med, the thriller Blindspot, and the doctor drama Heartbreaker.

Starring Oliver Platt, S. Epatha Merkerson, Laurie Holden, Nick Gehlfuss, and Yaya Dacosta, Chicago Med is described as an “emotional thrill ride” exploring the day-to-day chaos of the city’s most explosive hospital. It follows the courageous team of doctors as they tackle unique new cases and forge tumultuous relationships in the turmoil of the emergency room. Viewers got their first glimpse at the new medical drama in April, when a backdoor pilot for the series aired during the latest season of Chicago Fire. The introductory episode performed well and the project has been expected to go to series since.

With its pickup now confirmed, Chicago Med will become the fourth Dick Wolf-created drama on NBC next season and the third in the Chicago-based franchise. The network also airs Wolf’s Chicago Fire, Chicago P.D., and Law & Order: SVU. Given the nature of the spinoff, audiences should definitely expect to see familiar faces from both of the Chicago series to appear in the newly green-lit show, as well as a potential crossover with SVU. The show will likely premiere midseason, as Chicago P.D. successfully did in the past.

Chicago Med isn’t the only new medically themed series on NBC’s slate. The network also gave the go-ahead to Heartbreaker (formerly known as Heart Matters), a drama on the achievements of real-life surgeon Dr. Kathy Magliato. The series stars Melissa George (The Slap) as Dr. Alex Panttiere, an outspoken world-renowned heart-transplant surgeon. As one of the few women in her field, Alex is stubborn and fearless. In additional to managing the daily demands of a skeptical faculty and consistently pushing the boundaries of medical science, Alex also enjoys a racy personal life that’s a full-time job in itself.

The third drama that NBC recently picked up to series is the mystery thriller Blindspot. Jaime Alexander stars as a beautiful Jane Doe who is discovered naked in Times Square, completely covered in mysterious, intricate tattoos with no memory of who she is or how she got there. But one tattoo in particular stands out very clearly: the name of FBI agent Kurt Weller, emblazoned across her back. “Jane,” Agent Weller, and rest of the FBI soon realize that each mark on her body indicates a crime that needs to be solved, leading them closer to the truth about her identity and the mysteries to be revealed

Sullivan Stapleton, Audrey Esparza, Rob Brown, and Marianne Jean-Baptiste co-star in Blindspot, while Greg Berlanti executive produces. Berlanti is known for his work on the CW’s superhero hits Arrow and The Flash, as well as the coming Arrow-Flash spinoff.

The Chicago Med, Heartbreaker, and Blindspot orders make them the first dramas of NBC’s 19 new pilots to get green-lit. Other pilots reportedly in serious contention are Warrior, Game of Silence, Silvio Horta’s The Curse of the Fuentes Women, Love Is a Four-Letter Word, and The Player, the latter of which reportedly received permission to begin staffing earlier this month. With the new additions, the network now has a total of six new dramas slated for next season. Already on its upcoming slate are the Jennifer Lopez cop drama Shades of Blue, the Wizard of Oz-themed Emerald City (which was recently brought back from cancellation), and the event series Heroes Reborn, slated for fall.

On the comedy side, the network has already granted straight-to-series orders to the Coach revival, starring Craig T. Nelson, and the Eva Longoria-starring Telenovela. Earlier this year, it issued a six-episode series order to the Jerrod Michael comedy pilot.

NBC’s three new dramas mark only the beginning of the series order stage of pilot season. Audiences can expect a flurry of pickups from NBC and other networks over the next several weeks.