‘Neighbors 2′ Might Be a Box Office Hit, But Will It Be Funny? 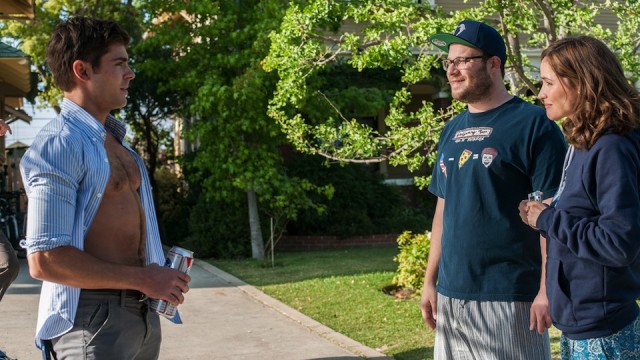 Seth Rogen’s The Interview may have been the one to make headlines recently, but it’s Neighbors, his raunchy flick with Zac Efron, that’s getting the sequel. Universal is moving forward with a follow-up to the comedy that premiered to huge success last summer.

According to The Hollywood Reporter, all of the principal leads, including Rogen, Efron, and Rose Byrne, will reprise their roles in the coming sequel. Neighbors starred Rogen and Byrne as a couple with a new baby, who end up in all-out prank war with a fraternity, after all of its members move in next door and keep them up at all hours of the night. At the end of that movie, Efron’s character graduated. So what’s going to bring him back this time around?

Per THR, Neighbors 2 will feature the couple facing off against a raucous sorority instead. They then enlist Efron and their other former nemeses from the fraternity to help battle their new enemies — the equally loud sorority sisters.

Original director Nicholas Stoller will return to the project, as will writers Andrew Jay Cohen and Brendan O’Brien. Rogen, Evan Goldberg, and James Weaver — who also worked on The Interview together— will produce Neighbors 2 via their Point Grey Pictures banner, as well as do some writing for the project. Good Universe, which has collaborated on several films with Point Grey including the first Neighbors and This Is the End, is also producing. Cohen and O’Brien will also serve as executive producers.

Rumors of a Neighbors 2 first started swirling almost immediately after the original film’s release, with Rogen and Goldberg confirming to Deadline that they were “taking a lot of meetings” to discuss the possibility. It’s not exactly surprising that Universal would want to get a follow-up into gear so quickly. Neighbors was a surprise hit last summer, grossing almost $50 million in its opening weekend. It eventually ended up earning more than $268 million worldwide against an $18 million budget, making it the top-grossing original comedy of 2014. Those numbers are especially impressive, considering the no-holds-barred flick was rated R. It also earned relatively favorable reviews, with a 73% fresh rating on Rotten Tomatoes.

Whether Neighbors 2 can cleverly pull off an almost identical plotline for a second time remains to be seen. For countless popular comedies, a sequel often means more box office success, but also a much harsher critical reception. Just see The Hangover Part II and Part III for proof. There are rare exceptions: 22 Jump Street earned over $331 million at the box office, as well as mostly positive reviews – largely because the entire film was used to goofily poke fun at its own repetitiveness.

With its charismatic leads returning and much of the original creative team back on board, Neighbors could potentially achieve something similar and use the coming sequel take the franchise out on a high note, both critically and commercially.

Neighbors 2 is currently scheduled to hit theaters on May 13, 2016.