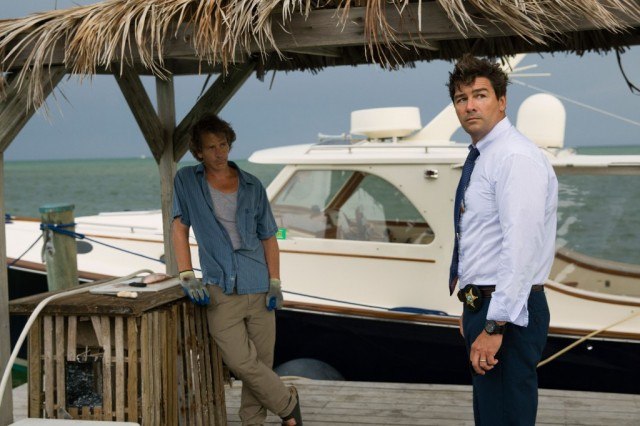 It looks like Kyle Chandler’s highly anticipated return to TV will be a triumphant one. The Friday Night Light alum’s new show, Bloodline, premieres Friday, and critics are already labeling it another quality hit for Netflix — one on par with the service’s other acclaimed originals, House of Cards and Orange Is the New Black.

Created by Todd A. Kessler, Daniel Zelman, and Glenn Kessler (the same team behind FX’s Glenn Close drama Damages), the new 13-episode series is a dramatic thriller that explores the demons lurking beneath the surface of a contemporary American family. It centers on the Rayburns, a close-knit, hardworking family of four adult siblings who are well-respected in their Florida Keys community. But their relationships with each other are put to the test when the black sheep brother comes back into town with a drug addiction and tons of debt, and threatens to expose the respected family’s dark, shameful past.

The show has been generating buzz for months, in large part due to its star-studded ensemble cast. Chandler plays John, the golden child who works as a local detective with the sheriff’s office. Norbert Leo Butz and Linda Cardellini portray two of his siblings, the volatile boatyard owner Kevin and the levelheaded lawyer Meg. Sissy Spacek and Sam Shepard play the family matriarch and patriarch. Rounding out the Rayburn clan is Ben Mendelsohn, who portrays the troubled, havoc-wreaking brother Danny.

With a cast like that, it perhaps shouldn’t come as a surprise that the series has already been incredibly well-received among reviewers, some of whom have likened the show’s tone to that of The Sopranos and Showtime’s current Golden Globe-winning drama The Affair.

Just like those shows, Bloodline contemplates tumultuous family dynamics and forces viewers to contemplate how far they’d go if it were their own loved ones at stake. “The Rayburns, they all think they’re good people. But the show asks, at what point are you a good person doing a bad thing or just a bad person who doesn’t realize it?” Cardinelli explained to Elle of the clan at the heart of the show.

That examination plays out at a suspenseful but well-timed pace that Chandler once described as that of a “13-hour movie.” Though each of the character’s background stories reportedly unspool slowly, it’s clear the actual drama starts quickly, often moving back and forth in time between incidents to keep viewers on their feet. Each dark deed takes place against the backdrop of the Keys — lush and often pristine, but also unpredictably stormy.

It’s these elements, coupled with the show’s talented ensemble, that has already earned the drama such high praise. Netflix lands “another forceful punch with Bloodline, a riveting, superbly cast slow-burn family drama” that serves up “startling moments in meticulously measured doses,” The Hollywood Reporter wrote of the series, later adding: “If the writers can sustain this level of intrigue, they have a truly compelling longform thriller on their hands.”

Variety agrees, calling it a “very good, extremely well-cast” series and adding, “Even without flashy bells and whistles, this sort of serialized drama would still seem to be ideally suited to its distribution approach.” In other words, it’s a good thing that Netflix is releasing the entire first season at once, because once you start watching, you won’t want to stop.

Between its juicy plotline and talented roster, it looks like Netflix has officially found its next hit — and viewers have found their next addictive show to binge-watch. The entire first season of Bloodline becomes available for streaming on Friday.