Netflix is launching a slew of new original series in 2016 to go along with the latest seasons of critically acclaimed favorites like House of Cards, Orange Is the New Black, and Marvel’s first solo hero show, Daredevil. This year, a variety of new comedies, dramas, and comic book-inspired series will become available for streaming. Here are 16 Netflix original TV shows set to premiere in the coming months.

After leaving her post as the host of E!’s Chelsea Lately, Chelsea Handler is returning to television with a new show. In the four-part docu-series Chelsea Does, the comedian will reportedly explore “topics of personal and universal fascination, from marriage to drugs, to racism and Silicon Valley.” The documentary series is only the first show she’s working on for Netflix. A new still-untitled talk show will air next year.

Co-created by Judd Apatow, the upcoming comedy series will be a “down-to-earth look at dating,” exploring male and female perspectives on romantic relationships through the characters Mickey and Gus, played by Gillian Jacobs (above) and Paul Rust respectively. The show does not have a confirmed premiere date yet, but its 10-episode first season is expected to kick off in 2016, and it has already been green-lit for a 12-episode second season in 2017.

The Netflix revival of the classic sitcom will center on the recently widowed D.J. Tanner-Fuller (Candace Cameron Bure), who is now a veterinarian and a mother of three sons. Similarly to the premise of the original show, she enlists the help of her sister Stephanie (Jodie Sweetin) and her best friend Kimmy (Andrea Barber) — who is now a mother to a teenage girl named Ramona — to move in and help her raise her boys after her husband, Tommy, dies. John Stamos, Bob Saget, Dave Coulier, Lori Loughlin, and Blake and Dylan Tuomy-Wilhoit will reprise their original roles.

Co-created by Will Arnett, the upcoming series stars the actor as Chip, a celebrated longtime resident of the insular world of Venice, Calif., who falls for the object of his best friend’s fascination. Soon the tangled web of half-truths and semi-bullshit that underpins his all-important image and sobriety begins to unravel. Chip is a man doing his honest best to stay one step ahead of his own lies. Ruth Kearney and Christopher Mintz-Plasse are set to co-star.

Set on a Colorado ranch, The Ranch is a sibling comedy that stars Ashton Kutcher as he returns home after a brief semi-pro football career. After he returns, he begins running the family business with his brother, played by Danny Masterson. Unlike its usual method of release, Netflix won’t make an entire 13-episode season available for streaming all at once. Instead, the first season of The Ranch will consist of a total of 20 episodes that will be released in two separate 10-episode batches.

Netflix’s first French-language original series is described as a tale of power, corruption, and redemption. It stars Gerard Depardieu as Robert Taro, the mayor of the Southern French city for 25 years. The upcoming elections have him face the man he chose as his successor, an ambitious young politician, played by Benoit Magimel. Géraldine Pailhas, Nadia Farès, Pascal Elso and Gérard Meylan co-star in the eight-episode series.

Comedian Maria Bamford will star in this upcoming comedy series, which will reportedly be a mockumentary based on Bamford’s life. Netflix describes the series as the “telling of a story of a woman who loses — and then finds — her s–t.” The first season will consist of 13 episodes.

Set in 1980 Indiana, the show takes place after a young boy seemingly vanishes into thin air. As friends, family, and local police search for answers, they are drawn into an extraordinary mystery involving top-secret experiments, terrifying supernatural forces and one very strange little girl. Winona Ryder will star as Joy, the single, working-class mother of the missing young boy. David Harbour, Finn Wolfhard, Noah Schnapp, and Millie Brown will co-star.

Created by Moulin Rouge and The Great Gatsby director Baz Lurhmann, The Get Down will take place in the broken-down, violent streets of 1970s New York. It’ll follow a group of South Bronx teenagers, who end up changing the city and the music industry, despite having no one to rely on but each other. The show chronicles the rise of hip-hop, punk, and disco in the then financially distraught city through their eyes. Jimmy Smith, Justice Smith, Herizen Guardiola, Shameik Moore, and Skylan Brooks co-star.

Netflix’s collaboration with Marvel continues with its third solo hero series, Luke Cage. The show will star Mike Colter as the titular character (who already made his debut in this year’s critically acclaimed Jessica Jones), a wrongly accused man who gains super-strength after a sabotaged experiment and escapes prison to become a hero for hire. Simone Missick and Alfre Woodard are set to co-star, while Rosario Dawson will also reprise her role as Daredevil‘s Claire Temple.

The upcoming half-hour comedy series starring Colleen Ballinger as her character Miranda Sings. The series centers around “the oddball family life of Miranda Sings, an incredibly confident, totally untalented star on the rise who continues to fail upward by the power of her belief that she was born famous – it’s just no one knows it yet.” The show was developed by Ballinger and her brother, Christopher Ballinger, together with showrunners Perry Rein and Gigi McCreery. The eight-episode freshman season kicks off this fall.

Based on Peter Morgan’s play The Audience, the upcoming original decades-spanning drama follows the story of Queen Elizabeth II and the prime ministers who shaped post-war Britain. It will delve into two of the most famous addresses in the world — Buckingham Palace and 10 Downing Street — and the intrigues, romances, and machinations behind the events that shaped the second half of the 20th century. Claire Foy, Matt Smith, and John Lithgow will co-star in the series. The show is expected to hit Netflix sometime later in 2016.

Lorelai, Rory, and the rest of the Stars Hollow crew are back in action in Netflix’s revival of the beloved family dramedy. The series will consist of four 90-minute long episodes, each of which encompass a different season of the year. The entire original cast, including Lauren Graham, Alexis Bledel, Emily Bishop, and Melissa McCarthy, are set to reprise their roles in the highly anticipated revival. Per Netflix, A Year in the Life will follow along as “three generations of Gilmore women grapple with change and the complicated bonds of family during one year in Stars Hollow.” The series is expected to hit Netflix later this year. Update 7/27/16: Netflix has just confirmed the revival will premiere on November 25. 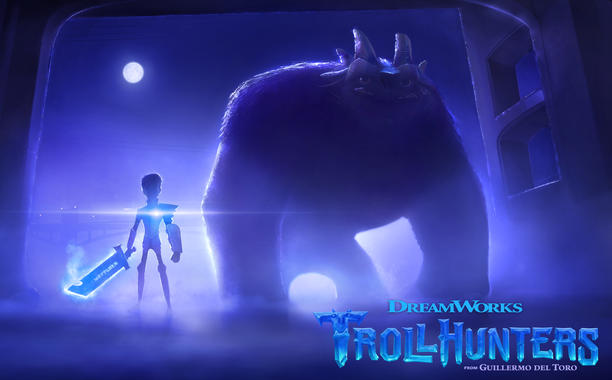 Based on a book by Guillermo del Toro, Trollhunters tells the story of friends who unearth a mystery underneath their hometown. Anton Yelchin, Kelsey Grammer and Ron Perlman lend their voice to characters in the upcoming series. This will be one of Yelchin’s final projects before his tragic death earlier this summer. Del Toro will executive produce alongside Marc Guggeinhem and Christina Steinberg.

Netflix’s drama series stars indie actress Brit Marling, who also serves as a writer and executive producer along with Zal Batmanglij. The streaming service is keeping the show’s logline under wraps but it is believed that the show will have some mystery elements to it. Batmanglij will direct, while Anonymous Content and Brad Pitt’s production banner Plan B will also produce. The show is expected to premiere sometime this year.