After Avengers: Infinity War, Marvel fans have never been more excited for a sequel than they are for Avengers 4. The plan is for this film to serve not only as the resolution of that massive cliffhanger but also as the finale of the Marvel Cinematic Universe’s first ten years. But the studio has barely revealed any details about it, not even giving it an official title yet.

However, photos from the set of the movie that came out a while back show that the film might be headed in a crazy direction, and they’re especially noteworthy after the release of Avengers: Infinity War.

Warning: This article will contain spoilers for Avengers: Infinity War. 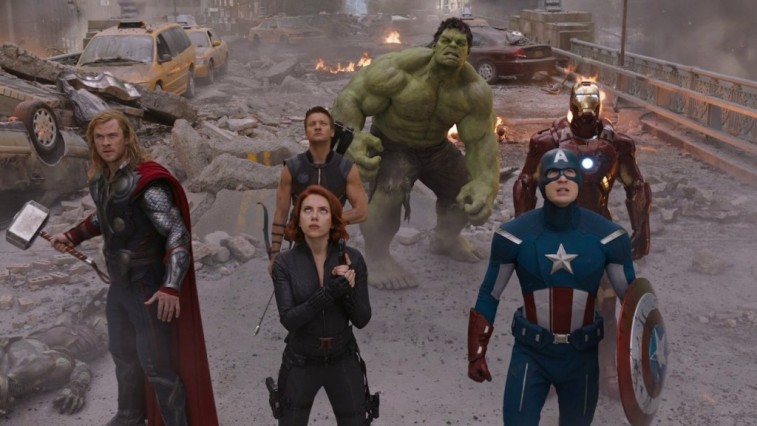 The Battle of New York from The Avengers | Marvel Studios

In set photos published by Just Jared, the first thing that stands out is what Captain America is wearing: his outfit from The Avengers. Steve Rogers’ suit has evolved quite a bit over time, with the one featured in that movie being the most old-fashioned. He stopped wearing that particular design years ago, yet he’s wearing it in these pictures. Captain America also doesn’t have a beard in these photos, whereas he has a beard in Avengers: Infinity War.

In general, this scene also appears to be the Battle of New York, the climactic sequence from The Avengers. Previous set photos have indicated that we might be returning to the Battle of New York. In one photo, Robert Downey Jr. was even seen wearing the exact same Black Sabbath t-shirt that he wears in The Avengers. In addition, there have also been photos of Tom Hiddleston as Loki looking exactly as he does in the first Avengers and Chris Hemsworth as Thor with long hair.

Next: But spotting this character means it can’t be a flashback.

But Ant-Man is there, meaning this can’t be a flashback 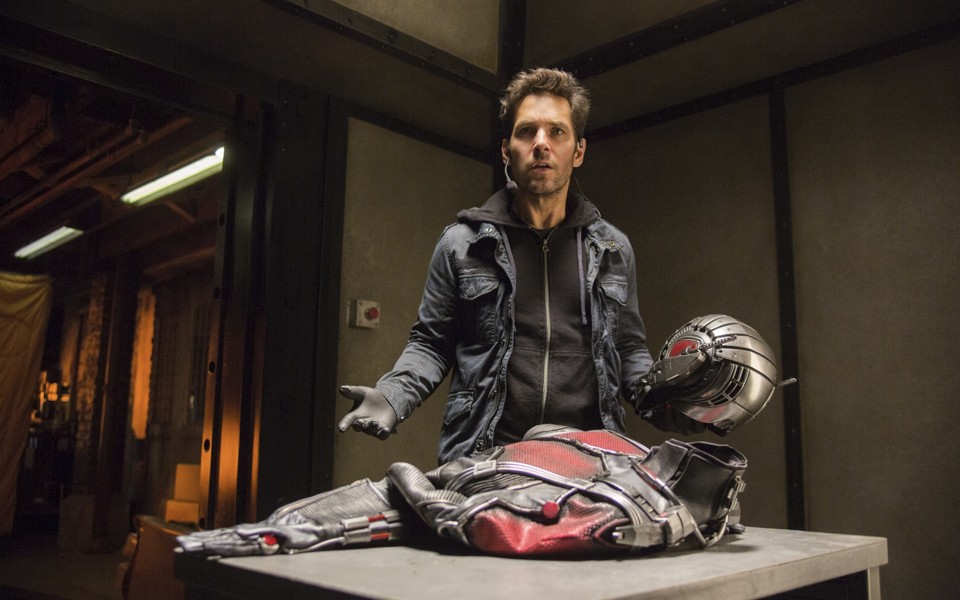 From these set photos combined and some older ones, you might just assume that we’ll be getting a flashback to Battle of New York in Avengers 4. Perhaps there’s some sort of a reveal about something else that took place that day, or there’s another reason the movie needs to return there.

But wait, that can’t be the case. Why? Well, in these new photos, Ant-Man is there. That means the scene in question could not possibly be a flashback because Ant-Man wasn’t at the Battle of New York. He wasn’t even a part of the Marvel Cinematic Universe until three years later.

Next: What are our favorite characters wearing in this photo?

Tony is wearing a S.H.I.E.L.D. outfit, and several characters are wearing devices on their hands 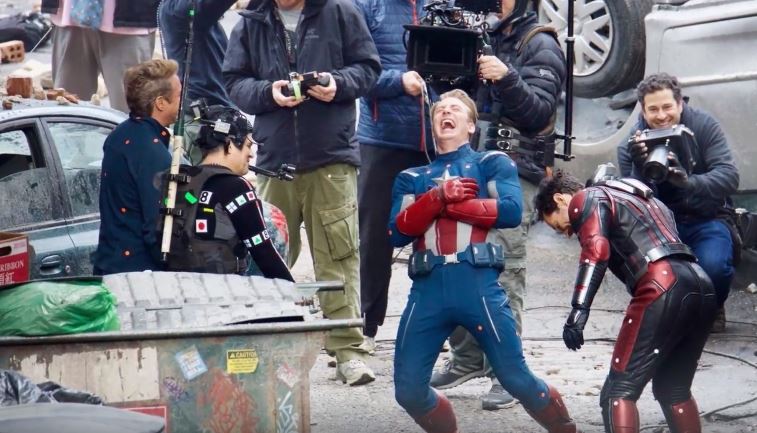 Another confusing element of this is what Tony Stark is wearing. It’s not his Iron Man suit, but rather a S.H.I.E.L.D. uniform.

This once again suggests it’s not a flashback. At no point in The Avengers did Tony ever wear anything like this. Earlier set photos show Downey Jr. filming in this same S.H.I.E.L.D. outfit in a different location, so he seems to wear it for more than one scene. Also, Captain America doesn’t have his mask on in the set photos, again suggesting this isn’t a real flashback.

Speaking of what people are wearing, Captain America and Tony Stark have weird, watch-like devices strapped to their hands. Ant-Man also has a similar device, although his appears to be built into his suit.

One last thing about the way the characters look: They’re all covered in orange dots, which will presumably be used in order to add in some visual effect later.

Next: Get ready for a wild ride in the storyline. 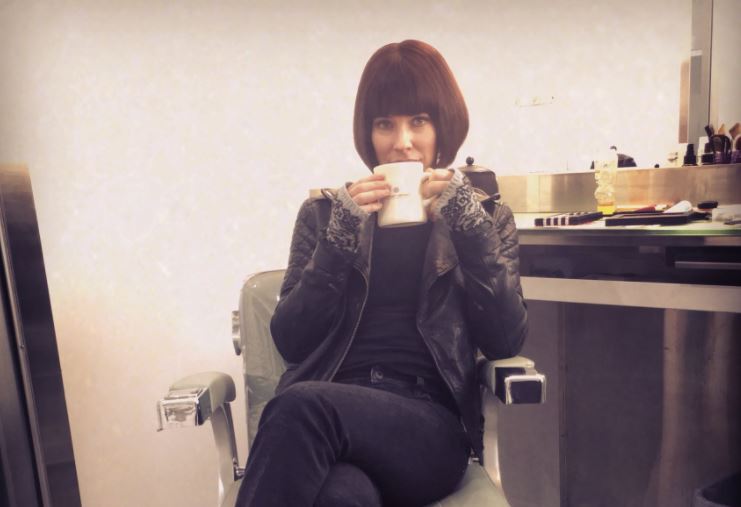 This could all suggest that Avengers 4 will feature a time travel plot, with the characters returning to events from the previous movies. That would explain why Ant-Man is at the Battle of New York when he wasn’t originally there. It could also explain the orange dots: Perhaps that’s so that the visual effects artists can add in an effect where the Avengers stand out in some way due to being from a different time.

From what we can glean from other set photos, there’s actually been a lot of evidence that the movie will involve time travel. In addition to all the photos of the Battle of New York, back in November, Evans was filming a scene that, based on the cars there, appeared to take place in the 1940s. Also, Evangeline Lilly posted a photo from the Avengers 4 set in which she has her old haircut from Ant-Man, not her new one from Ant-Man and the Wasp.

It’s also possible that the movie will involve a journey through alternate realities rather than time travel. The devices on everyone’s hands can be whatever is allowing them to move through time or through reality. Either way, from these photos, we know that we’re returning to the Battle of New York, and we know it’s not through traditional flashback means.

Next: Could this be the reason they are traveling through time?

Ant-Man could be the reason they’re traveling through time 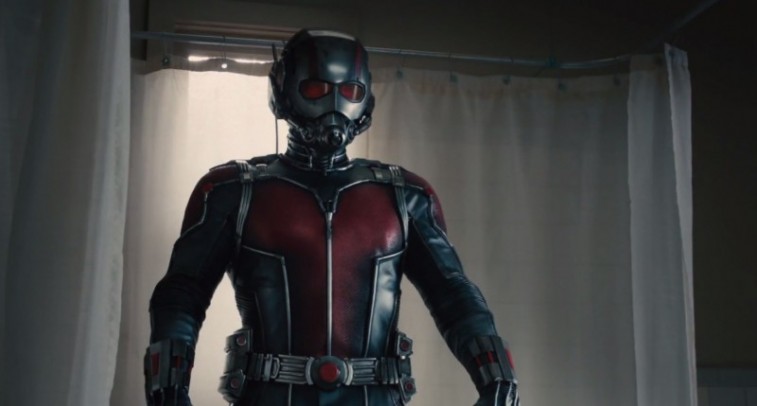 Could Ant-Man be responsible for this plot? | Marvel

So just what the heck is the plot of Avengers 4, anyway? Ant-Man could be the key. After Infinity War, Marvel’s next movie is Ant-Man and the Wasp.

It seems important that in the new photos, everyone’s device is physically strapped to their hand except for Ant-Man’s, as his is built into his suit. Perhaps the time-travel or reality-travel technology is developed by Hank Pym. Though Ant-Man and the Wasp takes place before Infinity War, it could explain the technology that will take center stage in Avengers 4.

As more evidence of this, Lilly told Vanity Fair that when she heard about the direction the Marvel movies are going in, it reminded her of Lost, a show that played around with time travel and with revisiting past events. “We are hitting that [Lost] Season 4 space where everything’s about to shift, and you’re about to lose the solid ground underneath you,” she said. “And [Ant-Man and the Wasp], of course, will play a part in that.”

Next: How Tony Stark plays into all of this

The scene could be Tony using his B.A.R.F. technology

Tony used this impressive technology to play out a moment from his past. | Marvel Studios

One much less exciting theory is that the Battle of New York scene is just Tony Stark using his Binarily Augmented Retro-Framing technology. This is what Tony used in Captain America: Civil War in order to relive the final conversation he had with his parents before their deaths.

Maybe, then, there’s a scene in Avengers 4 in which Tony uses this technology to go back to the Battle of New York. One would think this is not something he’d have time for in a movie as busy as Avengers 4. But a few months ago, MCU Exchange posted a photo of a prop on set labeled “Binarily Augmented Retro-Framing.”

Next: This is why the characters will be going on this journey 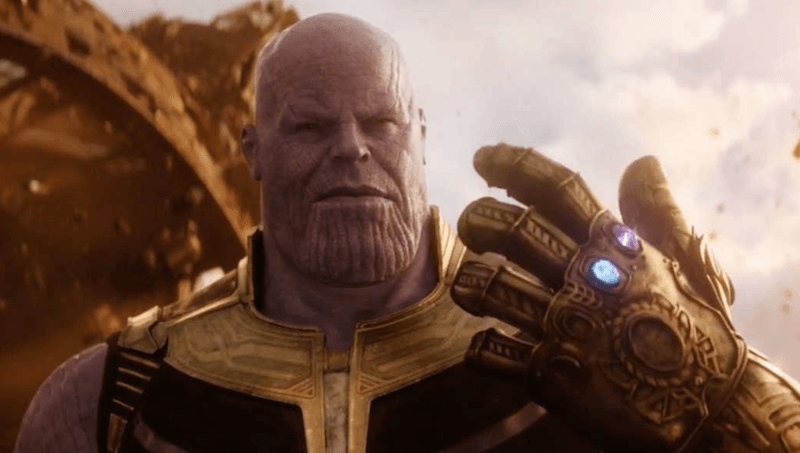 Thanos will most definitely use the Stones to his advantage. | Marvel

After seeing Avengers: Infinity War, these set photos become even more interesting. After all, the movie ends with Thanos wiping out half the universe, including half of the Avengers. Therefore, it’s reasonable to assume that the plot of Avengers 4 involves the surviving characters try to save those who disappeared.

Perhaps the Avengers need to make their own Infinity Gauntlet, collecting all the stones and using it to reverse Thanos’ actions. If that’s the plan, it would make sense to go back to the Battle of New York, since that’s where the Mind Stone once was. They could also go back to other locations where the stones have been known to be; this would explain why there was reportedly a scene being filmed that takes place in the 1940s, where the Space Stone once was.

Regardless of how it happens, it looks like Avengers 4 is going to be a trip down memory lane, and a tribute to the first decade of the MCU as the movies look ahead to a new era.